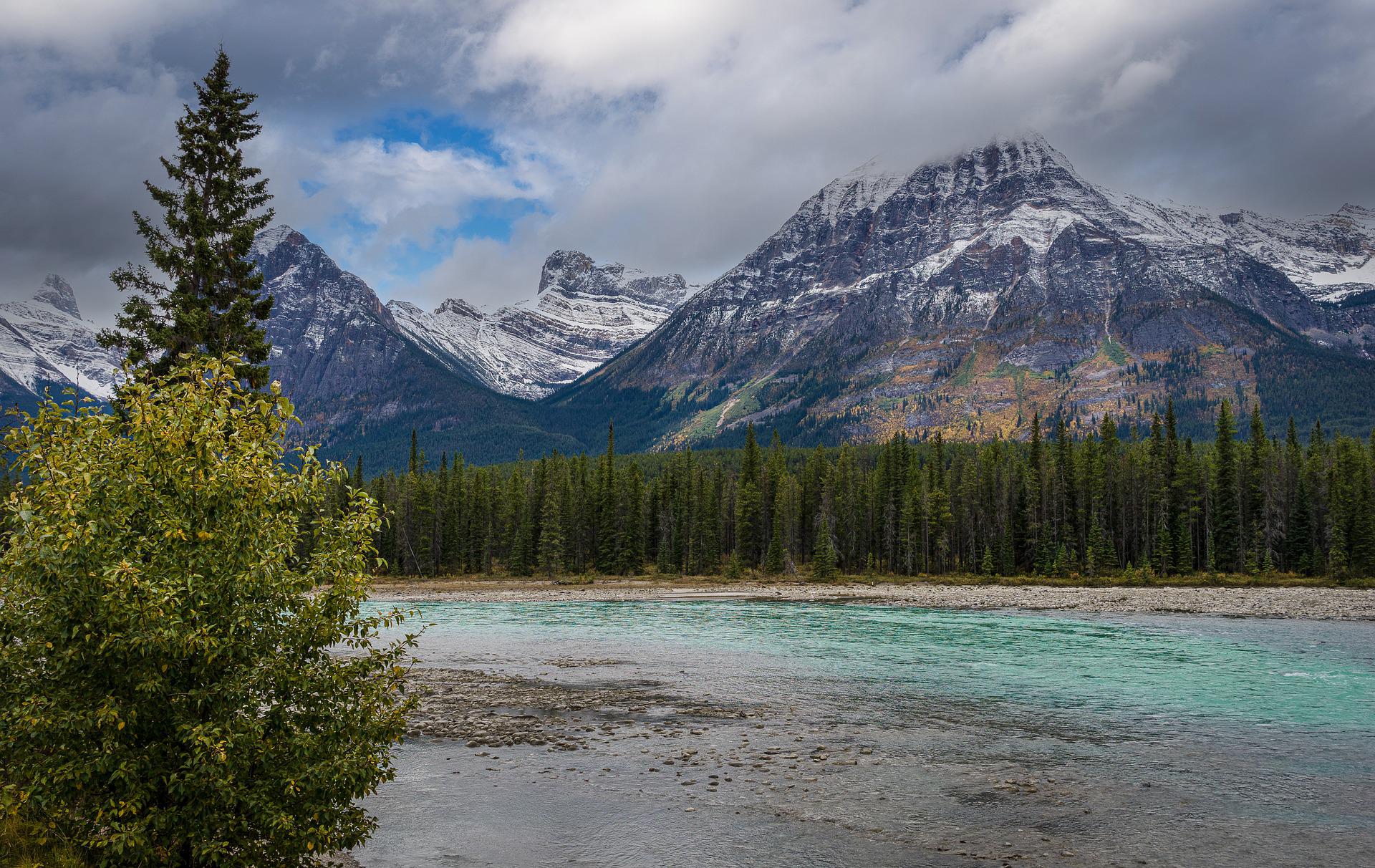 Half a century after the adoption of UNESCO’s World Heritage Convention, our planet faces multiple crises that threaten the very survival of the world’s cultural and natural heritage.

Urgent action is needed to protect these special places from conflicts, disasters, untamed development and the climate emergency. Governments alone cannot do it. To fulfil the promise of this 50-year-old landmark treaty, citizens and civil society around the world need to answer the call.

Fifty years ago on 16 November 1972, UNESCO’s General Conference adopted the Convention concerning the Protection of the World Cultural and Natural Heritage, commonly known as the World Heritage Convention. This international treaty was the culmination of lengthy discussions among experts and advocates in the separate fields of cultural and natural heritage conservation. First conceived as a World Heritage Trust at the 1965 White House Conference on International Cooperation, and later endorsed by the 1972 United Nations Summit on the Human Environment in Stockholm, the Convention landed at UNESCO for final negotiation and implementation within the UN system. 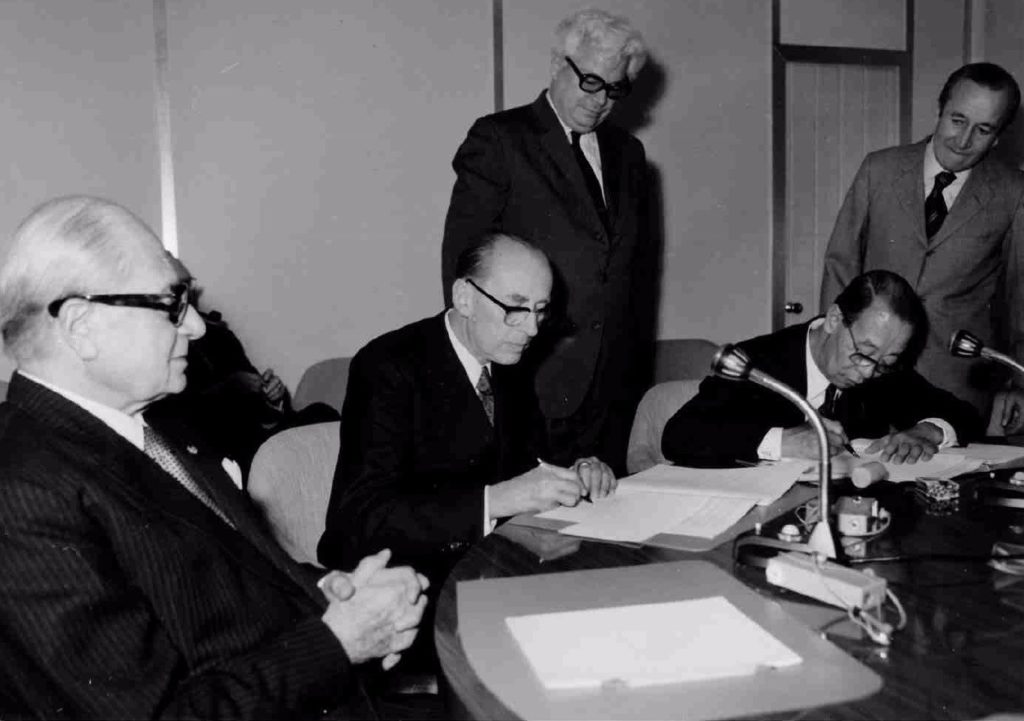 The initiative gained momentum as a response to changing social and economic conditions that were destroying places of cultural and natural significance. As an intergovernmental treaty, the primary responsibility for identifying, protecting, conserving and presenting these irreplaceable properties fall to national governments. Because many countries found the challenge beyond their financial, scientific and technological capacity, the Convention set out to establish an effective system of collective protection of the cultural and natural heritage of outstanding universal value, rooted in the belief that the loss of such places impoverished all peoples of the world.

Three innovations of the 1972 World Heritage Convention stand out: a holistic approach that links cultural and natural heritage protection together in one legal instrument; the institutionalization of a system of international cooperation for safeguarding heritage sites and for building human capacity; and a platform for intercultural dialogue and understanding.

Yet this treaty is much more than a designation instrument. Over its fifty years, the World Heritage Committee has developed sophisticated methods and tools to protect World Heritage Sites, to monitor their condition over time, to spell out corrective measures to address threats and natural decay, and to build human capacity that empowers site managers and stewards to take care of these special places.

Equally important is the creation of a global platform for dialogue and shared understanding of conservation principles and good practices. Governments, professional associations like ICOMOS, IUCN and ICCROM, as well as individual experts and scholars have all contributed to an enriched perspective on innovative practices. Among the achievements is a broader understanding of what constitutes cultural and natural heritage. In the early years, iconic architectural monuments, ancient archaeological sites and well-known nature parks topped the list. Over time, modest vernacular buildings, modern architecture and interconnected ecosystems gained popularity with a shift towards cultural, social, environmental and intangible values. In particular, the introduction in 1992 of a new category for cultural landscapes opened a productive vein that brings culture and nature closer together, thereby confirming the initial vision of the pioneers. Exploration of this rich vein continues today with various initiatives related to the nature-culture journey.

In Canada, implementation of the World Heritage Convention through time reflects these evolving perspectives. Take, for example, the differences between the inscription of the Canadian Rocky Mountain Parks in 1984 and Pimachiowin Aki (The Land That Gives Life) in 2018. 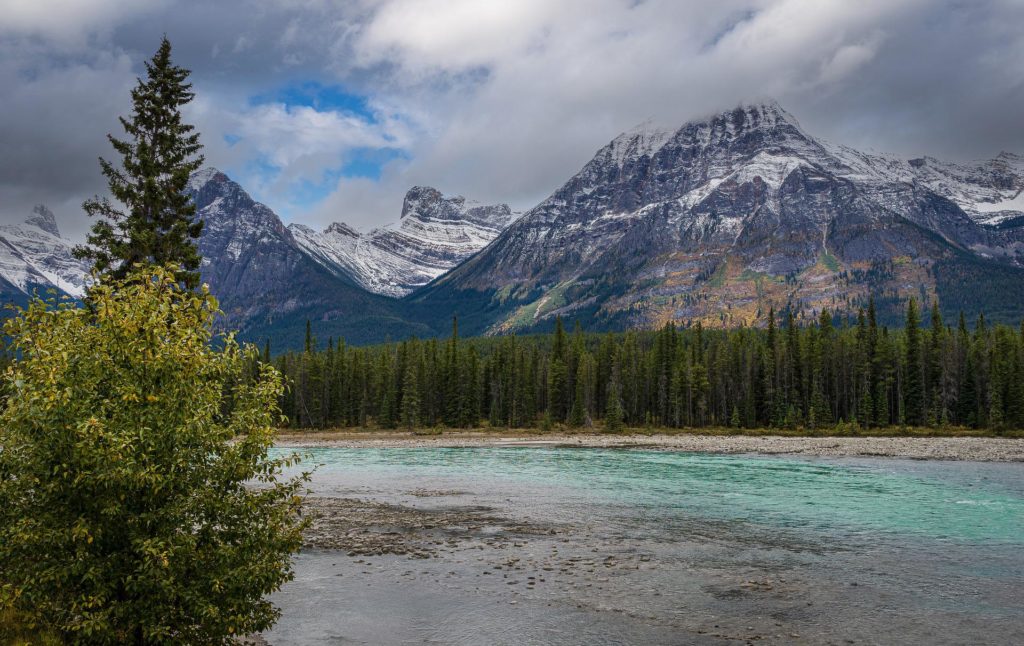 In 1984, when the Canadian Rocky Mountain Parks became a World Heritage Site, its outstanding universal value focused on its physical and natural features only. This mountain landscape of seven contiguous parks was inscribed for two reasons. First, the World Heritage Committee judged it an exceptional illustration of glacial geological processes, including mountain peaks, ice fields, remnant glaciers, canyons, waterfalls and limestone caves. The site includes the Burgess Shale fossil site where remains of soft-bodied marine animals from about 540 million years ago provide key evidence of the early evolution of most animal groups known today. Secondly, it is a site of exceptional natural beauty.

More than thirty years later in 2018, when Pimachiowin Aki received World Heritage status, its outstanding universal value focused on an interwoven pattern of cultural and natural aspects, both tangible and intangible. Straddling the Manitoba/Ontario border, this site is a landscape of free-flowing rivers, lakes, wetlands, and boreal forest. It forms part of the ancestral home of the Anishinaabeg, an Indigenous people living from fishing, hunting and gathering. The site encompasses the traditional lands of four Anishinaabeg communities: Bloodvein River, Little Grand Rapids, Pauingassi and Poplar River.

Beyond its physical characteristics, the site embodies the cultural value of nature. Judged positively for its biological and ecological processes as the most complete and largest example of the North American boreal shield, the site is also an exceptional example of the cultural tradition and belief system of Ji-ganawendamang Gidakiiminaan (keeping the land), which involve honouring the Creator’s gifts, respecting all forms of life, and maintaining harmonious relations with others. The current population and their Indigenous ancestors have used this complex network of sources of sustenance, habitation sites, travel routes and sacred ceremonial sites for over 7,000 years. 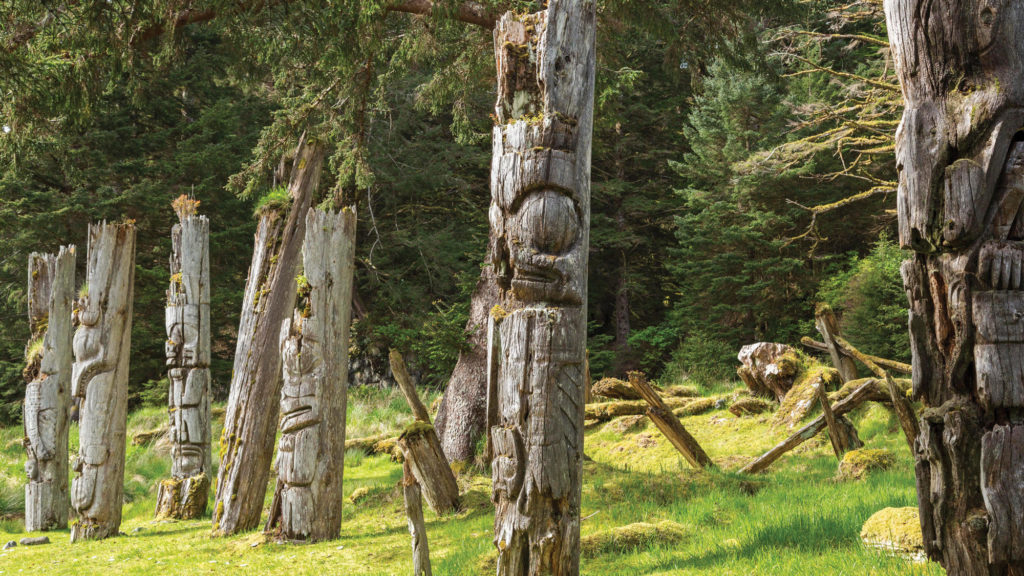 This island with its house remains together with carved mortuary and memorial poles was inscribed in 1981 as a testament to the Haida people’s powerful artistry and culture. The decaying cedar poles highlight a debate between modern scientific methods and traditional approaches to conservation. While it is possible to stabilize decaying wood using modern chemical processes, the Haida have adopted a traditional approach that includes stabilization of some poles and non-invasive plant removal, in an effort to prolong the period before they return naturally to the earth. In addition, the Haida Gwaii Watchmen Program, now run by the Council of the Haida Nation, guides visitors and ensures Haida stewardship and continuity of culture on the land and ocean.

In response to the evolving notion of large landscapes and a holistic approach to the connections between culture and nature, SGang Gwaay is today viewed as part of a broader narrative. Canada now proposes an enlarged nomination of the vast lands of Gwaii Haanas that would include the small island with its house vestiges and carved mortuary and memorial poles. The new proposal includes Gwaii Haanas National Park Reserve, National Marine Conservation Area Reserve, and Haida Heritage Site.  This proposed site features other village remains and many archaeological features as well as a thriving complex ecosystem of rainforests, mountains, lakes and seas, along with diverse species, all reflecting the living culture of the Haida people.

Among Canadian sites affected by this trend is the Historic District of Old Quebec, a World Heritage Site that attracted about 5 million visitors per year before Covid-19 struck. To its credit, the municipality has proactively taken steps to manage tourism by consulting community stakeholders and creating an action plan that aims to increase the number of permanent residents in the sector by 500 through improvement to housing, shopping and other services. In addition, the city has re-routed tour buses outside the historic district, enhanced street furniture and improved visitor services, although sometime the surge of visitors when cruise ships arrive is hard to overcome. 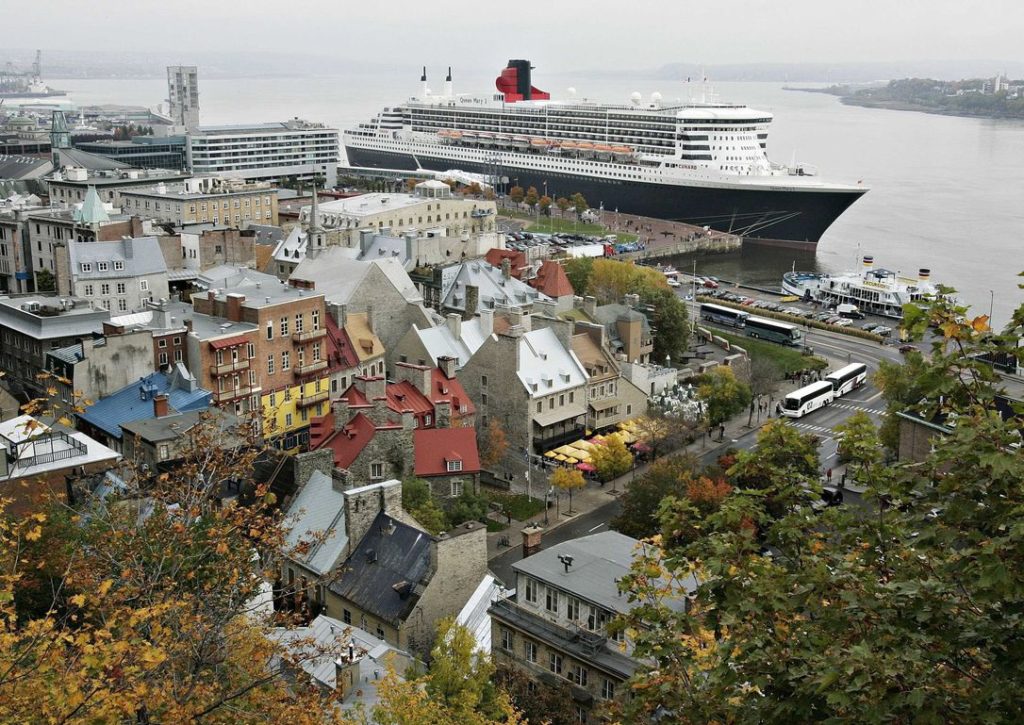 Another challenge is the climate emergency. Climate change has become one of the most significant threats to World Heritage properties. Violent weather, rising water levels and the migration of species, among other effects, undermine the potential contribution of sites to local economic and social development. Some properties are shrinking in size and will eventually disappear under the sea. The World Heritage Committee has outdated policies (2007) for identifying and mitigating risks from climate change but is struggling to produce new ones in line with the 2015 Paris Accord and the UN Sustainable Development Goals.

Canadian World Heritage Sites are not immune from the effects of climate change. A striking example is Yukon Ice Patches, now registered with UNESCO as part of Canada’s Tentative List. First discovered in 1997 in the traditional territory of Carcross/Tagish First Nation, the site continues to reveal rare fragile, organic tools dropped by Indigenous hunters as they chased woodland caribou beginning 7500 years ago. Perishable elements such as wood, sinew and feathers allow new insights into material culture and technological change through time and provide new understandings of the accomplishments of northern Indigenous Peoples. Yukon Ice Patches experiences a delicate balance of winter snow accumulation and summer melt. Despite global warming, these sites still receive winter snow that creates patches occupied by caribou and sheep throughout the summer months. In the event of serious or permanent loss of persistent ice accumulations, the proponents argue that these locations, and the associated artifact collection, will continue to epitomise an outstanding example of an ancient hunting tradition supported by oral histories. 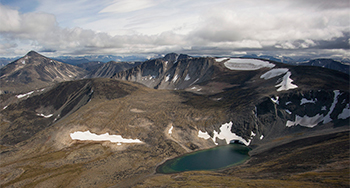 Initially created as a treaty among nation states, the World Heritage Convention now reaches beyond governments to engage others in the protection and conservation of so many sites. With limited influence on the decision-making role of the World Heritage Committee, outside groups are coalescing to have their say.

A new independent organization called OurWorldHeritage (OWH) emerged during the lockdowns of Covid-19. Its goal is to strengthen civil society participation in protecting World Heritage by creating open discussion platforms that stimulate dialogue and co-learning among grassroots organizations, civil society, academics and stakeholders. In its first year, OWH organized #2021debate, presenting 134 webinars organized by over 600 speakers from all regions of the planet. Access to the webinars is available on the website. In November 2022, OWH will host a global forum in Florence to celebrate the 50th anniversary of the World Heritage Convention.

Looking forward to the next 50 years, we can expect persistent challenges from known threats like conflicts, disasters, overtourism and the climate emergency, as well as new threats not yet known. In recognition that heritage places are ultimately conserved at the local level, we can anticipate an increase in volunteers, citizens, ad hoc groups and civil society organizations stepping up to face the challenges of protecting the world’s treasures of natural and cultural places. 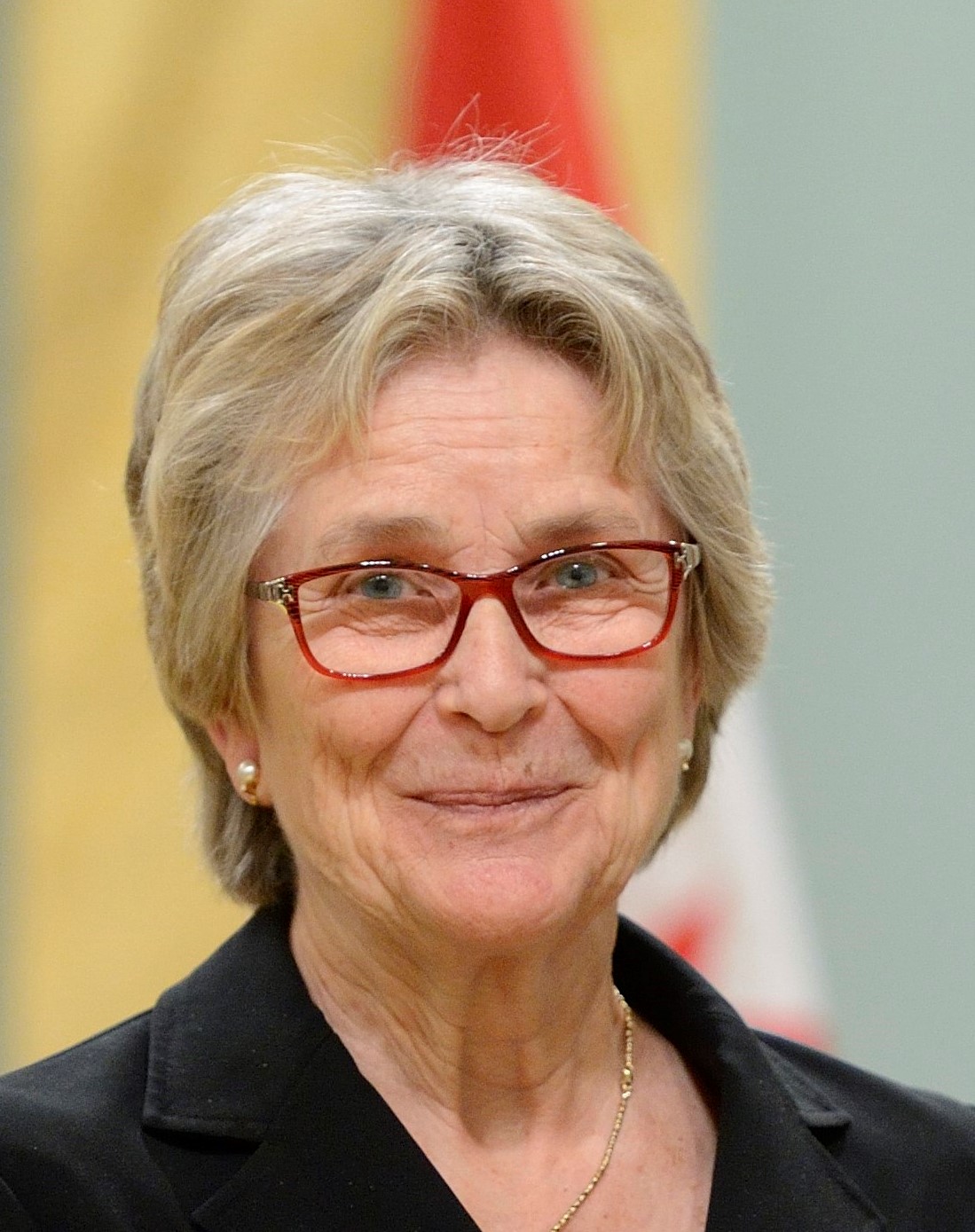 A professor at the University of Montreal from 2005 to 2019, Christina Cameron directed a research program on heritage conservation. She previously served with Parks Canada for more than thirty-five years, chairing the World Heritage Committee in 1990 and 2008.