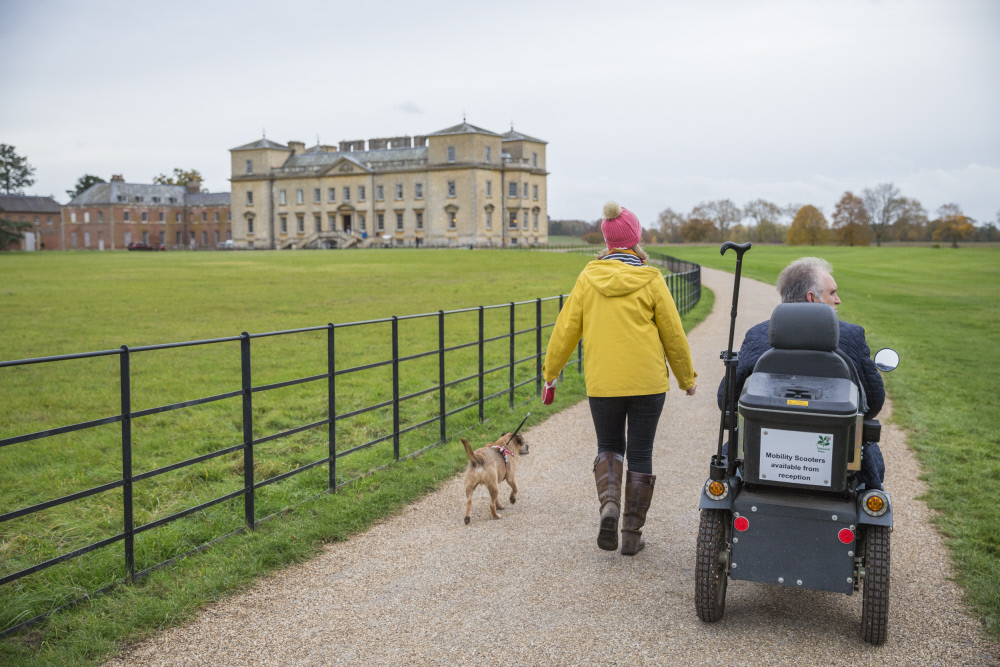 The Diversity Decade: How Heritage Is Spanning Differences in 2020

In January of 2020, without fanfare, the National Trust for England, Wales and Northern Ireland made a subtle change to its motto. It wasn’t much – the switch of a few words – simply turning the familiar slogan “forever, for everyone” on its head. Now, it reads “for everyone, forever.”

This seemingly negligible change, likely unnoticed by many, reflects a massive undertaking on behalf of Europe’s largest conservation charity to reposition itself for a new decade. The Trust’s tagline adjustment sends a message that people come first – not just some people, but everyone.

In many ways, says Liz Girling, Assistant Director of Inclusion at the Trust, it’s not a new story – in fact, helping people was the organization’s original mandate. The organization was founded 125 years ago to bring wellness to the citizens of the United Kingdom by creating places for them to experience nature. However, when dozens of manor-houses were left without heirs after the two World Wars and subsequently fell into the hands of the Trust, the original mandate of the organization evolved to focus on the physical conservation and maintenance of properties.

As audiences seek more inclusive stories, wider representation, and accessibility for all, the UK’s National Trust is revisiting the mission of public welfare set by its founders. That mission is evolving with a broadened perspective on gender, age, sexual orientation, ability, ethnicity and class. The plan is tripartite: to tell more diverse stories, widen the audience demographics, and create a more accurate reflection of society in the makeup of the organizations’ staff members themselves.

“In ten years’ time,” says Girling, “I want our commitment to diversity to be hardwired into the organization’s DNA.” 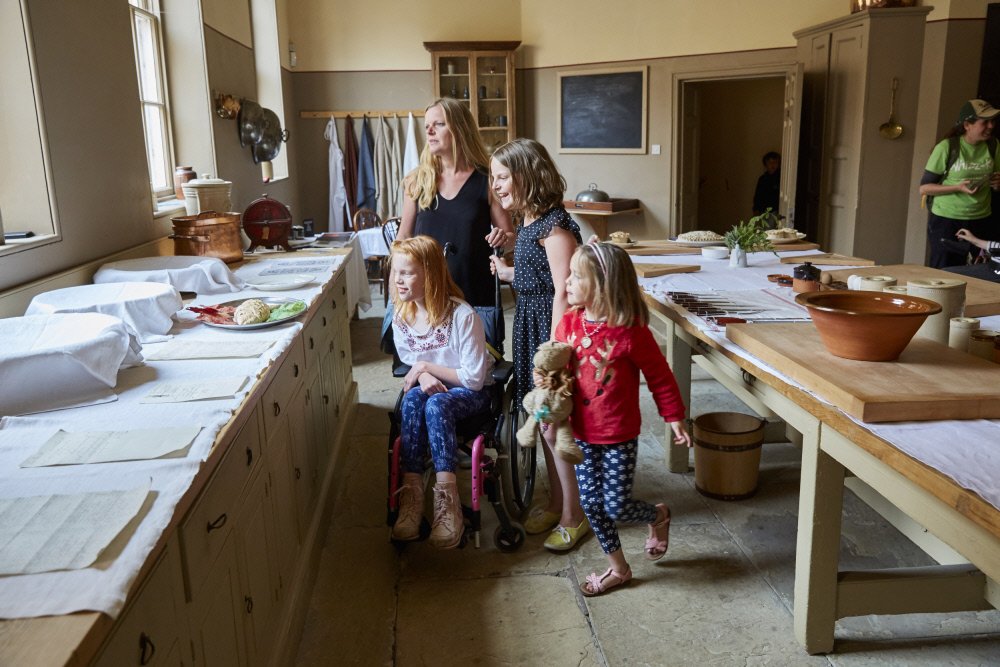 Historic sites are expanding their exhibits to include the stories of diverse groups. Photo credit: National Trust for England, Wales and Northern Ireland. The kitchen of Attingham Park, Shropshire.

One of the ways to make diversity a priority is to broaden the scope of the stories told at historic sites.

Few are as familiar with the potential for diverse stories as Catherine Leonard, Secretary-General of the International National Trusts Organization (INTO), which groups together nearly 80 Trusts around the world.

Leonard began her career twenty years ago as an employee of the National Trust for England, Wales and Northern Ireland. “Back then, we were just starting to talk about opening up kitchens of National Trust houses. That was where we were: telling the stories of the workers instead of just the rich people,” says Leonard. “People were rather surprised ­– this was, in some ways, the antithesis of the country house estate that the National Trust is famous for looking after.”

Now, in her role at INTO, Leonard says that she’s noticed a shift in the industry. Today, exhibitions about the working class are not only familiar – they are celebrated and complex. The kitchens of great houses, with all their equipment and manual implements, are now often considered among the most interesting features of a historic property. At the House of Dun in Angus, Scotland, for example, the National Trust for Scotland is preparing a new perspective on the history of class, using agricultural and domestic artifacts from ordinary people and life in eastern Scotland.

“We’ll be shifting this [kitchen collection] to a site where we’ve traditionally had a focus on the aristocratic life in the area,” says David Hopes, Head of Collections and Interiors at the National Trust for Scotland. “It’s a form of social inclusion we haven’t really tried before.”

Nearly 150 miles away at Brodick Castle, the Scottish Trust is telling the stories of another typically under-represented group: women. Until the twentieth century, women were not given many opportunities to actively participate in the world in a way that would greatly affect society, and therefore become the stuff of stories. The activities of women’s lives, being more concerned with the daily life of the home, were not considered historically worthy, with the unsurprising result of fewer notable stories about them being told.

To redress this gap, the building’s staff set about researching the castle’s former female occupants, about whom they discovered fascinating and previously untold stories that are now being shared with the public. As a result, says Hopes, there’s a greater gender balance in the way the site is presented. “Arguably, it’s often very difficult to be as diverse as you could be, but we’re shifting away from the dominant male, white, middle-class view, and towards something that is more fractal. And, frankly, more interesting.”

A newer frontier beyond the focus on diverse classes and genders is the celebration of diverse sexualities. In 2017, the National Trust for England, Wales and Northern Ireland launched the celebratory multi-site program Prejudice and Pride, the year being the 50th anniversary of the partial decriminalization of homosexuality in England and Wales. The program, which celebrated the monumental revision to legislation passed by Parliament in 1967, included special installations at historic sites, a thematic issue of the National Trust’s magazine, and a podcast series exploring stories related to LGBTQ histories in England. 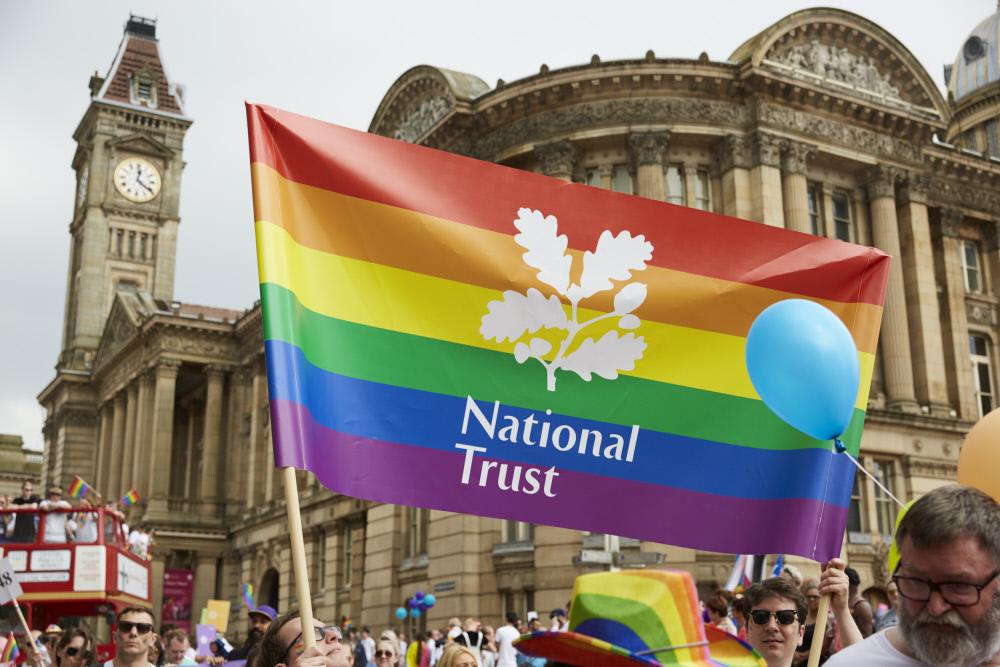 The Prejudice and Pride initiative uncovered same-sex relationships half-hidden in National Trust places such as Kingston Lacy in Dorset. The country manor was once home to William John Bankes, who left England in voluntary exile in 1841 to avoid prosecution for same-sex acts. An installation at the site of 51 knotted ropes hanging from the ceiling commemorated the men who were hanged for same-sex relationships during Bankes’ lifetime.

Prejudice and Pride received a strong response from the public.  “We estimate that about 350,000 people visited LGBTQ exhibits,” says Girling. “All our members received the magazine, and the podcast has been downloaded 15,000 times – a huge amount of activity.”

The organization did also see some backlash regarding LGBTQ exhibits from some members who Girling says may have felt that this wasn’t the Trust they knew. She admits that the Trust had several years of “really quite tricky” situations with the national media, because some Trust members were disappointed with what they were doing.

While the criticism was bruising, Girling says, it was the push they needed to launch into a major organizational overhaul, starting with research and organizational assessment. “We’re estimating it will take between three and five years to get confidence in areas that we’ve struggled to talk about in the past,” she says.

For the National Trust of South Australia, diverse programming has led to the deepening of relationships between communities. In 2018, the organization hosted the Titjikala Choir, a renowned Aboriginal singing group, at Ayers House, the Trust’s Victorian headquarters. The performance was paired with an exhibition of aboriginal batik fabric designs that highlighted the unique artistry of Central Australia.

“We pulled down the curtains and hung the silk-screen art around the house instead – really tried to change up the space and disrupt the Victorian interpretation of a historic house,” says Jill MacKenzie, Director of Experiences and Engagement. “The use of our place has usually been European-focused, so this was a great way to tell an important story about Central Australian Indigenous communities.”

The event sold out completely. Now, instead of one-off events, Mackenzie says the National Trust of South Australia is planning to develop ongoing relationships and sustainable programming models with local Aboriginal communities in order to tell a more diverse history of Australia. “That’s our challenge for the next few years.” 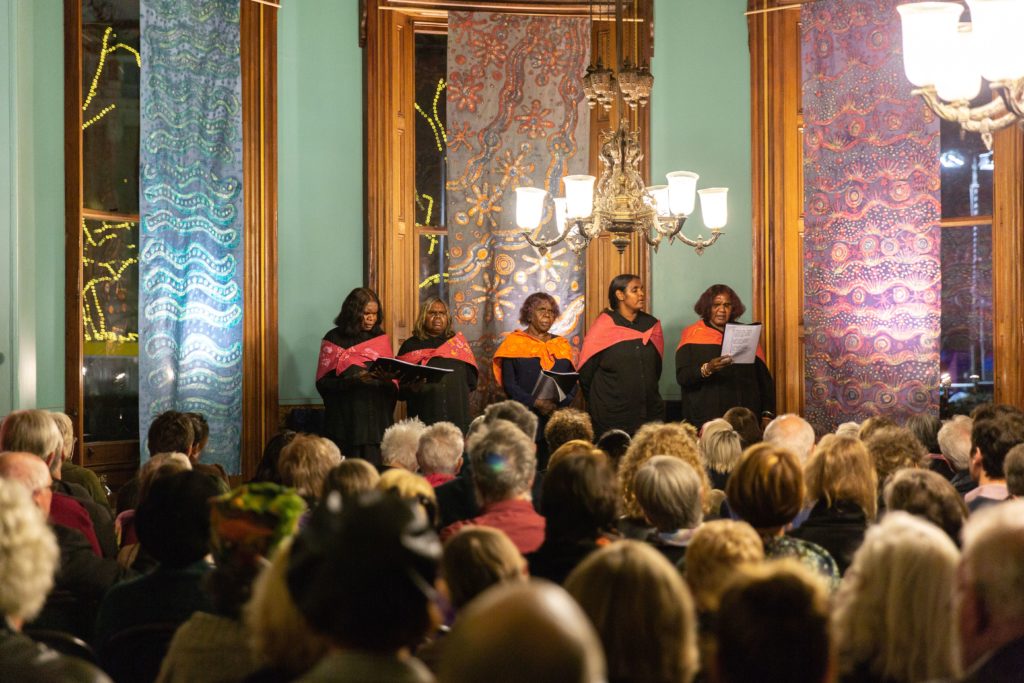 The National Trust of South Australia welcomed the Titjikala Choir to perform at their headquarters, as part of a new initiative to include Indigenous voices. Photo credit: Sia Duff

While diverse programming is important, some suggest a more direct approach to increasing broader appeal for the heritage world. According to Justin Scully, General Manager of Fountains Abbey & Brimham Rocks of England’s National Trust, the best avenues to diversity lie in the logistics: widening audience demographics by looking at who is being left out.

“What are the practical obstacles for increasing diversity? Things like price, access through public transport, and access for people with disability will keep people away from sites,” says Scully. “I’m looking at sorting the obvious barriers, rather than the programming.”

To assist those with disabilities, the National Trust provides an Access Guide, which gives helpful information about the accessibility of their places, and discounted or free access to Essential Caregivers. Also available is the Links Pass, which gives half-price entry to groups affiliated with disability charities, day centres or registered care homes.

As for the lack of public transport to Fountains Abbey, says Scully, the National Trust contributes several thousand pounds per year towards subsiding the local bus service. And in an attempt to reduce the barriers for young people and families, the organization now offers child and youth passes at a lower cost.

“We know that childhood experiences of coming to these places is a huge driver in adulthood for people to choose to support the work we do,” says Tom Freshwater, Head of Public Programmes, National Trust for England, Wales and Northern Ireland, who has noticed a big upturn in family audiences recently. 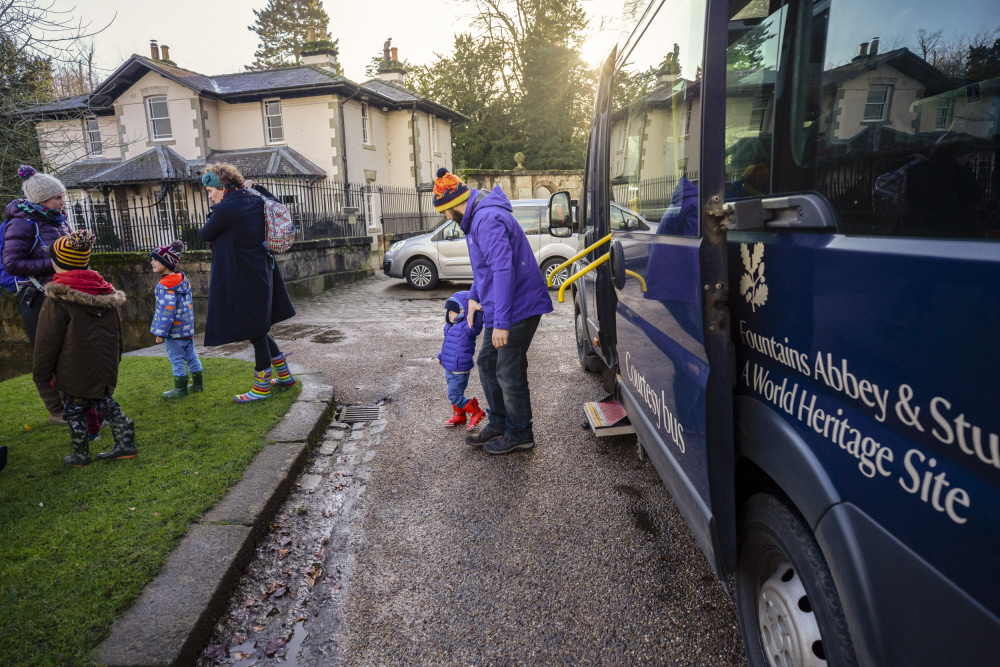 And, increasingly, heritage professionals are taking cues from abroad. In Italy, the Fondo Ambiente Italiano (FAI) is now championing a program that gives heritage meaning to recent immigrants. The program, Ponte tra culture, or “a bridge between cultures to culture,” offers free art history classes to newcomers and crowd-sources the translation of information at museums and historic sites into local languages. Their goal is to bridge the diversity of Italian society through the appreciation of the country’s art and history.

At home in Canada, historic sites and museums are embracing diverse Indigenous histories, from the 6,000-year-old Plains Buffalo culture at Head Smashed In Buffalo Jump in Fort MacLeod, Alberta, to Robert McDonald’s 18th-century Indigenous language translation “syllabarium” at the Old Log Church Museum in Whitehorse, Yukon. On the other side of the country, the Fredericton Regional Museum is breaking ground with their Indigenous “Wabanaki Way” exhibit, the first in the museum’s history to be curated entirely by an Indigenous person – Ramona Nicholas, Elder-in-residence at the University of New Brunswick.

According to Melynda Jarratt, the museum’s Executive Director, this has given the local Wabanaki people agency over the way their stories have been told in a manner that previous exhibits didn’t, and has helped the museum staff engage with Indigenous people in new ways.

“Before the exhibit, the Wabanaki people obviously didn’t feel like the museum was for them,” says Jarratt. “Now, on any given day, there are several people of Wabanaki origin working with us on this and other projects, and spreading knowledge to the wider community.”

While telling diverse stories to engage wider audiences will help heritage organizations be more relevant, an additional step toward diversity, according to Hopes at the National Trust for Scotland, is to look within.  The stories themselves should be told by a more diverse group of people. Statistically, he says, the Scottish Trust staff doesn’t mirror the nation’s society as closely as it could. They’re in the process of fixing that, he says.

Liz Girling at the National Trust for England agrees that fundamental changes are needed.  “We will only do that if we address our enclosed culture and take practical steps to become more diverse,” says Girling.

“We’re at the start of an enormous, organization-wide commitment to change. We have very deep-rooted ways of thinking and working – strategies and policies, all of which are underpinned by a commercial return on investment. We need to balance that out by thinking about the return on people.”