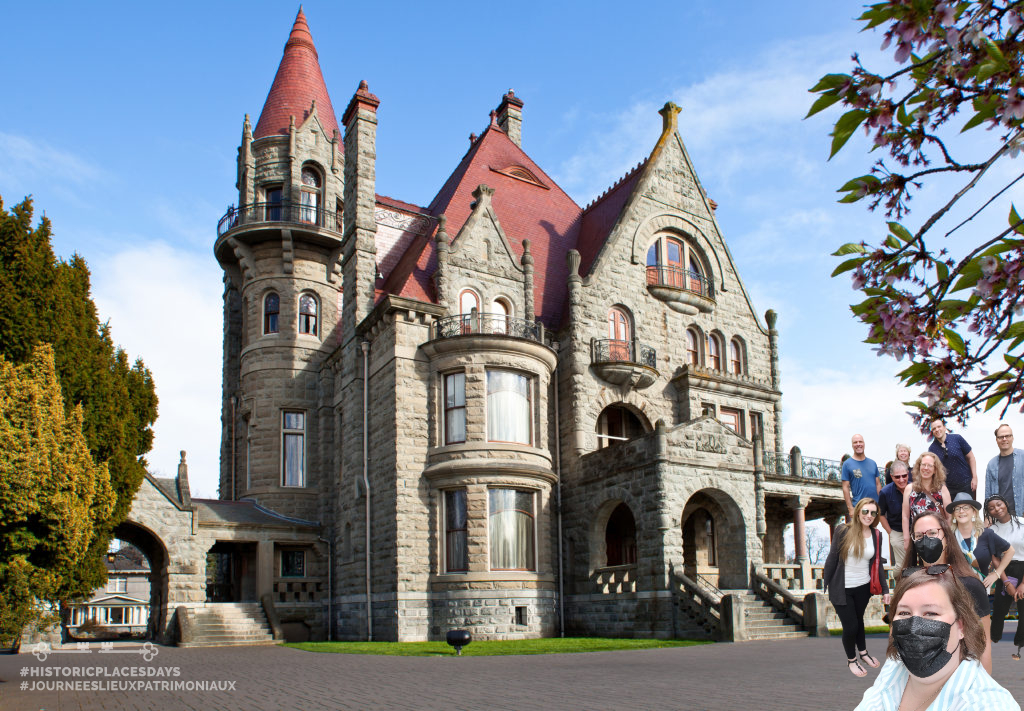 Selfies from the National Trust for Canada 2022

It’s that time of year again! The annual Historic Places Days event means that folx are out taking photos, and digital selfies at historic places coast-to-coast-to-coast. The staff at the National Trust for Canada are no exception, take a look at the historic places they visited both digitally and in-person! 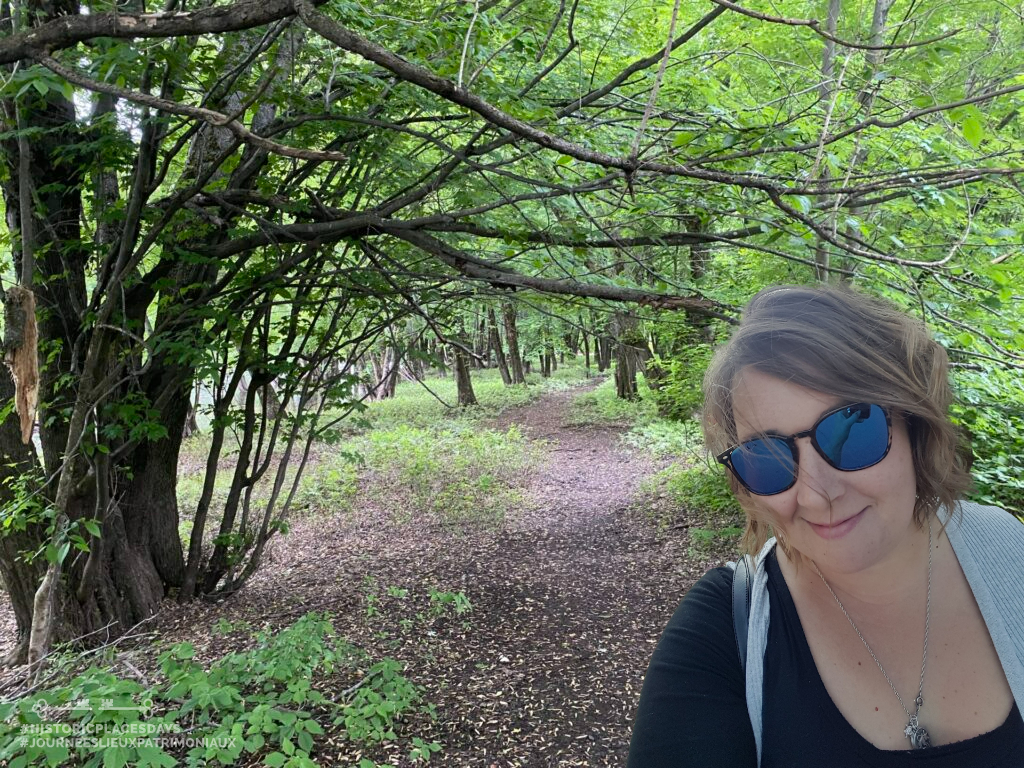 Kiersten’s digital selfie at the site of the 1796 escape of Nancy Morton, a woman enslaved by a loyalist in New Brunswick.

This year the National Trust is partnering with the City of Fredericton on a new geocaching initiative to tell invisible stories of Black communities in the Maritimes. Until she can visit in person, Kiersten has taken a digital selfie at the site of the 1796 escape of Nancy Morton, a woman enslaved by a Loyalist in New Brunswick. Though she was caught shortly thereafter, Nancy went on to challenge her enslavement in the Superior Court, defended by notable lawyers Ward Chipman and Samuel Denny Street. She lost her case, but the impact of the trial changed public understanding of the slave trade in New Brunswick. Place-based history is often limited by the physical remnants of communities and settlements, most of which are conserved because of their role in telling a dominant, colonial narrative. We want to look beyond the established interpretations, to find new ways to tell stories of places that matter, and geocaching is one way of marking important locations where stories can be shared. 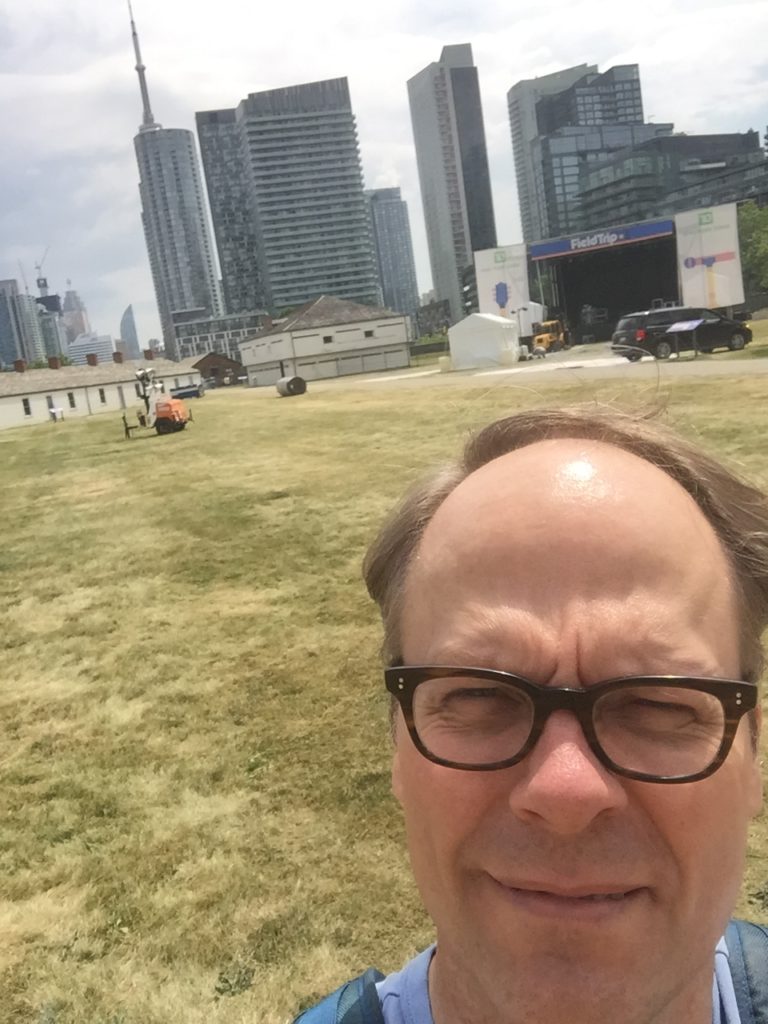 “Enjoyed a hot first visit to Fort York in downtown Toronto – a site oozing in history! They were busy setting up for a weekend musical festival.” – Chris Wiebe

While preparing for the National Trust’s conference in Toronto this October, Chris paid a visit to Fort York National Historic Site of Canada!  Fort York is a military site preserved on a 43-acre park where visitors can learn about the Battle of York.

Emily visited multiple sites that are participating in Historic Places Days 2022 and took some fabulous photos too! Here’s what Emily had to say about her visits: 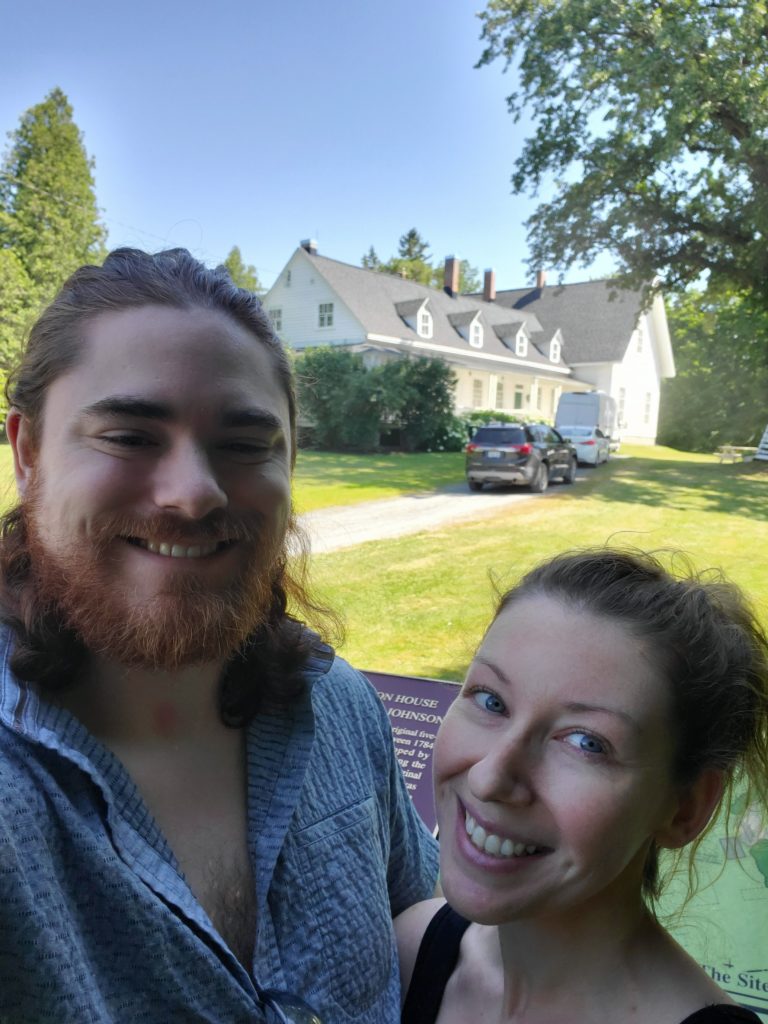 “We visited this site on the same day as a wedding! Luckily, we got there before the festivities started, just enough time to visit the grounds and learn a bit about this a beautiful venue – one of the oldest surviving buildings in Ontario (built in the late 18th century).” –  Emily Boulet

Sir John Johnson House gained its historical significance as one of the oldest surviving buildings in Ontario, its architectural design and its association with Sir John Johnson.

“The canal is a beautiful site nestled in the town of Sainte-Anne-de-Bellevue. We saw a variety of boats waiting to be let through the locks. With the canal on our left, and beautiful gardens and attractions on our right, this was a picturesque place for a day trip that also boasted amazing views of the St. Laurence River” – Emily Boulet

Once functioning as the main entry way between Kingston and Montréal, the Sainte-Anne-de-Bellevue Canal is now enjoyed by visitors looking to reflect on the 150 years of history it has to offer and watch the stunning views. 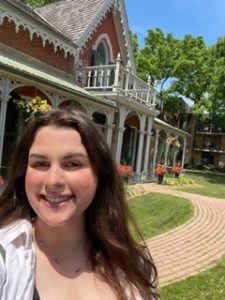 Katie paid a visit to Hillary House National Historic Site in anticipation for their exclusive Historic Places Days video, Hillary House Walkthrough Tour.  Hillary House is in the heart of Aurora, Ontario and is an excellent example of the Gothic Revival Style and is also home to the Koffler Museum of Medicine.

Miranda gets creative with digital selfies! 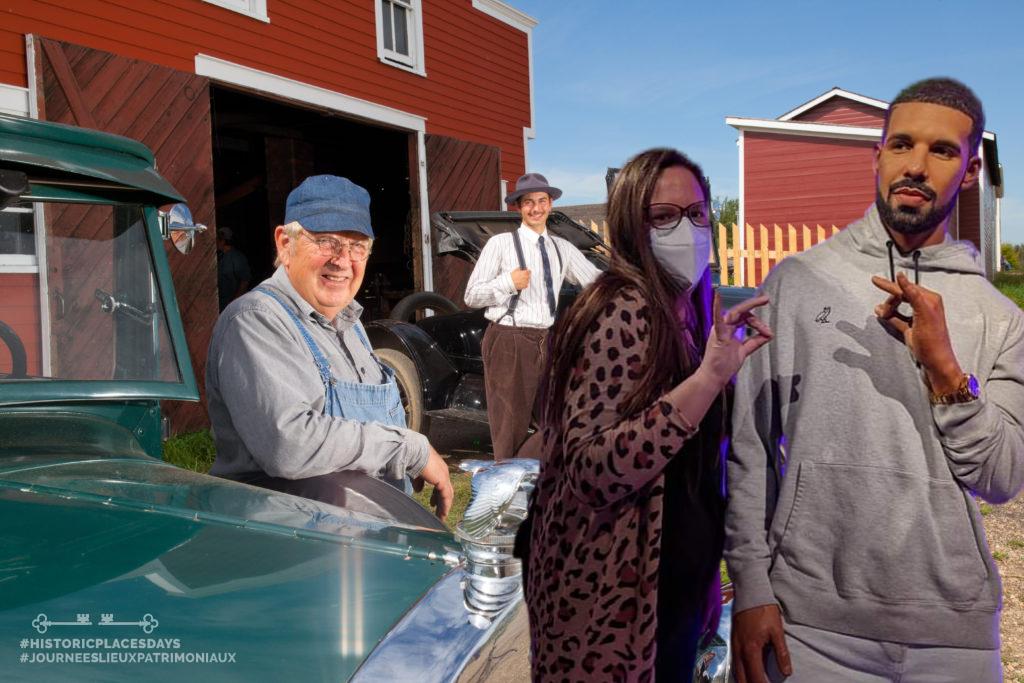 A digital selfie of the National Trust for Canada staff at Craigdorroch Castle in Victoria, BC.

Earlier this summer, most of the staff at the National Trust were able to get together for an in-person staff day-out in Ottawa, which is the perfect time to take a group selfie! The digital selfie was taken at Craigdorroch Castle in Victoria, BC, which is a stunning building with Victorian era furnishings and tiled roofing reminiscent of Scottish highland castles.

Get to know some of the cutest staff members at the Trust: 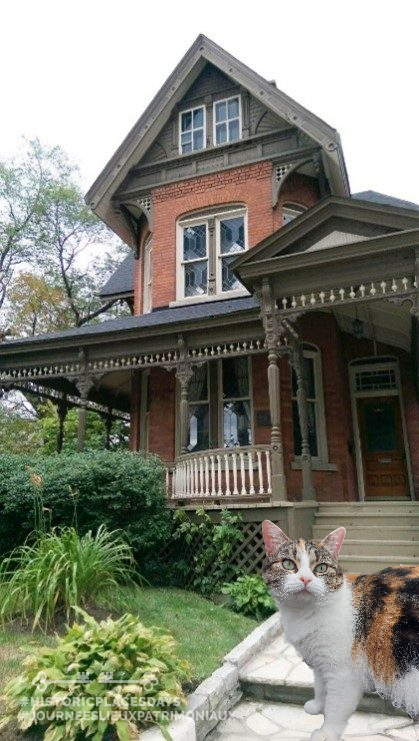 Digital selfie of Cleo, the cat, in front of the National Trust for Canada headquarters in Ottawa, Ontario.

Cleopatra has been working hard from home as a consultant but wishes that she could be working out of the beautiful National Trust headquarters in downtown Ottawa. A superb example of decorative Queen Anne Revival architecture, the house known now as Andrex House was built in 1889 for Robert J. Davidson of Davidson Lumber Co. as a wedding gift for his wife. He hired his best craftsmen to install ornate oak walls, doors and ceilings. We know that there are two friendly dogs who work from Andrex House daily, so Cleopatra took a digital selfie from a safe distance. 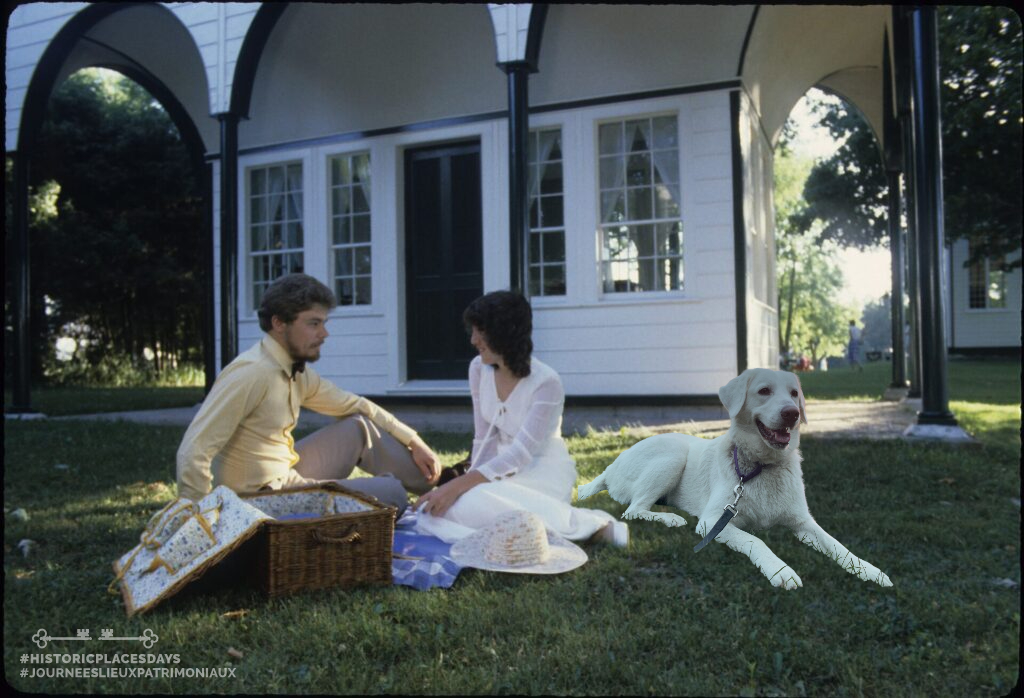 Katie’s dog, Bentley is enjoying a lovely picnic at Sharon Temple, National Historic Site and Museum. Visitors can grace the grounds of this stunning open-air museum that features 10 heritage museums and the story of Children of Peace, which was formed during the War of 1812.

Historic Places Days is goes on for the rest of the month and the staff are loving seeing all the photos, digital selfies and events people have shared so far. The National Trust team hopes that their photos inspire you to show your support and appreciation for historic places across the country and  take some of your own photos. There is still time to enter your masterpieces in the Photo Contest, so don’t miss your chance to win incredible prizes like a Parks Pass, VIA Rail Pass or $1000.