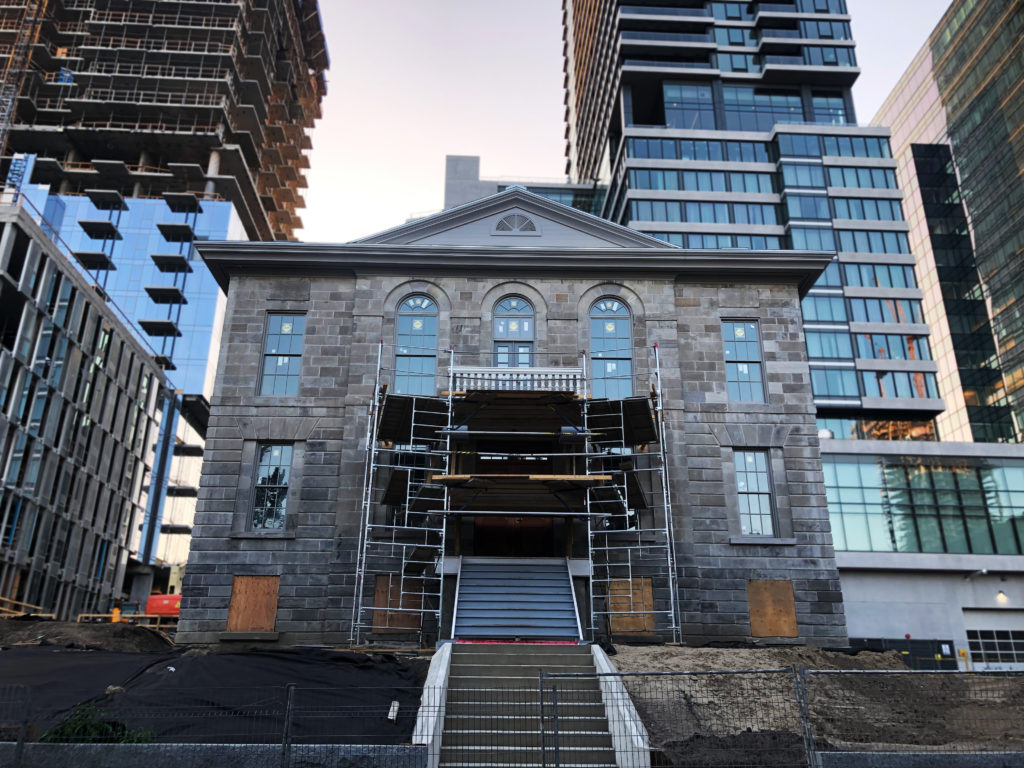 Until a few months ago, it would have been easy to mistake the gunshot marks for recent damage. Hidden between graffiti and boarded-up windows, the 170-year-old bullet holes looked right at home on the the disintegrating façade of the Maison Louis-Hippolyte LaFontaine. 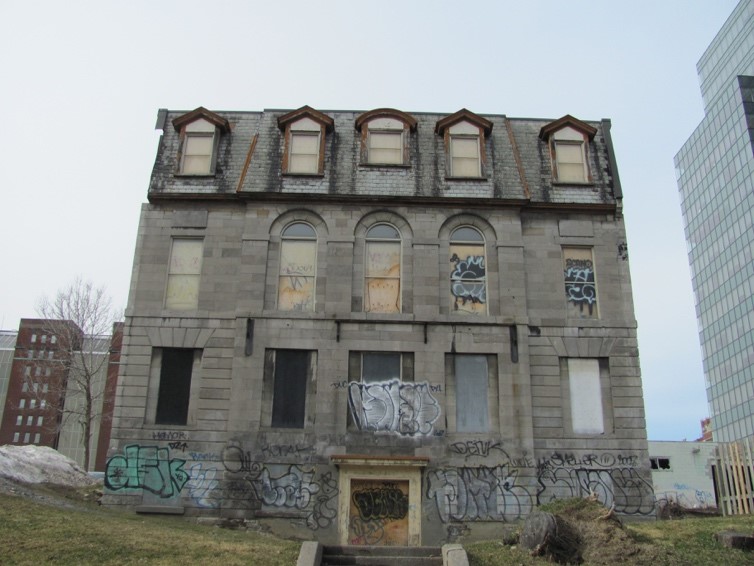 The Maison LaFontaine in 2010. At this point, the building had been vacant for more than 20 years. Photo credit: Héritage Montréal.

For over 30 years, the Montreal building that witnessed crucial moments in Canada’s history sat abandoned, inhabited only by squatters and overlooked by a parking lot. Finally, after a saga spanning decades, the building at 1395 Overdale has been restored. 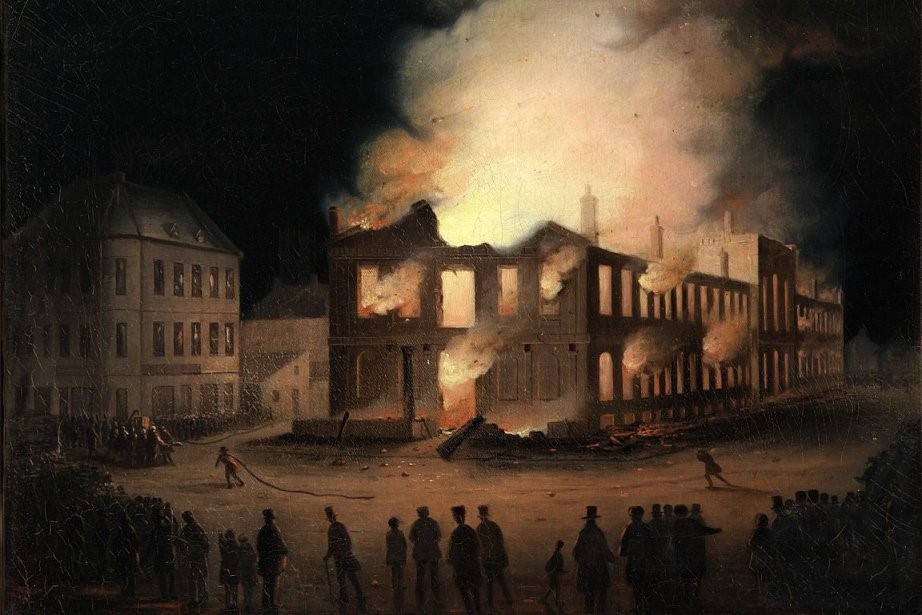 Recently purchased by a real-estate firm, the building, now reverted to its original 1846 neoclassical appearance, awaits new residents – though it will be hard to top its first inhabitant. The home was built for Louis-Hippolyte LaFontaine, the first Canadian to become Premier of the United Province of Canada and the first head of a responsible government in Canada. In 1849, the structure found itself in the middle of the political upheaval, as rioting English Canadians took to it with guns after setting the Montreal Parliament Buildings aflame.

According to John Ralston Saul, author of Louis-Hippolyte LaFontaine & Robert Baldwin, the building witnessed a great extent of the planning of Canada’s democracy. “Of all the buildings that are central to Canada becoming a democracy,” he the told National Post in 2015, “it’s the only important one left.”

Located in the core of Canada’s one-time-capital in the neighborhood of l’Îlôt Overdale, the Maison LaFontaine is also the sole surviving member of what was once a number of historic Victorian residences constructed during the mid-1800s. Heritage professionals still remember the neighborhood’s destruction.

“It was completely demolished,” said Marc Pagliarulo-Beauchemin, Communications and Media Strategy Coordinator for Héritage Montréal. “Only the Maison LaFontaine was left intact, but it was left abandoned.”

The building, though protected, sat vacant for over three decades, its interior supported by a metal frame and its exterior accruing vandalism. It made the National Trust for Canada’s list of endangered places in 2006/2007, and Héritage Montréal’s list in both 2006 and 2010.

Though several projects were proposed for the site, it was not until 2011 that YUL Condominiums, led by real estate developer Brivia Group, purchased the site. Brivia was later joined by Tianco Group as co-developer to the YUL project, which includes the restoration and repair of the house as an agreement between YUL and the City of Montreal. 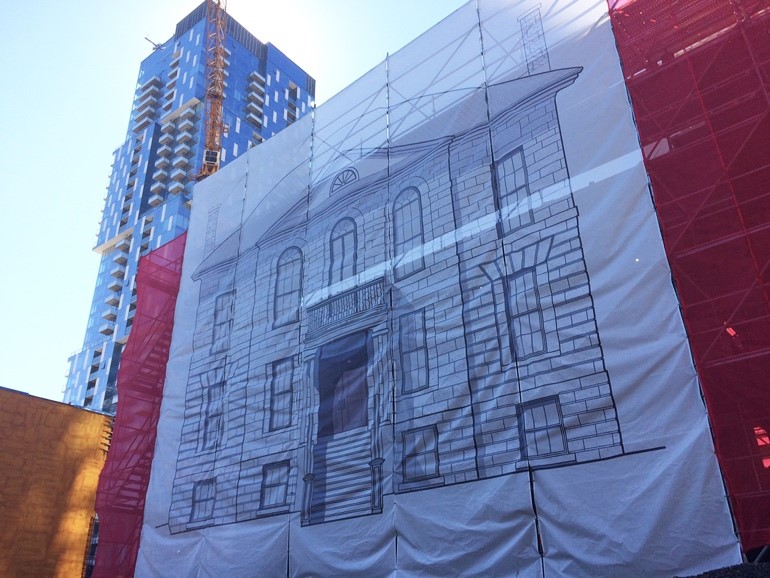 “The Maison LaFontaine was the starting point for the whole development project,” said Anik Shooner, the architect leading the conservation effort. “I believe that it gives the neighborhood a quality that is very human and ‘Montréalaise.’ It gives us the feeling of belonging to something bigger.”

Shooner, along with other heritage experts, made the decision to revert the building to its original state from the 1800’s. In addition to removing the false mansard roof added during the early 1900’s, this meant painstakingly numbering and disassembling the façade in order to retain its authenticity.

“It was extremely important to conserve the stone wall of the main facade, still pierced with bullet holes from when rioters tried to assassinate Louis-Hippolyte LaFontaine,” said Shooner. “It wasn’t easy, because there is little documentary evidence or original photographs.” 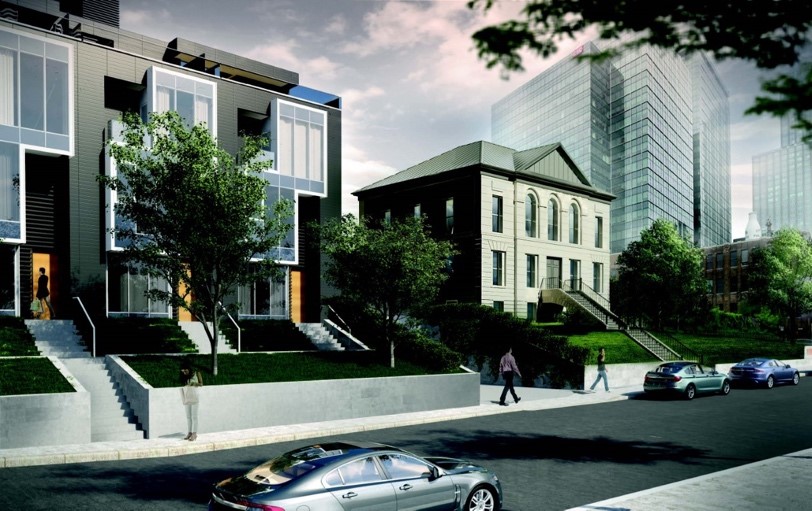 The team carried out extensive research to ensure the building matched historical standards. However, they wanted the 1840s look to carry on further than the single heritage building. Shooner says that grey tiles on the newly-constructed townhouses next door will reflect the Maison’s masonry. And, as a bonus, the old house will get some breathing room.

“Fortunately, the developer let us leave some empty space around the building, so it won’t be squeezed between the new structures,” said Shooner. “In that space, we’re going to recreate an orchard to recall the property’s original state.”

Now almost fully restored, the site awaits its next residents. It has been proposed as a potential historical education centre, though use as office space or residential property has also been suggested. As for those involved with the building’s new lease on life, there’s no time to slow down – this is only the beginning.

“We have to collectively ensure that this building will be inhabited by some kind of project, so that the process doesn’t start again,” said Pagliarulo-Beauchemin. “The first step was a success – now what remains is to find a vocation worthy of the building’s historical significance.”