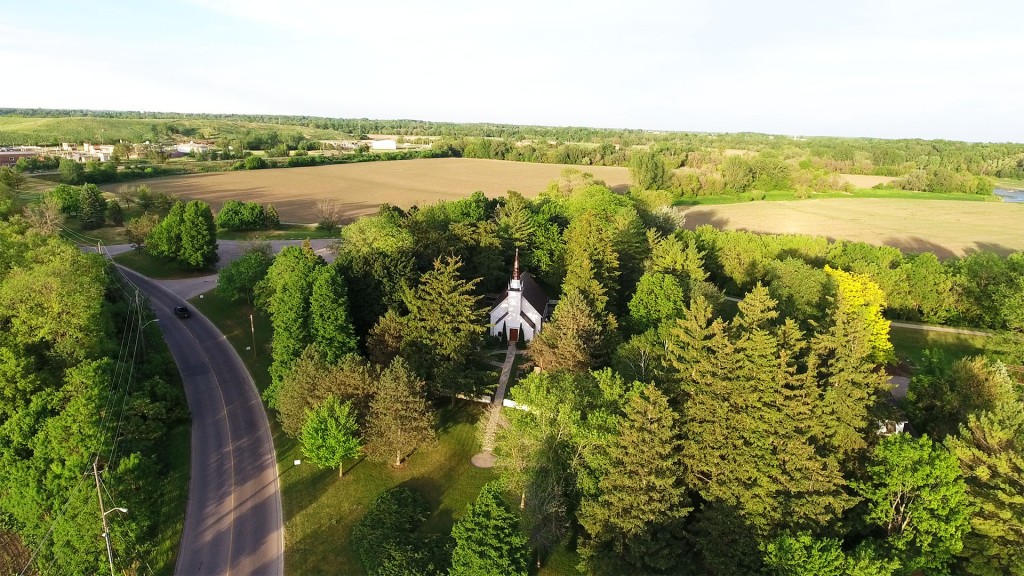 A Historic Jewel in the Woods

Her Majesty’s Royal Chapel of the Mohawks is a charming chapel in Brantford, Ontario. Managed by Six Nations Tourism, the site promotes itself as “A Place Where Royalty and Nations Unify”. While it still functions as a Protestant church for the communities of Six Nations and Brantford, it is also a well-beloved museum managed by the local Mohawk Nation that shares the history of the Haudenosaunee people.

Built in 1785, the chapel once faced the Grand River, where the congregation would park their canoes on a small island and follow a short trail to the chapel for their Sunday services. Once the Mohawk Village grew larger with both Indigenous and non-Indigenous settlers, the chapel was rotated 180 degrees in place to face the recently built roads in the village.

“I have had the pleasure of working at Mohawk Chapel for the last two and a half years now, and every day is a different experience here,” says Roxanna Nazarowicz, the Cultural Experience Coordinator at Her Majesty’s Royal Chapel of the Mohawks. “Our visitors come from all over the world and as much as I am able to teach them the history of this historic site, they also can teach me about their connection to this incredible 235 year old building.”

The graveyard, with the tomb of Joseph Brant and his son, is worth a visit. Brant, the military and political leader of the Mohawk Nation, led his people in 1784 to settle along the banks of the Grand River in Mohawk Village, now Brantford, after they sided with the British during the American Revolution and were forced to relocate to Upper Canada.

The chapel is graced by eight handcrafted stained glass windows that were installed from 1960 to 1962. The beautiful windows tell a visual story of the Mohawk people starting with “The Formation of the Five Nations” and finishing with a window depicting a former residential school.

One of the eight stained glass windows at Her Majesty’s Royal Chapel of the Mohawks. Called “Residential School Days”, the window is a tribute to Susan Hardie, granddaughter of Molly Brant and Sir William Johnson, who attended the residential school as a child. Photo Credit: Roxanna Nazarowicz

From 1832, residential school students at the Mohawk Institute, originally across the street from the chapel, attended services here every Sunday. In 1903 the school building moved to its location on Mohawk street in Brantford and functioned as a residential school until 1970. The school is now part of The Woodland Cultural Centre, operated in partnership with the Six Nations of the Grand River.

See the H.M. Royal Chapel of the Mohawks and Woodland Cultural Centre websites for up to date visiting information.

Her Majesty’s Royal Chapel of the Mohawks and the Woodland Cultural Centre are both part of our Passport Places program, a National Trust for Canada membership benefit where members get complimentary access to these fascinating places, as well as 1000+ National Trust Places abroad.
Become a member today!