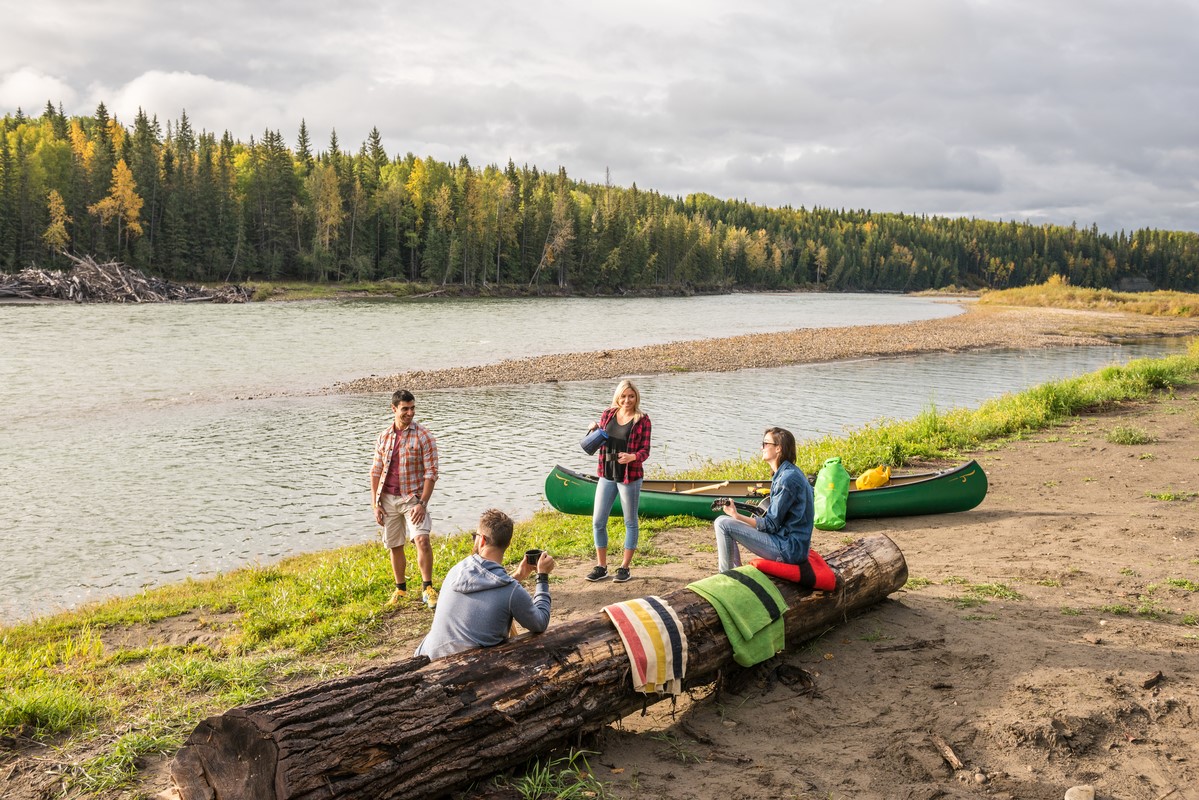 Urban heat island getting you down? Take a break from the concrete jungle at one of these historically significant picnicking sites. Enjoy your cheese strings in peace with the knowledge that your snack spot has deep ties to the past. When we gain an understanding of our environment in the past, we develop a deeper appreciation for it in the present. Keeping these stories alive is the key to maintaining these sites for the future. 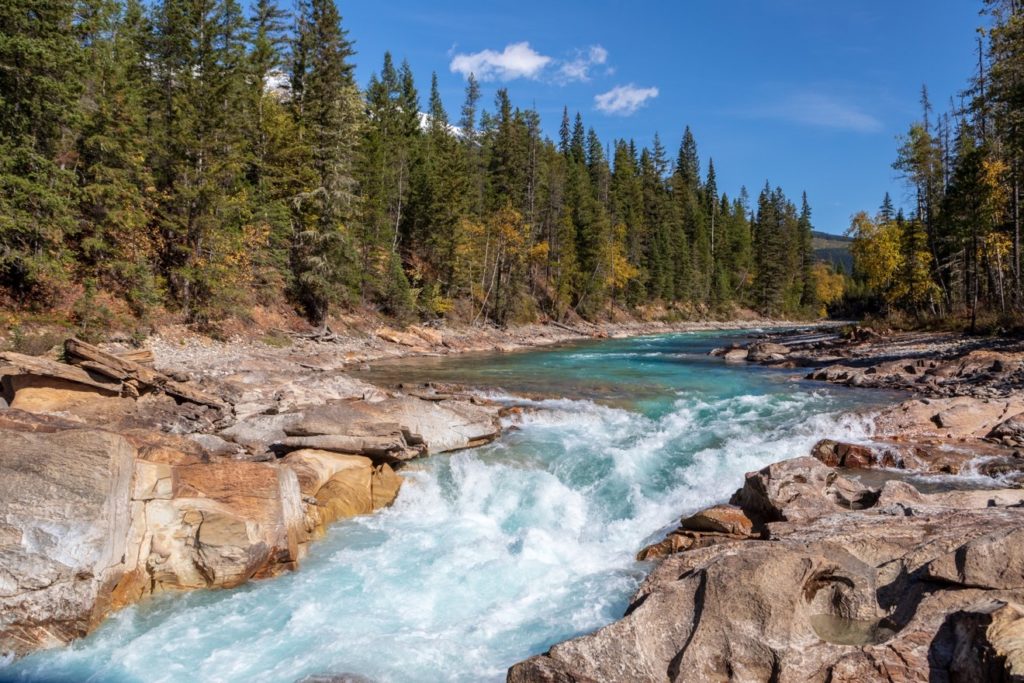 Grab a walking stick and make the climb to the Thompson Falls, part of the Thompson Falls Waterfall Hike along the Blaeberry River. The falls are named after British-Canadian fur trader, surveyor and map-maker David Thompson, born in 1770. Thompson, renowned as a skilled navigator, travelled 90,000 kilometers across North America and mapped out 4.9 million square kilometers of land, including the land surrounding Thompson Falls. Nearby, Howse Pass was used by Thompson and the North West Company as a trading route between the Rocky Mountain House to the Columbia Valley until 1810.

Thompson’s contributions have not gone unrecognized; among many other memorials, he was honoured on a Canada Post stamp in 1957, and referenced in Stan Rogers’ classic folk song “Northwest Passage:”

“And through the night, behind the wheel, the mileage clicking west
I think upon Mackenzie, David Thompson and the rest
Who cracked the mountain ramparts and did show a path for me
To race the roaring Fraser to the sea.”

Bring with you: hiking boots and Nanaimo bars. 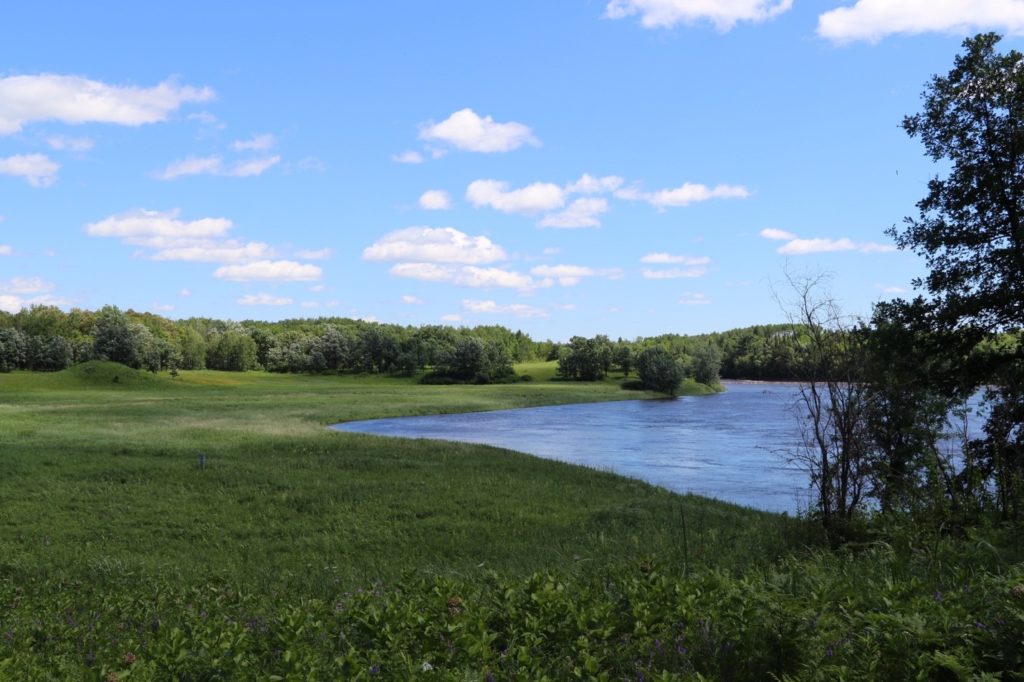 Kay-Nah-Chi-Wah-Nung –The Place of the Long Rapids – represents over 8,000 years of recurring use or habitation. Artifacts found nearby, dating back 8,000-9,000 years, include parallel flaked spear points, bifaces, scrapers, and stone flakes from tool making, left by Early Precontact peoples who travelled as they hunted. Archeological evidence suggests that this site was first inhabited around Middle Precontact Period, between 2,000 – 8,000 years ago, where groups were known to have worked with naturally occurring copper from Lake Superior.

Around 800-2000 years ago, the land was inhabited by the Laurel Complex, known for an elaborate social and ceremonial structure. These were the first peoples in the region known for building burial mounds, which are still visible today.  These mounds, built over shallow pits into which the remains of ancestors were placed, range from 18 to 24 meters in diameter and up to seven meters high.

Bring with you: organic berries and a medicinal plant guide – but, hands off: collecting plants from here is not allowed. 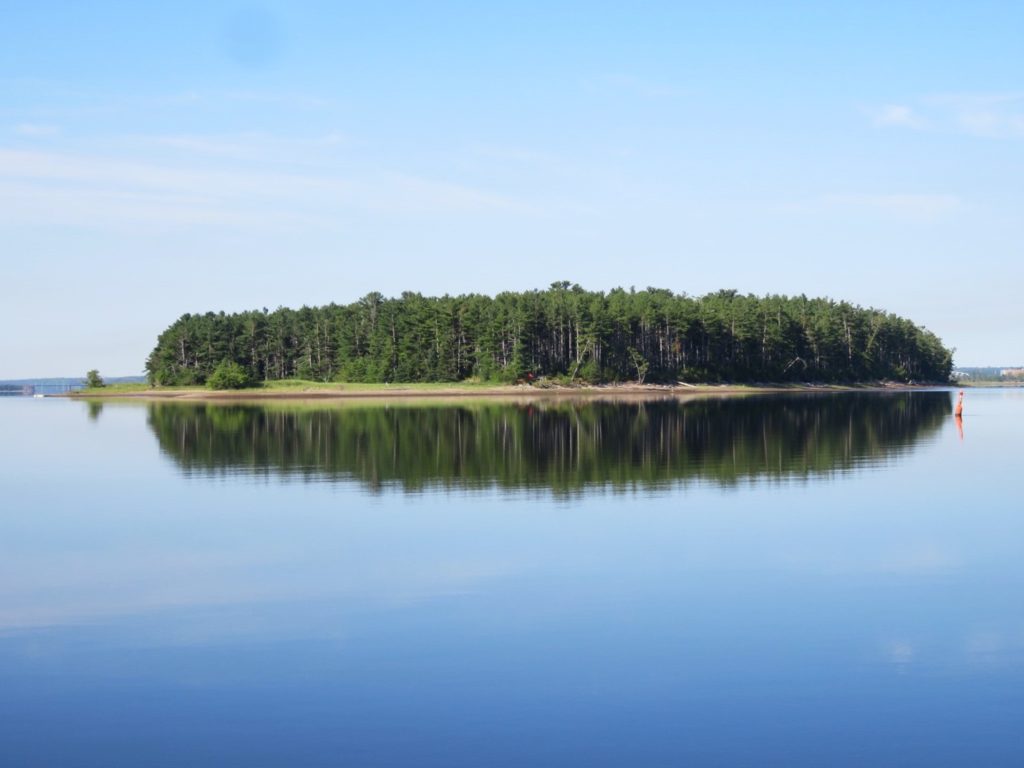 Pack a lunch and an oar and paddle out to Beaubears Island, located at the confluence of the Northwest and Southwest Miramichi Rivers. The site has a multi-layered history: the island, once Mi’kmaq meeting ground, would later become infamous as one of the largest Acadian refugee camps in the province of New Brunswick during the Acadian Deportation. These colonists of New France refused to swear allegiance to the British Crown, and were expelled in the 1750’s after Britain’s military conquests in Canada. Many Acadians died on the island as a result of starvation or disease while awaiting rescue.

Bring with you: a life jacket with Acadian Fricot and a galette blanche 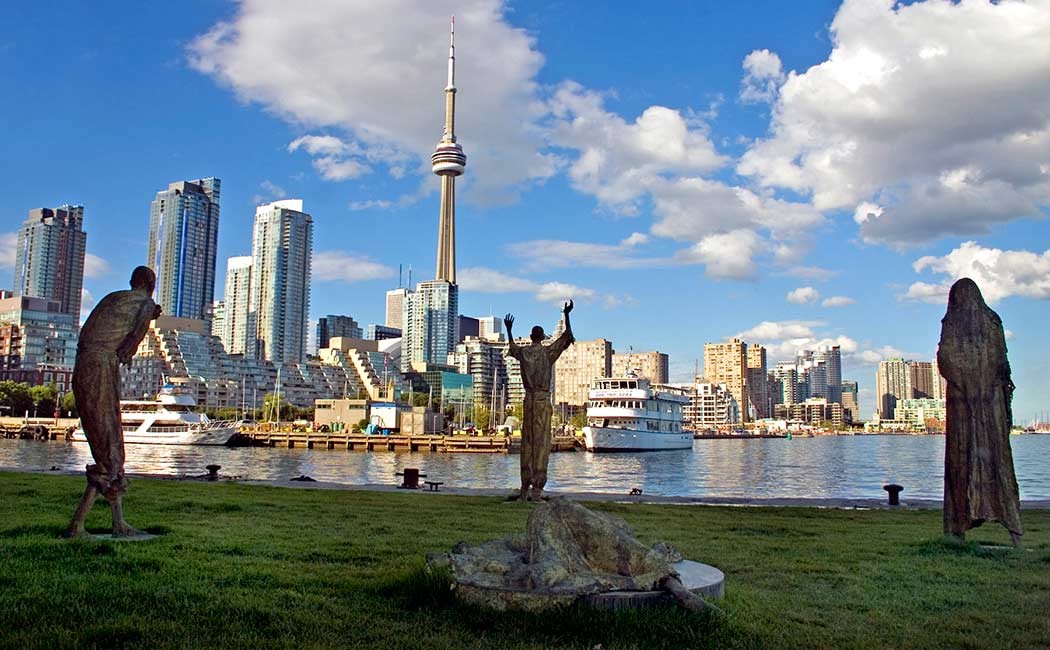 For a getaway from the bustle of downtown Toronto, take a stroll down to the shores of Lake Ontario. The park, officially opened in the summer of 2007, commemorates the tens of thousands of Irish immigrants fleeing their home during the Great Famine. In 1847, over 38,000 Irish immigrants landed on the site that the park now occupies, hoping to find a new life in a promising country. The statues, designed by renowned sculptor Rowan Guillespie, represent the Irish arrival in Toronto, and mirror a similar group of statues in Dublin that commemorate their departure.

Bring with you: sunglasses and traditional Irish pot pie.

Pack the sandwiches and the snacks for this one, because the Cartier-Brébeuf National Historic Site contains multiple layers of history to discover. The site commemorates the second voyage of explorer Jacques Cartier during 1535-1536, when he believed the Saint Lawrence River could provide access through the continent to Asia. During the harsh winter of 1535, Cartier and his crew settled near the Iroquoian village, Stadacona. Many caught scurvy and died on-site.

The park also memorializes the first settlement of Jesuit missionaries in Quebec in 1625, established almost a century after Cartier’s voyage, named Notre-Dame-des-Anges. The park has had many uses since that time, including serving as a brickyard in the late 1600s, a shipyard in the mid 1800s, a sawmill towards the end of the century, and a junkyard during the 1940s and 50s. During the 1980s, the city attempted to build a long house on the site to represent the type of building the Saint-Lawrence Iroquoian lived in – however, the first attempt was burned down in its very first year by a criminal fire. This was followed by a series of archeological digs and re-structuring that continued into the 2000s. The site was completely reopened in 2010, the 475th anniversary of Jacques Cartier’s second voyage.

Bring with you: citrus fruits for the Vitamin C. 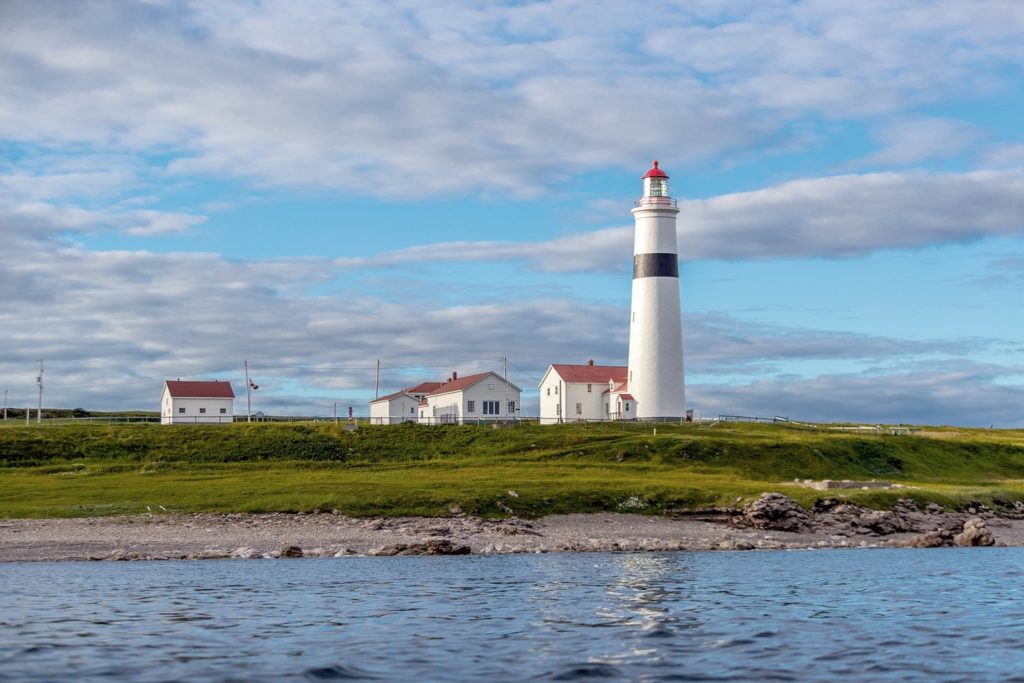 If you have a hankering for an iceberg view, head out to Point Amour Lighthouse, where such sightings aren’t uncommon. In fact, during springtime, the Straight of Belle Isle is often referred to as “Iceberg Alley,” due to the occurrence of thousand-year-old ice passing through from Greenland.

The lighthouse itself was built during the 1850s, when increasing numbers of transatlantic steamships coming from Europe faced danger due to the ice flows and strong currents. The Point Amour lighthouse was one of four stations built in the Gulf of St. Lawrence and Straight of Belle Isle to guide ships to safety. In the days before communities were linked by inland roads, these lighthouses were often stopovers for travellers traipsing up the coast by dogsled or on foot.

Bring with you: Fish and Brewis, and a windbreaker. 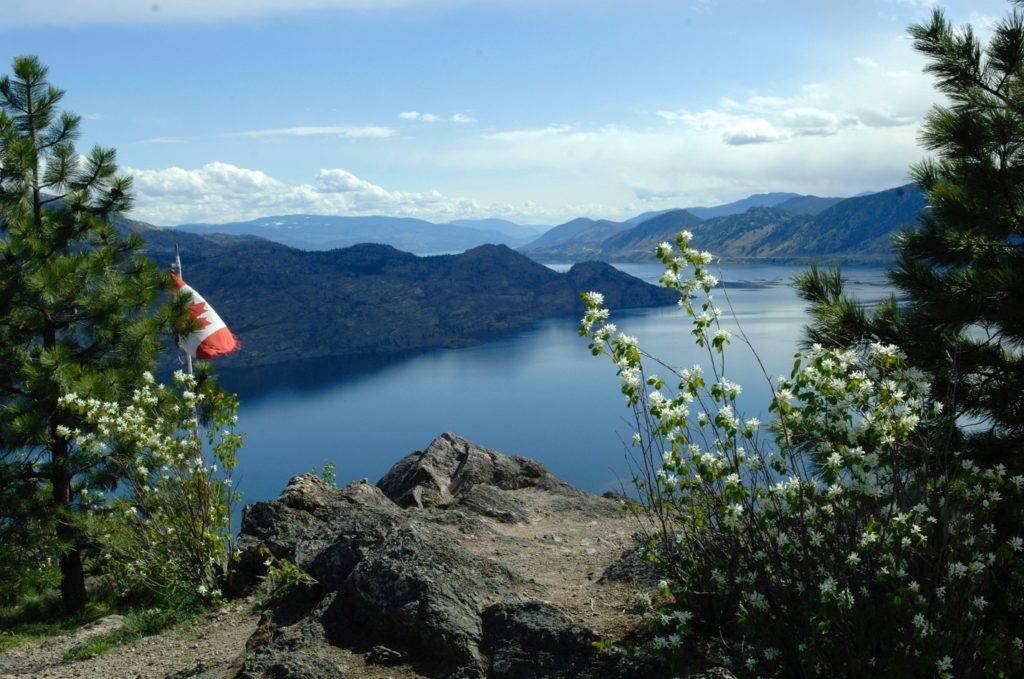 Forget about rooftop patios – no city vista could top this view. Originally a trail used by First Nations for hunting and trade, the Hudson’s Bay Brigade Trail was an important element in the province of British Columbia’s early development.  The trail, completed in 1849 with the help and guidance of local First Nations, was one of two routes used by Hudson’s Bay Company fur traders to transport goods and supplies between the coast and inland headquarters. It was also part of the route taken by the “Hudson’s Bay Express,” an annual shipment of books and profits to company headquarters.

The first wagons – eight in total, carrying supplies to the trading posts – reached the Okanagan via the Brigade Trail in 1858. Then, the trails of this region saw a traffic boom during the 1860’s following the Cariboo Gold Rush, as workers used the path to migrate towards the mines. However, it wasn’t until 1898 when the first post office with the postmark “Peachland” was opened, and town development officially began.

Bring with you: a peach, of course! 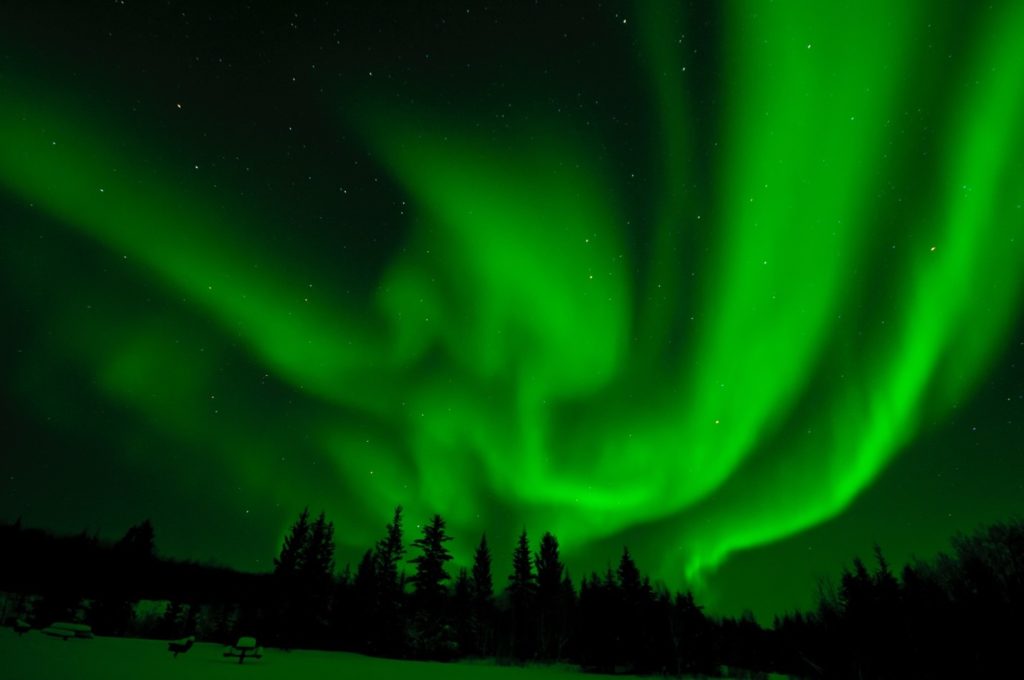 The land now named Wood Buffalo National Park, designated in 1983 as a UNESCO World Heritage Site, has been inhabited by human cultures since the end of the last ice age. It is located in northeastern Alberta and the southern Northwest Territories. Archeological evidence suggests that Indigenous people inhabited the land as much as 8000 years ago.

Keep an eye out for whooping cranes –  the park protects the sole nesting area of the last wild migratory flock of whooping cranes in the world. During the early 20th century, the location of the bird’s nesting areas was a mystery. It wasn’t until 1954, when a forest fire drew rangers in helicopters to the site, that they were seen nesting in Wood Buffalo National Park.  Following this discovery, a team of conservationists made several taxing expeditions into the depths of the wetland terrain, and finally saw the birds with their own eyes. The species had faced near-extinction due to habitat loss during the 1940s, when the population numbered only 22 birds after totalling an estimated 1500 in the 1850s. Happily, by 2018, the number of birds had risen to 505 – the highest estimate in over half a century!

Bring with you: Whoopie Pies and a Field Guide to the Birds of North America