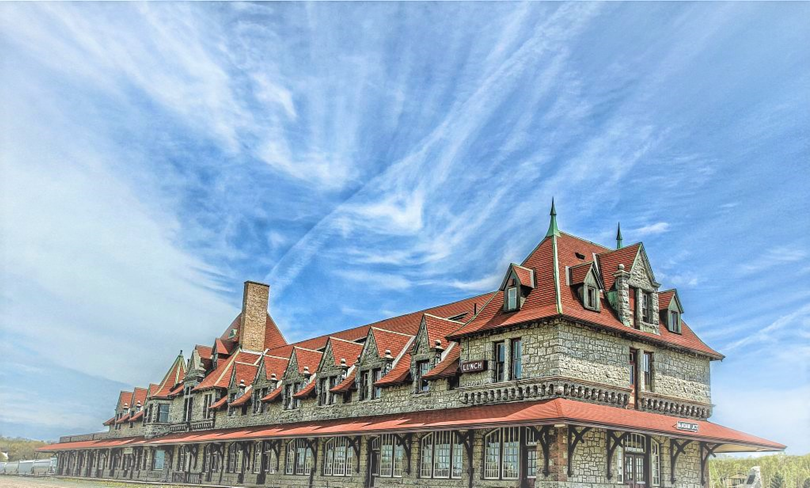 The McAdam Train Station, a Place for People

Built in 1900 using locally quarried granite, with extensive additions in 1910-11, this large, impressive building (87 by 14 metres) was designed by architects William and Edward Maxwell, two of Canada’s most creative station designers, and constructed by Joseph McVey. It once supported a first-class five-star hotel and dining room. It is a rare surviving example of the Chateau style favoured by the Canadian Pacific Railway (CPR) during the early 20th century, as well as being one of the few to incorporate a hotel in its plan.

At the time, the town of McAdam was the principal junction for trains travelling east and west between Montreal and the Maritimes, and north and south from St. Stephen to Edmundston. At its peak, up to 16 passenger trains a day came through, filling the waiting rooms to overflowing. According to the Canadian Register of Historic Places, it was this strategic position–and the importance of the clientele–that prompted the CPR to erect an impressive and imposing station offering telegraph, dining and hotel facilities. It even included a single prison cell.

The structure has held National Historic Site status since 1976, became a Provincial Heritage Site in 2003 and is designated under the Heritage Railway Stations Protection Act.

The last regularly scheduled passenger train passed through McAdam in December 1994, and the station was subsequently closed. When the CPR abandoned all of its operations east of Montreal, the station was acquired by the New Brunswick Southern Railway Company, which in turn transferred it to the McAdam Historical Restoration Commission.

The commission’s early efforts focused on fundraising, roof upgrades and necessary repairs. One of the first major transformations for the station was the repair of its platform overhang, which had suffered years of structural damage as a result of snow buildup from the main roof.

To keep the momentum growing for the rebirth of the station, the commission recognized that it was essential to engage the community. On the Canada Day weekend in 2000, McAdam staged Celebration 2000: Village of McAdam Homecoming. To help celebrate both this and the 100th anniversary of the station, the commission opened up a small part of it to the public. That event helped launch a new tradition: since then, McAdam has celebrated July 1 as “Railroad Days” with activities in and around the station.

As community interest and involvement increased, the station became firmly established as a hub of activities. This brought into sharp focus the building’s need for repairs. In order to open additional areas of the station, the community estimated more than $380,000 was needed in restoration costs.

The project’s finances received big boosts in 2005 and 2006 when the federal Atlantic Canada Opportunities Agency’s (ACOA) Strategic Community Investment Fund committed $235,000. The New Brunswick provincial government followed with $30,000 through the Heritage Branch and $65,000 from the Regional Development Corporation.

The McAdam Historical Restoration Commission, however, still had to raise the remaining $50,000. This was an intimidating challenge for a village with a population of just over 1,500. Despite the odds, the community came together to get the job done. Fundraising events included guided tours, space rentals, expanded activities and festivals, themed luncheons and dinners, a donations campaign, membership fees and a personal donations program. More recently, the commission launched the Chair Campaign, through which individuals or businesses purchase a replica chair in honour of a past railway worker.

The station’s open-door approach increased community participation. Showing the public how their donations were being spent increased momentum for more fundraising.

In September 2007 the station held a railway workers reunion that was not only well attended by past workers but allowed them the opportunity to recall their histories of the railway in Canada.

The lunch counter, added in 1911, served breakfast upwards of 1,200 passengers arriving daily from Boston and Montreal.

When provincial funds for the station were announced in May 2006, the Premier of New Brunswick said “The railway station has become a defining symbol of the village of McAdam.” The station is a symbol not only of the rich railway heritage in this country but also a symbol of the efforts of a small village that continues to foster a strong sense of identity. The McAdam station is once again a place for people.

The success of an active historic site is only as strong as the community that supports it. This rings true in McAdam, where at its heart the McAdam Railway Station stands as a recognizable part of Canada’s built heritage.

“The history of Canada is the history of the railroad, and this beautiful, grand structure is a surviving testimony to the wonderful, grand dreams of a nation like no other, which came to be against all odds,” said Frank Campbell of the McAdam Historical Restoration Commission (MHRC).

The MHRC, in charge of the rehabilitation project since 1996, has a multi-faceted mandate to preserve, restore and rejuvenate the Canadian Pacific Railway station. Over the past 10 years, a group of 20-30 members, mostly seniors, have worked to bring this mandate to fruition. Without their tireless efforts, the project would not be where it is today.

McAdam’s mayor Frank Carroll is also the commission chair and his fundraising achievements and successful partnerships with the federal and provincial governments have been pivotal to the ongoing success of this conservation project.

The site attracts nearly 25,000 visitors yearly to McAdam, which is roughly one hour from Fredericton.

The station is already thriving with community involvement, and the commission plans to eventually operate the site as a full-fledged living museum. Presently, guided tours are offered daily from 10 a.m. to 6 p.m. The $3 cost of the tour goes directly towards the upkeep of the station. Once famous for their 10 different types of railroad pie, the McAdam Railway Station dining room and lunch counter are once again open and available for group rentals.

The small town of McAdam looks forward to visitors and continues to pride itself on being home to this national historic site.

Written by Ronald J. Roy, a native of New Brunswick and a graduate student at Carleton University in Ottawa studying heritage conservation and urbanism.