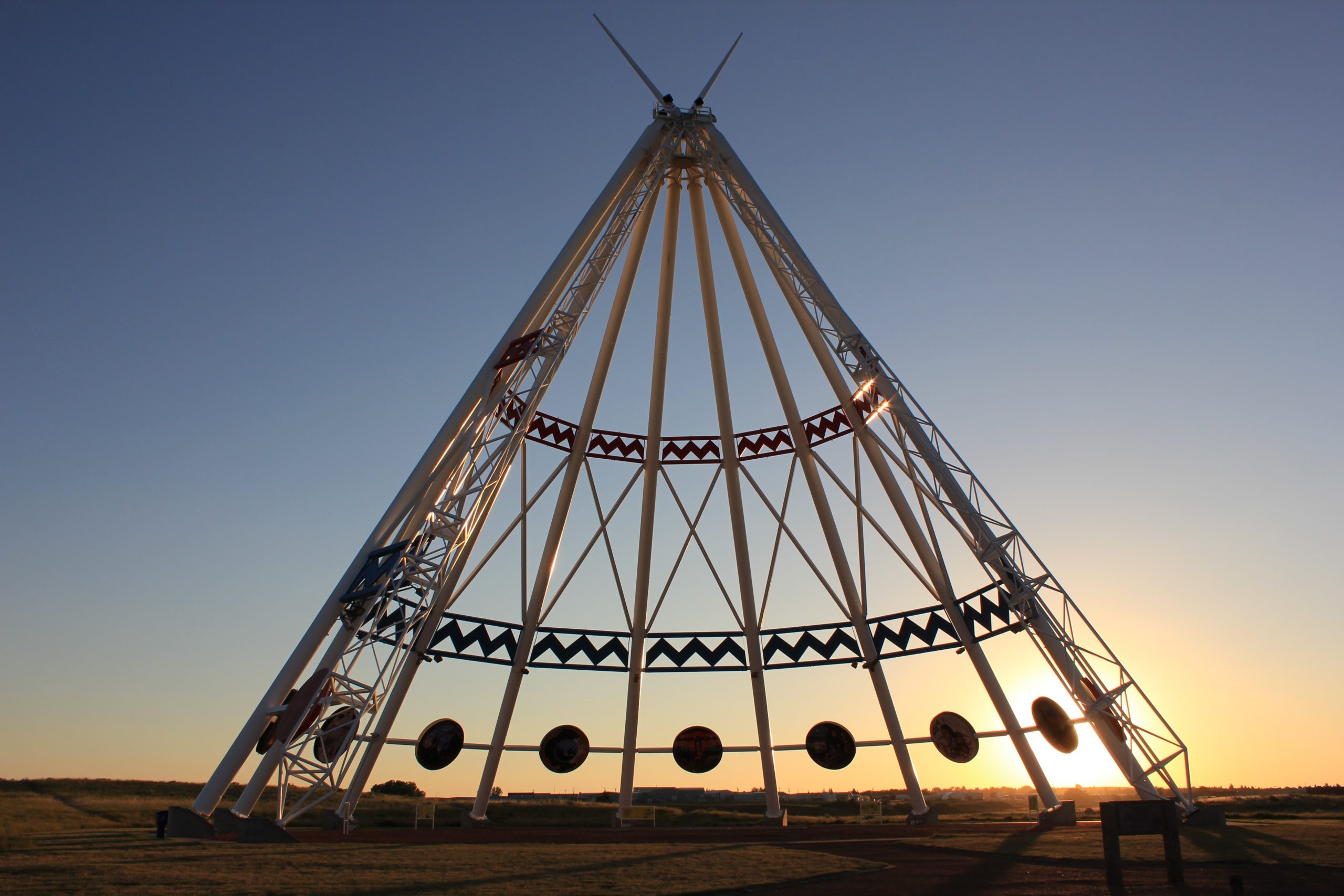 As travelers cruise east from Edmonton on Alberta’s four-lane Yellowhead Highway, they soon have a monumental decision to make – whether to keep driving or turn off to behold Mundare’s giant attraction.

The small Alberta farming town of Mundare (population 852) is a fascinating place with a century-long history of Ukrainian settlement, a large Basilian Fathers museum, an elaborate and beautiful Ukrainian Catholic grotto constructed by volunteers during the 1930s, and a charming main street of Art Deco vernacular buildings. But most visitors breeze past all of these and head straight to the north end of downtown to marvel at Canada’s largest sausage – a U-shaped Ukrainian Kielbasa towering red, improbable, and mouth-watering against a blue prairie sky. Erected in 2001 and weighing in at 12,000 pounds, the robust fiberglass statue cost about $120,000 to create, can withstand 160 km winds, and is stewarded by its own non-profit foundation. 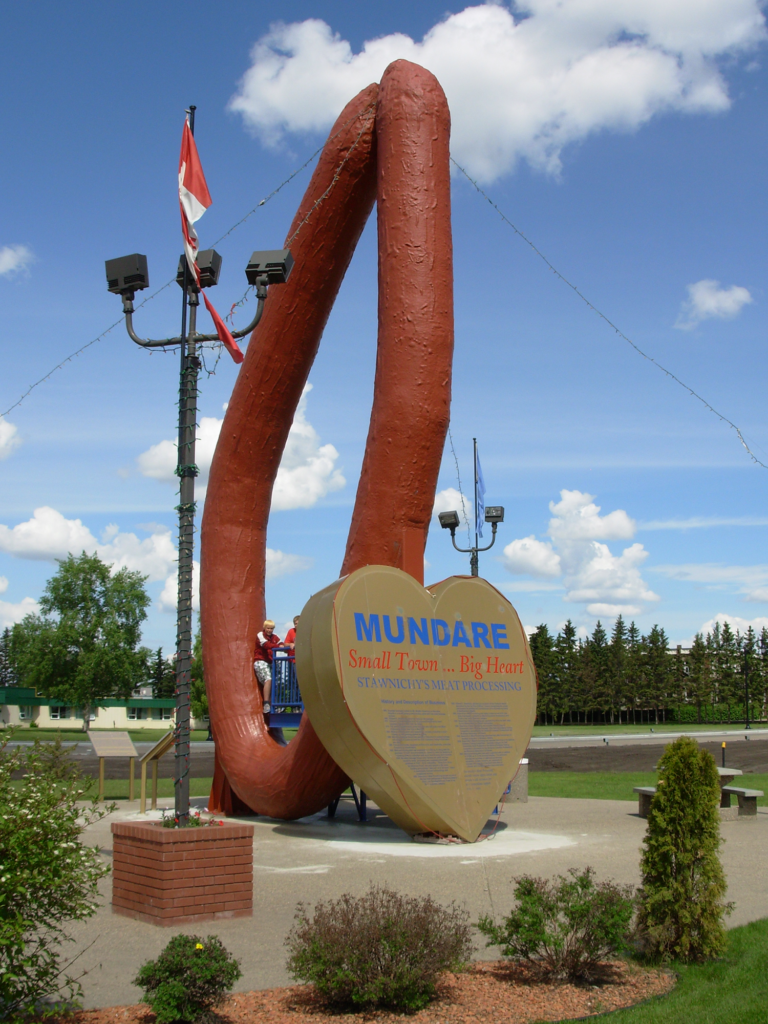 When I visited Mundare several years ago, I stood awestruck on the metal viewing platform in the “saddle” of the upturned sausage link, marveling at the 42-foot fiberglass behemoth and baffled by the smell of garlic in the air. I quickly realized that the aroma was wafting over from Stawnichy’s Meat Processing, the 60-year-old deli and sausage plant across the street and the town’s most famous business. Stepping back to take it all in, I wondered what had prompted this gargantuan expression of local pride, and what would happen to this well-loved structure in the coming years?

Quirky and eccentric though they often are, the “big things” that pepper towns and cities across Canada have inexorably wormed their way into local identity. Whether they ever become “heritage” in an official sense, or receive heritage designation, is probably beside the point. But why shouldn’t they receive the “heritage” blessing? Currently, even Canada’s most famous big objects – like the nickel in Sudbury, ON (1964) or the Pysanky in Vegreville, AB (1975) – have no heritage status or protection. While many of these place-makers may have begun as Chamber of Commerce marketing gimmicks, most have won over the hearts of locals and travelers alike, and the heritage conservation community may need to consider widening its gaze and embracing these larger-than-life pop culture and folk art icons.

As heritage places, however, the fate of the Goose in Wawa, Ontario opens up thorny questions about the conservation treatment of big objects and “authenticity.” The first Wawa Goose, for example, was built of flimsy plaster in 1960, replaced in 1963 by a steel version that soon began to corrode and was in turn replaced by a bronze version in 2017, said to be virtually indestructible. While the steel head of the 1963 goose will be saved, the remainder of the body was purportedly melted down into souvenirs. Does the heritage value of Wawa’s Goose lie in the form and context and not in the material itself? This may be a conversation best left for a National Trust conference seminar room…

The origin of big objects really began in California in the 1920s with the development of eye-catching often zany commercial buildings. Responding to car culture and the need for attention-getting scale, US Route 66 commissioned in 1926 saw the addition of these giant objects as tourist attractions. The US National Trust for Historic Preservation is now working to save Route 66 icons in the United States, and the State of California is inventorying and saving these rapidly disappearing sites. 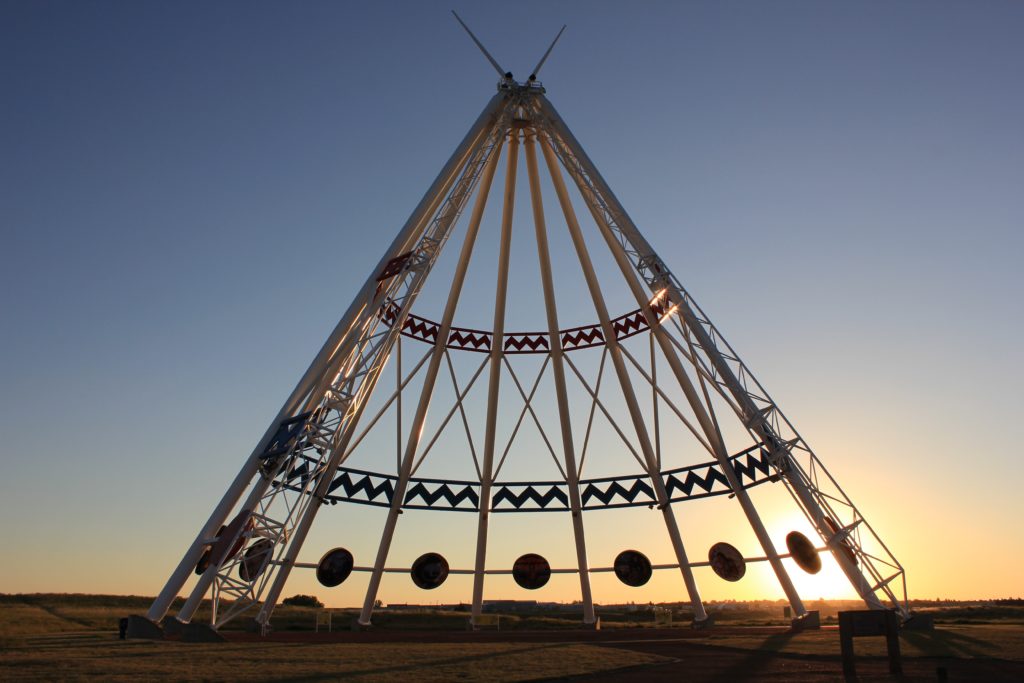 The 20-storey Saamiss Tee-Pee towers over the Trans-Canada Highway in Medicine Hat, Alberta.

As Canadians (hopefully) throw off the COVID-19 lockdown shackles this summer and hit the open road, they will no doubt feel the irresistible magnetic pull of Canada’s wealth of big things. Here are some worth hitting the brakes for:

Are there big things you are passionate about? Share pictures of your favourites on social media and tag us, @nationaltrustca, so we can see!