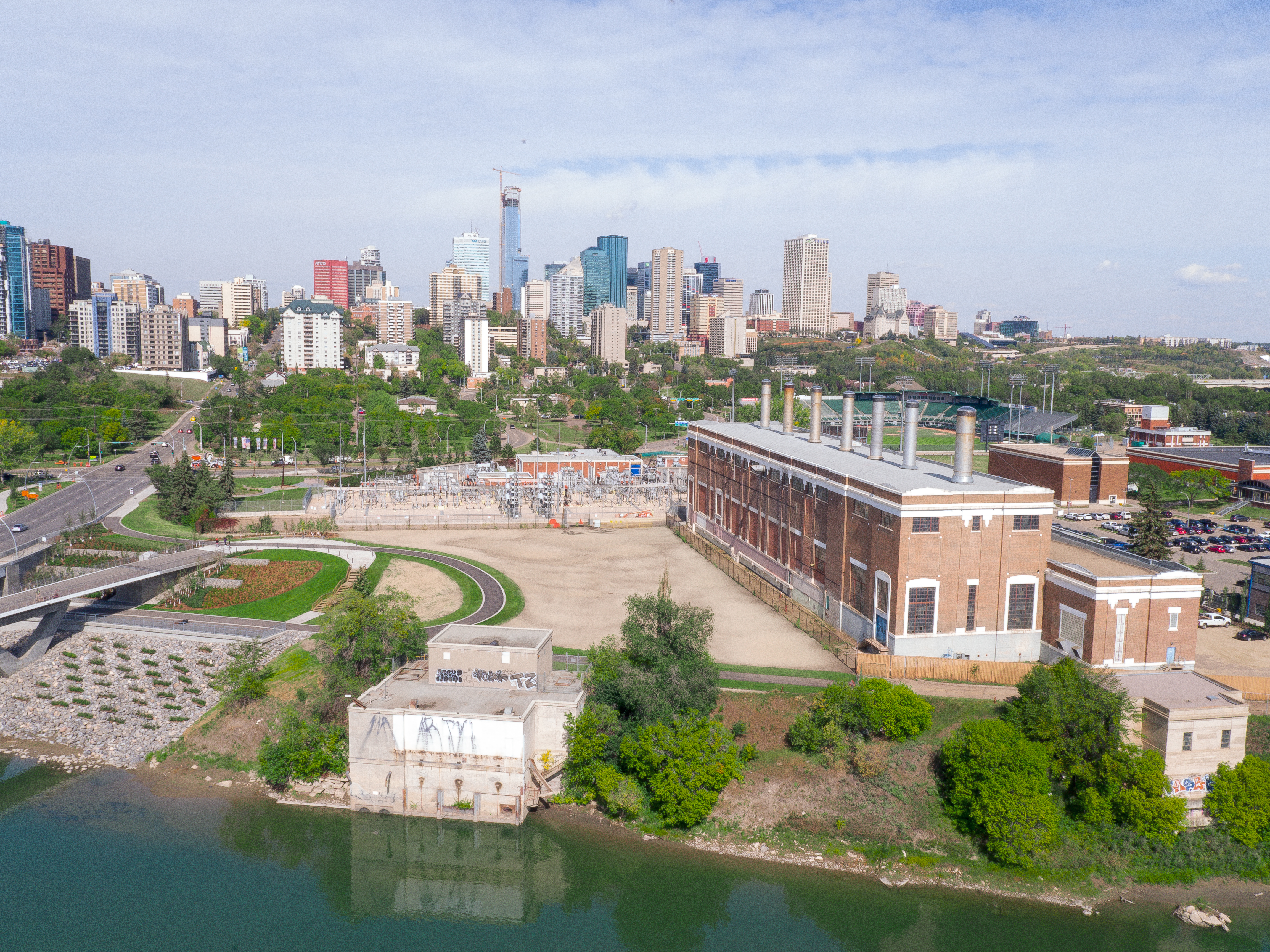 Once facing the threat of demolition, the Rossdale Power Plant is now an integral piece of a redevelopment plan for the Rossdale neighborhood in Edmonton. On the banks of the North Saskatchewan River in the heart of the city, the Rossdale Power Plant supplied power to the growing Edmonton community starting in the early 1930s. There are many layers of history on the site: thousands of years of traditional use by Indigenous peoples, fur trading and other activities associated with the Fort Edmonton, Prime Minister Wilfred Laurier’s inauguration of the Province of Alberta, along with economic, recreational and industrial activities reflective of the evolution of Edmonton from settlement to city.

Generating one quarter of Alberta’s power in 1970, the Rossdale Power Plant’s Low Pressure Plant (comprised of a Boiler Hall, Turbine Hall, and Switch House), Pumphouse #1 and Administration Building are now designated as a Provincial Historic Resource. These structures and Pumphouse #2 are also listed on the Inventory of Historic Resources in Edmonton.

The power plant is an important layer in the history of the city and the province – one that has hopes of hosting yet another layer in the story of Edmonton. However, the complex has been sitting vacant and unused for the past 10 years, except for the Administration Building. The power plant was decommissioned in 2009 and more recently, the mechanical components were removed, leaving only the shell of the Low Pressure Plant. The power plant was listed as one of the Top 10 Endangered Places in Canada in 2013 after demolition threats by EPCOR Utilities Inc. (who currently own the building) and stalled city efforts to invest in the complex.

However, the future of the Rossdale Power Plant is looking up! After the City of Edmonton made an initial investment in 2015 to stabilize the Low Pressure Plant, it has supported efforts to re-imagine the future of the area, with the Rossdale Power Plant at the heart of the action. The City has hosted visioning workshops, conducted surveys, and prepared a heritage interpretive plan that was approved in July 2017. Harnessing that momentum, planners prepared a business plan that was approved by Edmonton City Council on September 10, 2019 along with direction to begin the early stages of project implementation. Together the heritage interpretive plan and the business plan are a road map to a successful redevelopment and revitalization project rooted in the unique history of the place.

While the prospect of the project is bright, it’s not without its challenges. The power plant is surrounded by obstacles including a functioning water treatment plant, an electrical sub-station, the river bridge, a burial ground with Indigenous significance as well as car-centric arterial roads. The plan for the River Crossing area outlines objectives focused on growing the community, revitalizing the neighbourhood ballpark, creating open spaces for gathering, simplifying and humanizing the roads, and activating the riverfront – specifically nodding to the adaptive reuse of the power plant. The business plan acknowledges the challenges posed by the power plant: it requires a detailed assessment, physical upgrades, governance decisions and funding. However, the sequenced activation of the power plant presents exciting opportunities in the short term. Once ownership of the building transfers to the City, which is expected next year, and limited, strategic renovations are completed, temporary uses and activities can be hosted in the building and surrounding site while the planning work continues and longer term decisions are made.

Recently, the Low Pressure Plant became the venue for an EPCOR-sponsored party as part of a conference. This event reignited excitement for the possibilities of the power plant in the future in a tangible way for the whole community to see. If the City takes ownership of the complex, the Low Pressure Plant may be used as an event venue on a regular basis. Over time, portions of the complex may take on new functions as space for community programs, office space, restaurants, or performance spaces. The City is focused on making the power plant a people space. The open-ended vision for these historic buildings will allow them to evolve organically as the surrounding land, which has high potential to be designated as a historic area, is reimagined.

Erik Backstrom, a Senior Planner with the City of Edmonton, noted that interest is coming at various levels: from people interested in animating the complex, groups interested in operating the facility, and tenants interested in leasing space. He acknowledged “the focus is more on who can occupy the building and how it can evolve.” Ultimately, the City has been playing a leadership role in the potential adaptive reuse of the Rossdale Power Plant, harnessing the potential of a unique heritage resource.

The National Trust Conference is coming to Edmonton October 3rd to 7th 2020, and this once endangered place will definitely be on the agenda. 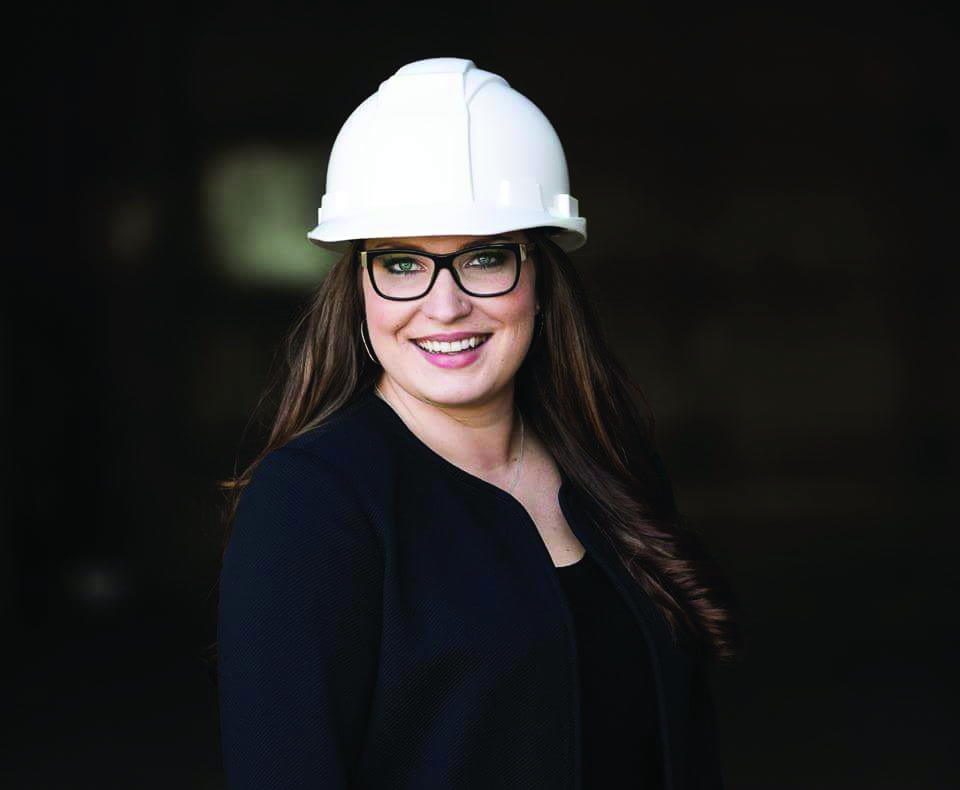 Ali is the Regeneration Project Manager for the National Trust for Canada. She completed her professional Master of Architecture degree (2015) as well as her Bachelor of Architectural Studies (2013) at the Azrieli School of Architecture and Urbanism, Carleton University in Ottawa. Ali has been a researcher at Carleton Immersive Media Studio (CIMS) on the Cultural Diversity and Material Imagination in Canadian Architecture (CDMICA) project under the direction of Dr. Stephen Fai. She has also worked as an Intern Architect with Heritage Conservation Services at the Government of Canada and is CEO and Founding Principal of The Heritage + Design Company.