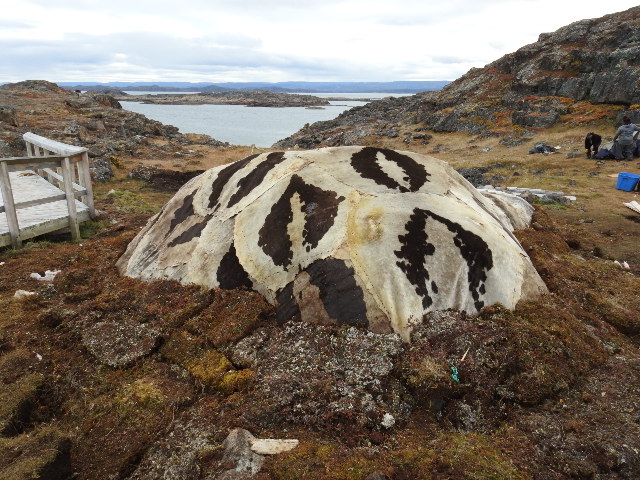 Several years ago, a team of archeologists uncovered the remains of a sod house, a traditional Inuit structure, near Iqaluit in Nunavut. Today, a replica structure stands nearby, an icon of local heritage.

“In Nunavut,” says Torsten Diesel, project manager at the Inuit Heritage Trust, “there are few places where the community can see their own material past. We thought this would be a good opportunity to create such a building to showcase traditional Inuit life.”

According to Diesel, the idea came from Inuit elder Inookie Adamie, whose great grandmother once lived in the now abandoned structure located in Qaummaarviit Territorial Park. Adamie gave the Inuit Heritage Trust permission to excavate the remains of the sod house in 2017, and plans for the replica began the next year.

Now, visitors to the structure will see a low wall above ground level, and a domed roof covered in seal skin. While traditionally, the roof would have been made of two layers of seal hide with feather insulation in between, the Inuit Heritage Trust opted to replace one layer of seal skin with canvas.

Diesel says that similar structures could have been constructed by the Thule people from around 1000 AD until the early 1900s.

Diesel worked alongside five community elders, local Meeka Mika and Adamie himself to plan the building’s construction. He says almost forty people from the community contributed, from the hunting of seals for the roof cover, to the construction of the structure itself.

“The local community has a feeling of ownership,” says Diesel. “Even now, this core group is excited to maintain the building. It instills a lot of pride in the community, and brings the elders’ stories to life.”

Next, Torsten says that the goal will be to build a museum to house material culture from Nunavut. This will include bringing home artifacts that were found around the house of Adamie’s ancestors, and subsequently sent across Canada for conservation.