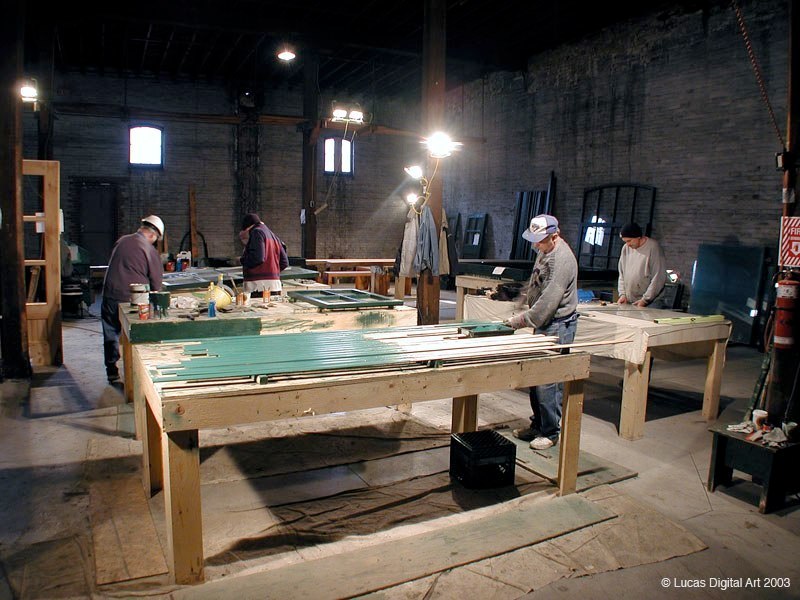 From Pandemic to Preservation: How SARS Kick-Started the Revitalization of Toronto’s Distillery District

The Distillery District may have become Toronto’s most iconic destination, but the catalyst for its rebirth took an unlikely twist – the SARS epidemic of 2003 and the suddenly idled labour force of the city’s film industry. As Canada looks to economic tools to aid its recovery from the COVID-19 pandemic, decision-makers should consider the lessons the Distillery District revival can tell us about the labour-intensity and lasting value that comes from heritage revitalization projects.

When the Gooderham and Worts Distillery shut down in 1990 after over 150 year of operation, it left intact one of the earliest factory complexes in North America. Little surprise, then, that between 1990 and 2003 over 900 movies were shot in and around its patina-rich brick buildings, making it the most important North American film location outside of Hollywood. Conventional attempts at property development on the site had failed in the past, so when Cityscape Development Corporation took over the vast complex in December 2001 they knew they would have to take an incremental, piecemeal approach to revival. “We quickly determined if we tried to build out the site in the usual way – retain consultants, master plan the site, prepare drawings and send out tenders to contractors – we weren’t going to last long,” recalls Cityscape Partner, Jamie Goad. “We realized we needed to do the work ourselves, and be nimble. A low-budget makes for good conservation because it really forces you to be creative and take a minimal intervention approach.”

Work got underway in mid-2002 with the focus on buildings which could quickly and easily be converted into leasable space for art galleries, theatres, and other creative industries. The project received a much needed influx of skilled labour when the SARS outbreak struck Toronto in February 2003 and abruptly shut down the city’s film industry. “Suddenly,” says Goad, “all of these incredibly talented art directors and carpenters who had built the sets for the movies shot at the District for years, and knew it well, had lost their jobs.” Cityscape put this influx of talent to work, from rehabbing interiors to rebuilding hundreds of historic windows and doors using heritage techniques. At one point that winter, over 400 construction workers were on the Cityscape payroll, with three shifts a day working around the clock.  The Gooderham and Worts complex reopened on May 23, 2003 as the Distillery District. Not long afterwards, as most of these workers left to go back to the film industry, they expressed their gratitude for the privilege of working on that storied heritage site. “They loved working there,” says Goad. “It was really very meaningful for so many them and equally for us! We’re really the custodians rather than simply the owners of this important site.”

As Canada looks for shovel-ready stimulus projects to get the post-pandemic national economy back on track, heritage rehabilitation work like that done at the Distillery District should be top of mind. There is a rich and growing body of data that consistently confirms that heritage rehabilitation creates over 21% more jobs than new construction. But beyond the data, heritage rehabilitation is inherently meaningful work, helping us save Canada’s most cherished sites, and creating the iconic gathering places of tomorrow.