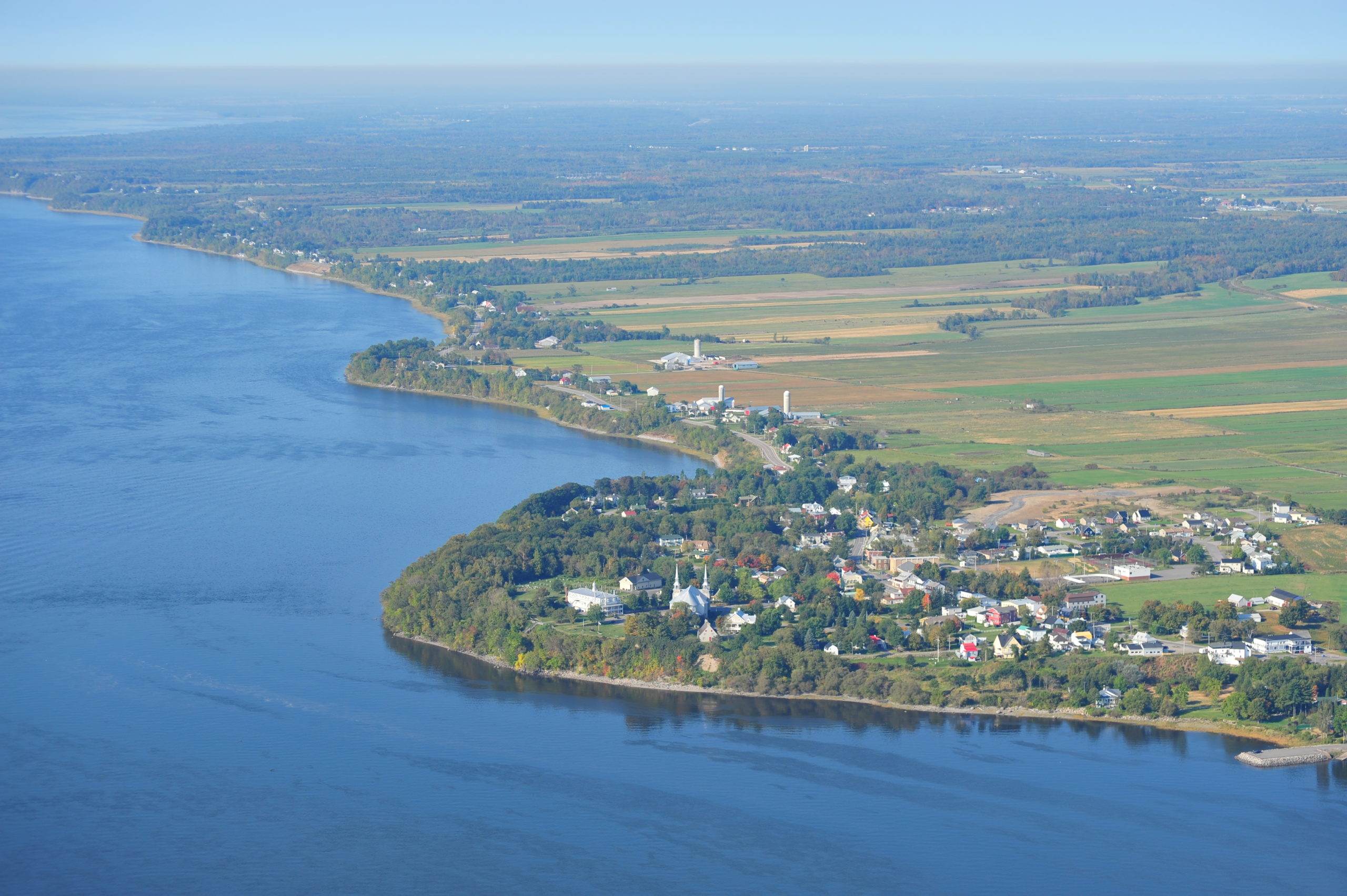 Reading the headlines these days, it seems like we are destroying our heritage. Yet, it is hard to say what exactly is causing this reaction. Is it an increase in public awareness, the media hype around demolished buildings, or mere indifference to the history behind protected and restored buildings?

This story is shared through a new partnership with Continuité Magazine. Translated and adapted from the original text published in the Winter 2020 Issue of Continuité.

While some communities manage to preserve their architectural heritage, all too often, that heritage is demolished before the public even knows it was there.

One thing’s for certain, the debate about heritage has made its way into public conversation, and that’s a step in the right direction! Especially since, according to its most fervent defenders, the greatest threat to our architectural heritage is being ignored or completely forgotten.

As Guylaine Dumais, network coordinator for the urban revitalization organization Rues principales, talks to me over the phone, she looks over at her office from a nearby patio in the Montcalm neighbourhood of Quebec City.

Her office has a stunning view of the Laurentian mountains…and the Videotron Centre. She doesn’t make any jabs, but merely mentioning the new Centre, which has won several architectural awards, conjures up images of the ridicule and criticism it has received.

The kindest critics say that it looks like a flying saucer or a smoke detector, whereas the more cutthroat instead liken it to a toilet. Despite all the controversy, this facility may one day be considered a heritage building worthy of protection.

Clearly, determining the meaning of “heritage” is a great first step towards consensus; otherwise, how do we know what we should be trying to protect? But what constitutes heritage is not as glaringly obvious as the stark white facade of Quebec’s Videotron Centre.

“The public decides what they consider to be part of their heritage,” explains Dumais. This means that although a building may be truly one of kind, if the general public doesn’t value it as such, protecting it becomes extremely difficult or even impossible.

Dumais is an expert in gauging what the public perceives as heritage, thanks to her work with Rues principales. The organization helps local citizens groups and elected officials revitalize downtown spaces, so preserving and restoring buildings is all in a day’s work.

A community’s identity is initially shaped by its “old” downtown, says Dumais, where everything started. That’s why Main Street in Rivière-du-Loup looks nothing like Main Street in Saint-Hyacinthe — because their histories are very different.

Even the materials the buildings are made of form part of a community’s heritage, explains Dumais. The wood used in one area may vastly differ from that in another, because the surrounding forests are different. The same goes for the stones and bricks.

In fact, both building materials and construction techniques are intimately linked to a specific culture and time period. Regrettably, the characteristic charm of “old” downtown spaces isn’t being captured in new commercial areas — the landscapes all blend together from one city or country to the next.

This is why recognizing heritage gems is a crucial first step in protecting them. Society may have the best policies in place, but if the building isn’t acknowledged as historically valuable, it won’t be preserved.

“Many small municipalities don’t have a lot of employees and, as such, no heritage experts,” he laments. No one has time to do surveys and follow-ups or take preventative measures.

If it were up to Lauzon, municipalities would be given the means to hire a dedicated individual to accompany and advise their mayors on heritage matters.

When investors pitch a new development project, it can be hard for city councils to accurately assess its impact and recognize the heritage value of an existing building, furthers Lauzon. If no survey was done on the building, it may fall through the cracks and be demolished without a second thought.

To make matters worse, there is also a lack of heritage education, especially among elected officials.

Renée Genest, the executive director of Action Patrimoine, stresses that when a new administration takes over a municipality, their awareness of heritage issues often needs to be built, almost literally, from the ground up.

Since its inception in 1975, education, training and awareness activities have been the driving force behind Action Patrimoine’s mission to promote and defend Quebec’s built heritage and cultural landscapes.

In Trois-Pistoles, QC, buildings located in the heart of the municipality have been restored in recent years, including the Boucherie Centre-Ville. Photo credit: SADC des Basques

Even once a city’s heritage assets are acknowledged, other obstacles may stand in the way of their protection. Mayor Lauzon blames “unsuitable taxation” where municipalities must take on more and more responsibility without the financial means to support these actions.

According to him, the measures stipulated in the Cultural Heritage Act should be adapted to suit each individual region. For example, Montreal’s heritage protection measures should differ from those in Trois-Pistoles.

The Act should also provide the same methods of heritage protection (especially financially) regardless of whether the asset in question is of local or national interest.

On top of not always having the means to intervene on their own, sometimes municipalities can’t financially support the owners of heritage buildings.

As such, it’s difficult to demand renovations using certain materials or specific techniques. This sometimes forces owners to give up on maintaining their building until it is ultimately demolished.

Genest points to Action Patrimoine’s position that reviewing a building’s heritage evaluation and upgrading its classification are crucial. This was the case recently, when the media zeroed in on Quebec’s Maison Pasquier, a late-18th century home that was torn down without question.

The home was listed as a City of Quebec heritage building but was not classified as being of particular or special interest. In compliance with the laws and regulations in force, the City simply granted a demolition permit.

“Depending on the building’s classification, there may or may not be a committee that judges whether it can be demolished,” explains Genest.

She stresses that this way of doing things forces elected officials and the general public to fight for preservation instead of promoting it. This approach lets buildings like the Maison Pasquier slip through bureaucratic loopholes, despite knowledge of their existence and unique qualities.

“Instead of thinking about each building individually, we need to expand our definition of city planning and buildings in general,” urges Genest. “We have to look at the big picture. The concept of ‘heritage’ is often an afterthought in most development projects.”

Awareness and education remain the core of heritage preservation. Dumais believes that the worst thing is to force protection and that “we must help, support, finance and put in place the necessary tools.”

“In the end, it is the responsibility of the general public and elected officials to take charge and inspire others to push for heritage protection,” she asserts. “Heritage can build pride in a community, and that pride is a key driver.”

As the coordinator of Rues Principales, she suggests taking “baby steps” and points to Trois-Pistoles, in Bas-Saint-Laurent, as a prime example of this strategy.

“When you restore a downtown one building at a time – two or three a year – after 10 years, it really adds up,” she explains. “Trois-Pistoles restored a sense of pride in their community and saw new businesses open their doors.”

Genest has no trouble naming off initiatives that also testify to the power of pride. In Kamouraska, the owners of the Côté Est café-bistro rent the ground floor of the local presbytery for their restaurant.

While the church administration still owns the building, the rental income pays for the upkeep of both the presbytery and the church itself, all while offering a unique location for a local business. 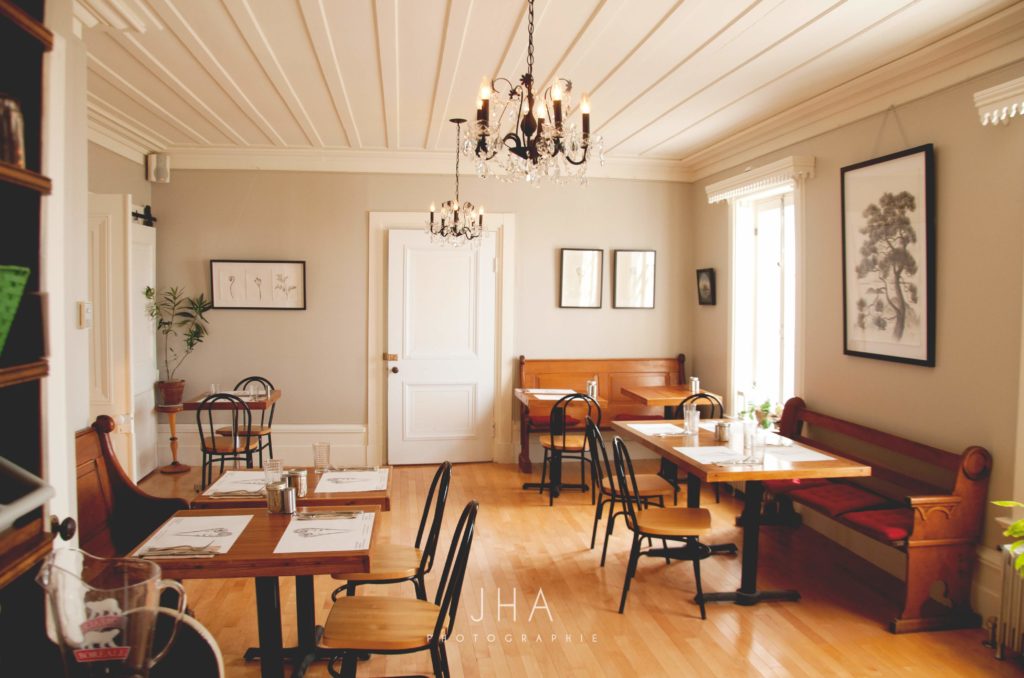 The Côté Est café-bistro is located in the Kamouraska presbytery; it thus enjoys a remarkable decor, and contributes by its rent to the maintenance of the building and the church. Photo credit: JHAPhotographie

In another example, pressure from the citizens of L’Ancienne-Lorette, a suburb of Quebec City, recently saved the parish of Notre-Dame-de-l’Annonciation from certain doom. The City bowed to public pressure and withdrew their plans to demolish the historic downtown building and replace it with a new retail development.

Instead, the City restored the presbytery and built a brand-new contemporary building alongside it.

Genest also points to the citizens of Deschambault-Grondines in Portneuf as a shining example of a community fully committed to heritage preservation.

“They embraced their heritage and tourism in the region skyrocketed!”

“It is extremely rare for elected municipal officials to express bad faith or speak out against heritage, but there are a lot of misconceptions about its value,” says Genest. It is much more tempting to choose the immediate income stream that comes with new real estate developments.

Thankfully, according to Dumais, another argument in favour of restoring downtown spaces is that the resulting property assessments have been proven more valuable to municipalities than new subdivisions.

She also strongly believes that maintaining and preserving heritage buildings is more sustainable than construction from scratch.

So, while the concept of “heritage” is indeed gaining ground, we must first be able to recognize it and acknowledge its value.

To do that effectively, it always comes back to the same thing: protecting heritage is all about building pride through education.

Mickaël Bergeron is a freelance journalist.