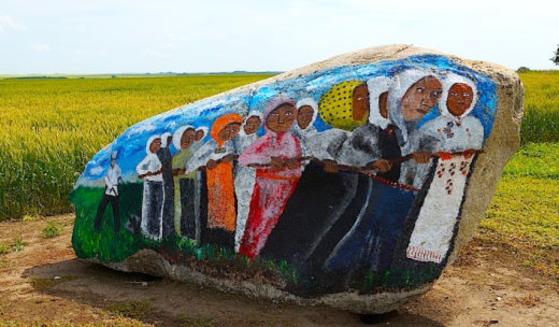 Four days each July, dozens of Canadians gather by a cave at the side of the North Saskatchewan River. Donning 19th century Russian dress, they sing, pull plows and bake bread, bringing to life the spirit of their ancestors who immigrated to the area 120 years ago. Here, at the Doukhobor Dugout National Historic Site, they’re re-enacting the lives of the Doukhobors, a religious sect that settled the Canadian Prairies after facing religious persecution in Russia. For Brenda Cheveldayoff, it’s more than history – it’s a family legacy.

“It was my dad’s dream to be able to have this place recognized nationally. His dream turned into my dream,” said Cheveldayoff. “To share what the Doukhobors overcame 120 years ago just feels incredible.”

Cheveldayoff, who now owns the site, is the great-granddaughter of Iakov Fedor Popoff, a Doukhobor who emigrated to the Canadian prairies with 7,500 others in 1899. With limited building materials, the Doukhobors took advantage of the ravine and excavated a hollow into the slope, enclosing it with three walls made of logs and a sod roof.  As an 11-year old orphan, Cheveldayoff’s grandfather lived in the 436-square-foot house – now known as the Doukhobor Dugout – with nine other families for five years while more permanent structures could be built.

“Today, people live in 5,000-square-foot structures shared between two people,” says Cheveldayoff. “Looking at the 425-square-foot, nine-family dugout house… the reality of what they faced really hits home. To still have those structures over a century later is unbelievable.”

Now, Cheveldayoff makes use of each Saturday in July to host thousands of visitors and tell the Doukhobor story through “interactive tourism.” At the site, she encourages visitors to get involved, having them work the field, wash clothes in the river and eat bread baked in the traditional Doukhobor style. She says that having visitors haul a plow through the dirt, as the Doukhobor women did, is an effective tool for teaching them about the sect’s struggles in the early years.

“Puling that plow – it makes it real,” said Cheveldayoff. “Coming to Canada, living in the sides of the hills, and trying to put together makeshift shelters – it was pretty brutal for them.”

Today, visitors to the site, which includes the dugout house ruins, several outbuildings and archeological remains, might witness War and Peace author Leo Tolstoy singing traditional Doukhobor songs, or period-clad women pulling a plow in the fields. These characters are played by modern-day Doukhobor descendants – a demographic today numbering an estimated 30,000 in Canada – who act out and educate visitors about important figures in their history and the traditions of their ancestors, including communal living, vegetarianism and abstinence from alcohol.

“It’s like walking into 1899,” said Brenda. Typical educational tools, like text, audio recordings and screens, didn’t do the history justice, she says. “We’re all in costume and in character – it’s a much more interesting way to engage visitors.”

The site was designated a Provincial Heritage Site in 2005 and National Historic Site three years later, recognized as the only known surviving example of this form of temporary shelter in Canada. The site recalls the hardships faced by many settlers of various ethnic backgrounds upon their arrival on the Prairies, and the practical solutions they adopted in settings largely devoid of trees.

The site, will next be open to visitors for Canada Historic Places Day 2020. National Trust Members receive free entry to this Passport Place. 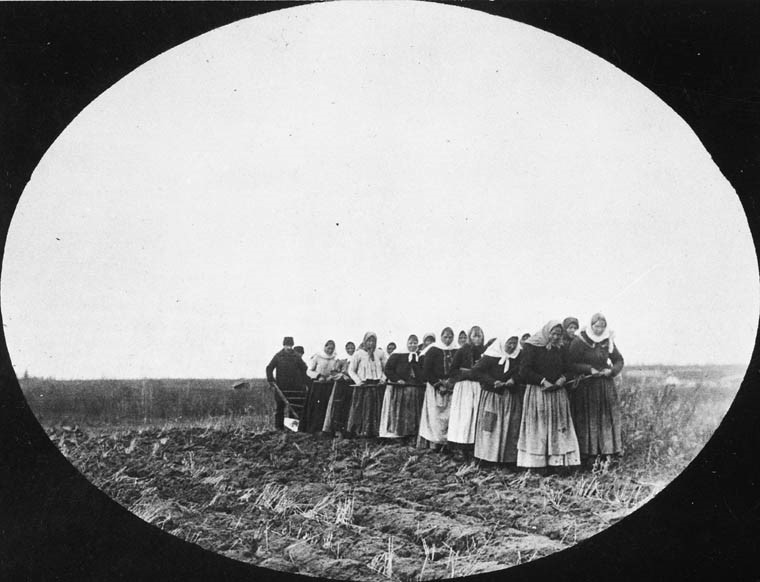