Nestled right downtown, it’s located at 285 Spadina Ave. less than a block from Casa Loma. Built in 1866 by the affluent Austin family, the Spadina Museum consists of a large three-storey house, as well as a two-storey garage and chauffer’s residence built in 1909; a stable/gardener’s cottage circa 1850; and a greenhouse built in 1913.

Toronto History Museums, who operate the Spadina Museum, is hosting a ground-breaking exhibition entitled “Dis/Mantle.” This art exhibition was inspired by the efforts of Black abolitionists and reimagines Spadina Museum through an Afrofuturism narrative.

The art exhibit explores an alternate reality where Louisa Pipkin, a freedom seeker who escaped enslavement in the US and a former laundress at the house in the 1870s, is now the homeowner. In this reality, Spadina House is a safe haven for those seeking freedom through the Underground Railroad. The group show includes soundscapes, ceramics, and visual art from Canadian artists from the Afro-Caribbean diaspora, including an iconic portrait of Mrs. Pipkin and a series of new portraits of members of the Black community by lead artist Gordon Shadrach. Shadrach chose Pipkin as his main character because there was a portrait of Pipkin in the house. It was the only portrait of a person of colour that the Austins commissioned.

“Because there’s so little known about her [Pipkin] she becomes this pivotal character because she was represented at a time when you didn’t see many Black people and certainly not someone who would be considered a servant. There’s a lot of mystery around her. We wanted to anchor this story in something that was real but we still had the freedom to use our imaginations and create something…We were able to try to create some sense of humanity around what Black people were experiencing at the time. But also looking at it with a lens of Afrofuturistic perspective where it becomes a “what if,” says Shadrach. You can hear more from Gordon Shadrach on CBC Listen, Metro Morning from August 5, 2022. Listen here 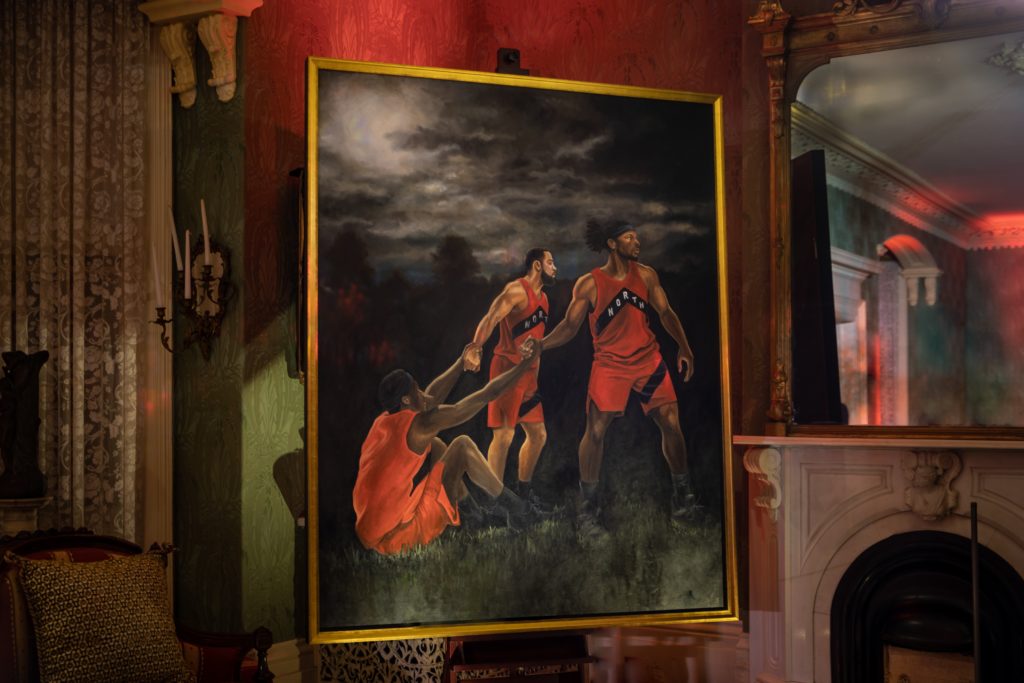 Shadrach has been living in the historic house since March, transforming a room on the third floor into a residency studio. He has painted six portraits of Raptors, Achiuwa, and others of Toronto’s basketball team, re-imagining them as abolitionists, community leaders, and descendants of Mrs. Pipkin. Through the medium of portraiture, Shadrach seeks to disrupt colonial constrictions by inviting viewers to reflect upon the depiction of Black people in art and culture.

The Dis/Mantle art exhibition is part of the award-winning Awakening Program by the Toronto History Museums, a series of art projects created by Black, Indigenous, artist of colour, and the 2SLGBTQ+ community, operating under the principles of anti-oppression, anti-colonialism, and anti-racism.

The Dis/Mantle art exhibition opened on August 5 and runs until December 31, 2022.