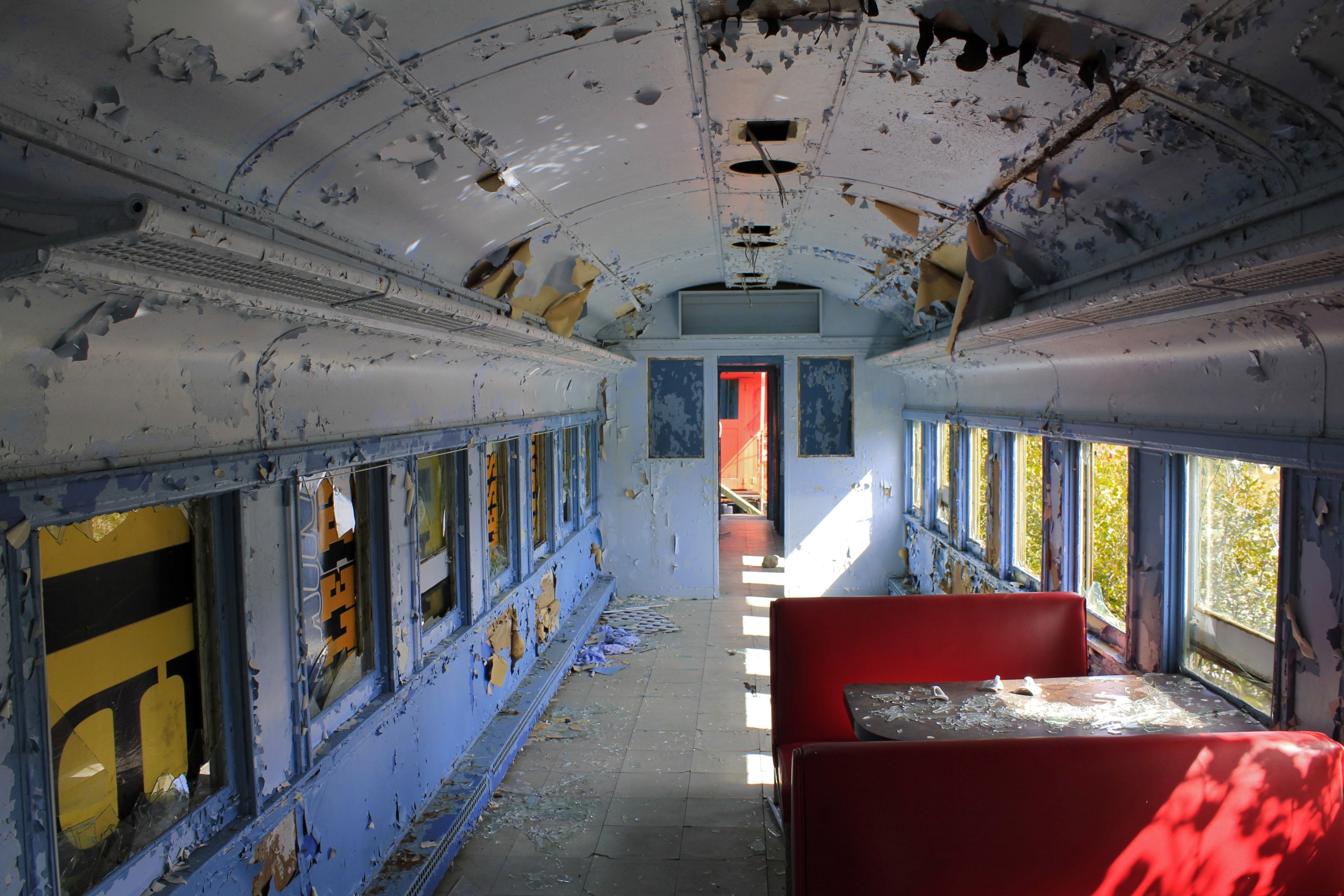 Decoding the Decrepit: Seeing the Value in Abandoned Places

The amusement park closed for good over a decade ago, yet visitors flock to its steel skeletons every night.  Trinity Loop, a once-vibrant theme park in eastern Newfoundland, is now nothing more than the warped remains of a ferris wheel and a crumbling railway line, complete with rusted train cars covered in graffiti.

People are attracted to Trinity Loop and other abandoned sites like the peeling and vacant Riverview Hospital in British Columbia, the now-defunct Pinawa Generating Station outside Winnipeg or the scuttled boats, half-submerged and covered in lichen punctuating the Maritime coasts­.

This particular genre of architectural fandom is appreciated by many. On Instagram, the tags #abandoned and #abandonedplaces have together been used 10 million times. One author even invented a word for the particular sensation they evoke: “Kenopsia,” defined by John Koenig in his Dictionary of Obscure Sorrows, is “the eerie, forlorn atmosphere of a place that’s usually bustling with people but is now abandoned and quiet.”

Society’s fascination with decay is not new. Sites like Pompeii and Herculaneum have long drawn tourists. Connoisseurs of early 19th century English landscape architecture will recognize the Romantic ruin – made palpable with Faux-Roman and Gothic garden follies – as a popular tool for recalling the past.

In addition to the aesthetic of these buildings (especially appreciated by urban explorers and photographers), abandoned places hold value as they can teach us lessons about our society’s development, impact on the environment and changing technology.

However, these abandoned buildings also present more tangible opportunities for growth. In addition to prompting tourism, the regeneration of these places can lead to increased economic traffic in a region, present opportunities for small businesses and entrepreneurs to set up shop, and provide much-needed residences in some of Canada’s most packed cores. 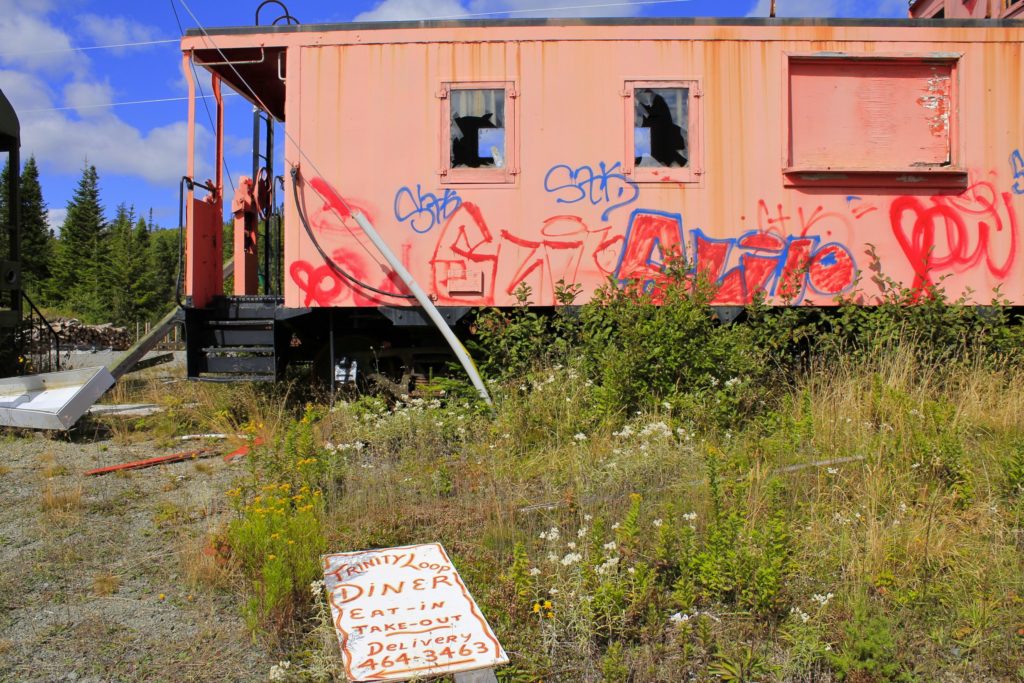 Of buildings left as ruins, there are many. Trinity Loop is not alone: Hundreds of decommissioned and decaying sites dot Canada’s landscape. Their power resides in the feelings they evoke in us. Often eerily prophetic, they spur in us a pleasurable melancholy.

There is, undeniably, a haunting beauty in these places. Ruined cathedrals overtaken by nature bring fantasy to life. Solemn objects left behind tell the stories of people who left and inexplicably never returned. Exploring them is practically voyeuristic – like stepping into a place one probably should not be.

Some ruins are preserved as such, like St. Raphael’s Ruins in Cornwall, Ontario or the Carbide Willson ruins in Chelsea, Quebec, and continue to have a life of their own. Others, left to decay, can inspire our progression towards a more sustainable future. As the world hurtles towards an uncertain future, abandoned places can inspire our nostalgia about the days of the past, where the Earth’s population was, perhaps, not yet concerned with climate change or nuclear threats.

They’re the memento mori of our built environment, according to Dylan Thuras, co-founder of American travel company Atlas Obscura. Thuras is well versed in the draw of the decaying: the company’s website lists hundreds of abandoned places among over 18,000 unusual attractions worldwide, including several dozen in Canada.

“These places give you a sense of perspective, and force you to acknowledge that all human effort ultimately comes to naught,” says Thuras. “The acknowledgement of your own depleting existence is connected to the knowledge of the fleeting existence of things much larger than you.”

Tong Lam, a scholar at the University of Toronto, has explored this in his book, Abandoned Futures. In it, he points out that abandoned places reflect and embody larger issues and trends. One such place he describes is the archetypical abandoned car graveyard, left to decay in the once-thriving Rust Belt south of the border. “These ruins suggest that there’s a limit to our power,” says Lam. “We believe we can create anything and conquer nature, and we couldn’t. That’s terrifying.”

In addition to the existential lessons we gain from abandoned places, we can also gain value through these sites as opportunities for rehabilitation. Abandoned places, often in rural or hard-to-reach places, can be a boon to the communities in which they are located.

Such a project has been undertaken in Carcross, Yukon. In 2006, Anne Morgan and Jamie Toole purchased and began renovations on the Caribou Hotel. The 19th century inn was once owned by Dawson Charlie, credited as a co-discoverer of the gold find that began the Klondike Gold Rush. It sat derelict and vacant for 15 years before they purchased it. According to Morgan, the building would have been on the ground by now if they hadn’t stepped in.

“It was in pretty rough shape when we got it,” she said. “The foundation was crumbling. You could put your first through the back wall or fall through the floor or the balcony.” 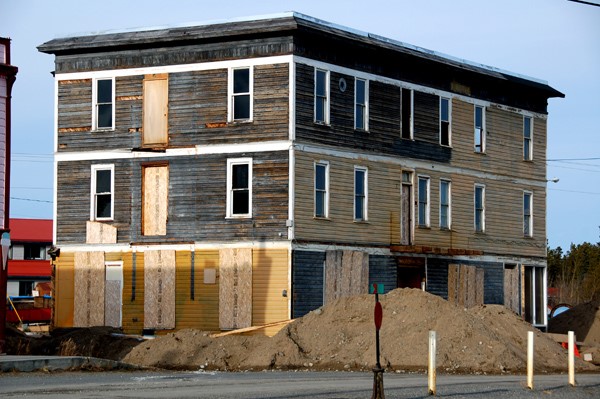 The Caribou Hotel had been abandoned for years before new owners began renovations. Photo by Anne Morgan.

The pair reopened the building’s saloon, complete with original piano, in August of 2019. This comes in addition to the sourdough bakery and cabins they had previously finished, and will be followed by the reopening of 11 guest rooms in two years. The pair has clear goals for extending the building’s impact into the community.

“Tourism has definitely been picking up.” Morgan says. “And it’s so rewarding to see the community sitting in the saloon, having a drink. In a way, it feels like the community owns it.”

In addition to the well-known environmental impact of adaptive reuse, these rebuilds can prove to be financially valuable, says Nancy Oakley, a heritage consultant and former Director of Eduation at Willowbank School of Restoration Arts.

“The economic impact of these sorts of projects – the multiplier effect that they have ­on the local community, in addition to the social benefit – is not necessarily something you’re going to get on a new development.”

According to Oakley, the biggest challenge when it comes to these spaces is the perception surrounding them. Conservationists tend to be optimists, she says, but some people will only see the boarded-up, derelict building left to ruin. “That abandoned farm could be a home for a family. That boarded up business could become a space for an entrepreneur.”

The combination of these two ideas – that of ruins for ruin’s sake, and as the potential sites of future reuse – has been embodied in a recent virtual reality experience created by the work of Anishinaabe artist Lisa Jackson. Biidaaban: First Light, an interactive VR time-jump rooted in the realm of Indigenous futurism, allows viewers to jump into the flooded downtown Toronto of tomorrow. This interactive landscape depicts future Torontonians connecting with the land – commuting via canoe and growing gardens on skyscraper roofs. In it, the ruins of the city act as a set for social rebirth. 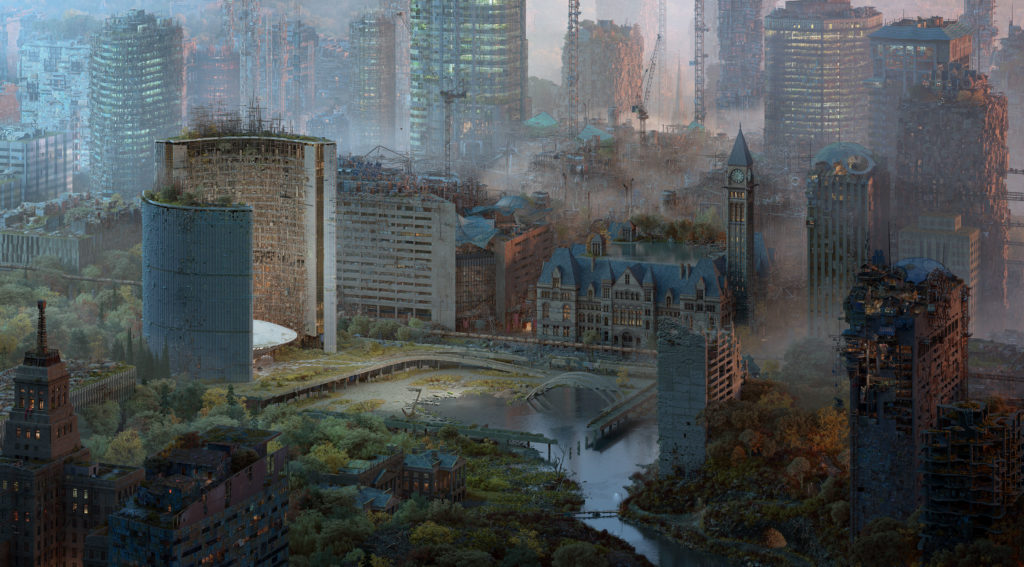 In real life, too, these sites of abandon have taken on new lives. Trinity Loop’s recent rise to popularity is a testament to this: from the rusty ruins comes a new opportunity for the community, now benefitting from the tourism the site has drawn. Like the climbs and falls of a roller coaster, abandoned places may fall off the grid and be forgotten or they may garner attention from the beauty in their decay. They may also play host to vibrancy and new life as a place reborn further adding to the layered history of place.