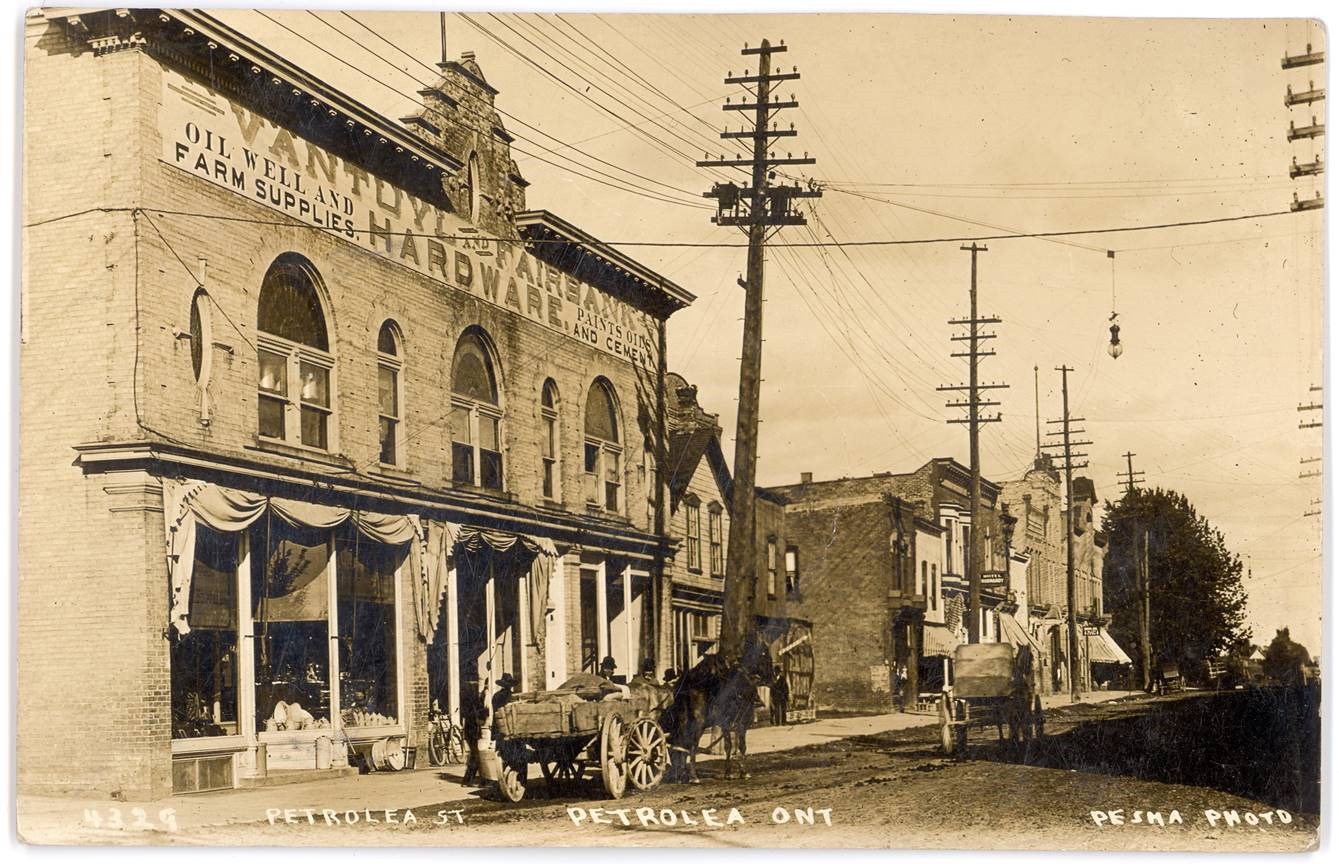 Petrolia, Ontario is famous for its place in the story of oil. The oil boom hit the place like a thunderclap in 1866, and with the boom came world fame for the small town.

Late last year, Petrolia made the national news again, when a hardware store that had opened the year before the boom finally closed its doors after 154 years in operation.

Canada’s oldest family-owned hardware store, the VanTuyl and Fairbank Heavy Hardware opened in Petrolia in 1865 and offered a rare glimpse of the town’s history as Canada’s first oil capital. 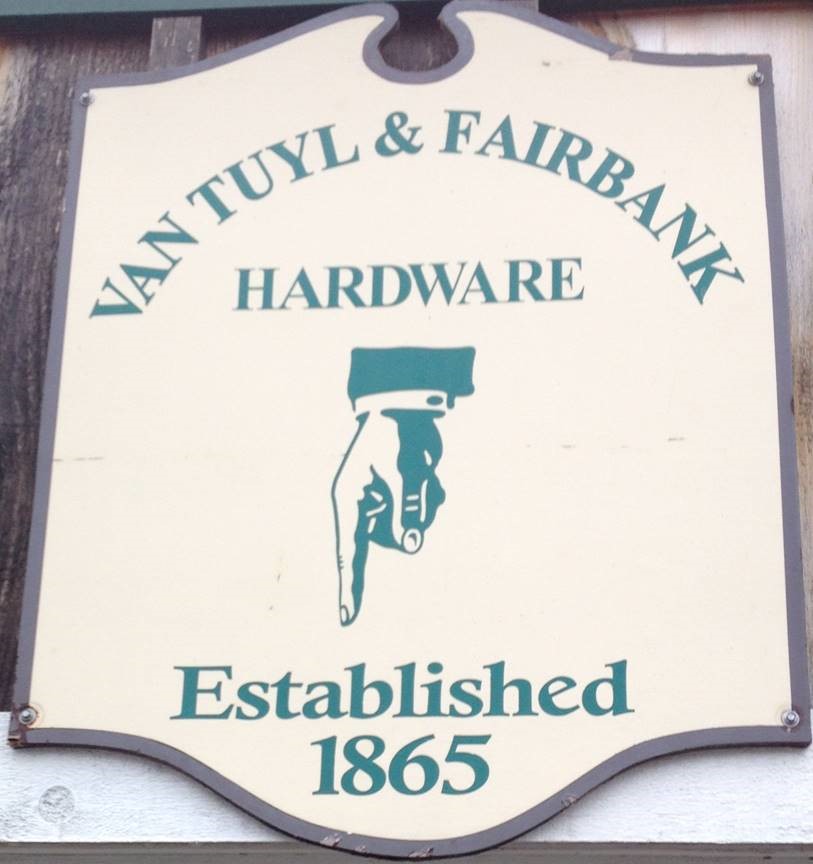 Petrolia, 25 km east of Sarnia, supplied 90 percent of Canada’s oil needs up to the 1900s. In Victorian days, VanTuyl and Fairbank grew to be the largest hardware store west of Toronto. The store’s ownership passed from father to son three times in the family and since 1982, it had been owned by the founder’s great-grandson, Charlie Fairbank.

“When it opened before Confederation, this area was known as Canada West. It has withstood the fear of Fenian raids, diminishing oil, two world wars, the Great Depression, fires, floods and new technology,” said Fairbank. 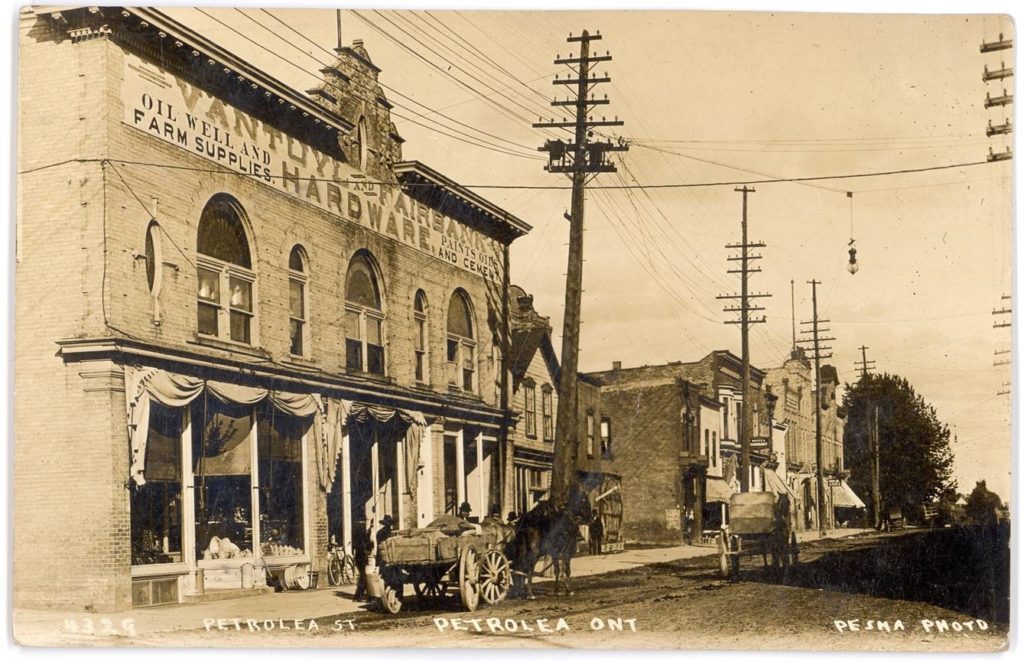 VanTuyl and Fairbank Hardware circa 1905 when it was the largest hardware store west of Toronto. Photo credit: Lambton County Archives photo

When John Henry Fairbank established the store in the fall of 1865 to supply his oil wells, Petrolia was not a village yet, and Ontario was known as Canada West. People were still reeling from the shock of Abraham Lincoln’s assassination in the spring, and it would be two years before John A. Macdonald became Canada’s first prime minister.

Petrolia was born in a fevered frenzy for oil in the 1860s. Thousands of men, many of them Americans looking for opportunities after the American Civil War, flooded this “howling wilderness” in their quest for oil.

Petrolia’s boom proved to be unlike the earlier one in nearby Oil Springs. That boom, from 1858 to 1866, was like a raging paper fire that quickly flamed out. In Petrolia, the prolific King Wells kickstarted the oil rush in 1866. This led to rail and more oil discoveries. By 1884, Imperial Oil established its headquarters, refinery and barrel plant in town, sprawling over 50 acres. The boom stretched for more than three decades, making Petrolia the oil capital of Canada. And it was not just the vast quantities of oil, it was the ingenious technology the men developed and the expertise they took to open oil wells in 86 countries between 1873 and 1945. Petrolia produced large amounts of chemicals, boilers, stills, brass goods, and hand-forged driller tools that were shipped to all corners of the globe as coal was eclipsed by oil.

And through it all, there was the Fairbank hardware store. It had three earlier names but took its current name in 1874 when a transplanted American, the gifted Maj. Benjamin VanTuyl, became manager. The store moved several times within the town and from the 1880s to the 1930s, it had satellite stores in nearby oil communities of Oil Springs and Bothwell.

Change has been constant. In the heady Victorian days, it carried everything from glove and shoe hooks, sterling silver flatware and cigar cutters to horse-drawn carriages, cast iron stoves, valves, pipe and well fittings. Much was easily loaded from the adjacent train tracks, and a team of tinsmiths made every kind of milk pail. Horseshoeing was a specialty, as was the Fairbank fire extinguisher used in every building in town.

Even before the crash of 1929, the Fairbank family’s revenues were drying up as the oil slowed to a trickle and other financial woes hit hard. The family sold the store’s grand Victorian building on the main street that year. They reduced the store to its three freight sheds brought together under one roof, and streamlined the goods, carrying only heavy hardware. Through the Depression, the store limped along. Foreseeing drastic shortages coming in WWII, Charlie Fairbank’s father took pride in successfully stocking a healthy supply of steel.

When Charlie took ownership in 1982, the store’s big black account books looked like they belonged in a Dickens novel. He later added ads from the 1800s and early 1900s adorned the walls, beams that still had the bark on them supported part of the roof, and among the displays were the 1904 Fairbank fire extinguisher, a 1916 brass cash register, the iron hand-crafted claw to scoop nails, and an art display of solar-powered stained glass windows. The office floor was worn through by boot traffic. One office door was a scant two-feet wide. The roof of the board and batten building was topped with a horse-drawn wagon with life-sized metal sculptures of a man and horse. 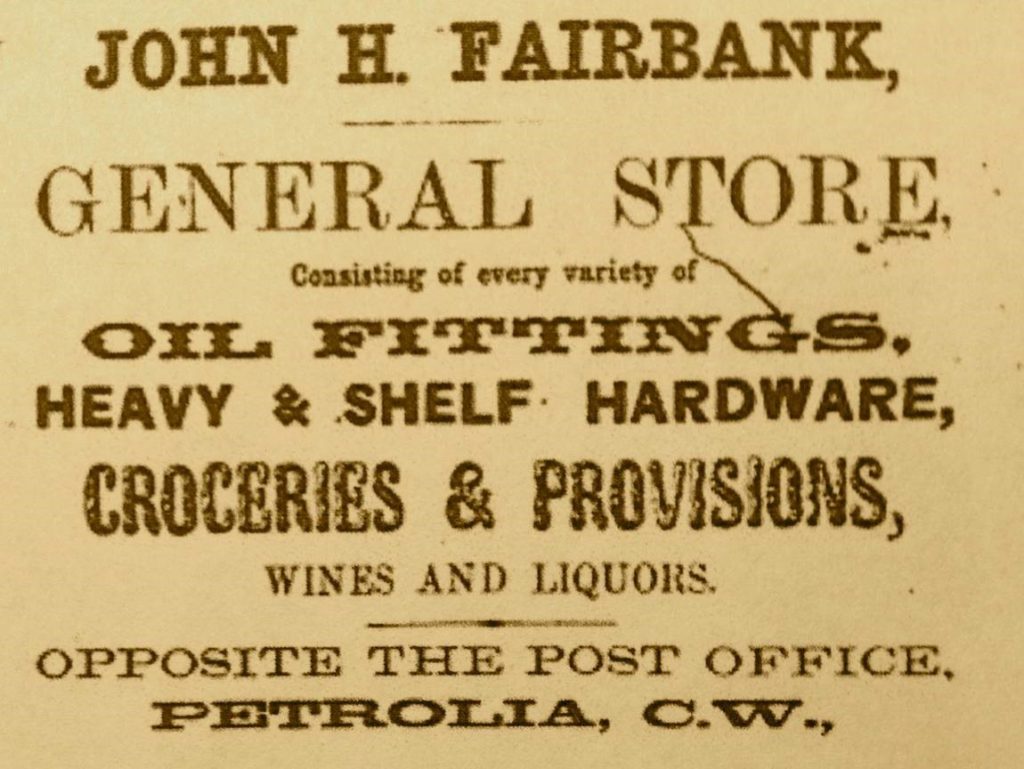 This ad appeared in 1866, one year before Confederation and this part of Ontario was called Canada West. Photo credit: Fairbank.

In 2001, the store hired its very first female manager, Theresa MacDonald. She is credited with bringing the store into the new millennium: vastly improving computer systems; creating a website; upgrading the building; overseeing the first maternity leave; ushering in solarware; installing photovoltaic collectors on the roof; and introducing Christmas bowling parties.

In 2015, a crowd of 500 took guided tours of the half-acre store as it celebrated its 150th anniversary. When Theresa MacDonald retired after 18 years managing the store, Charlie made the tough decision to close the doors.

“This store has remained open through 23 prime ministers,” says Charlie. “The question should not be why are we closing, but how we successfully managed to do business for 154 years.”

The VanTuyl and Fairbank logo from 1924 and earlier decades depicts a man transporting oil barrels on a horse-drawn wagon. Photo credit: Fairbank.

The store always served as a microcosm of the town and the times. The closing is not the end of an era, but many eras. However, the significance of the oil discovery at the heart of the store’s founding is far from over: The Oil Museum of Canada and Fairbank Oil Fields share the Oil Springs National Historic Site designation that recognizes the significance of the Williams’ well and the Shaw Gusher, the first oil gusher in Canada. In 2010, the Oil Museum of Canada collaborated with community and planning stakeholders to achieve the designation of Ontario’s first Industrial Heritage Conservation District, and the Oil Museum of Canada along with Fairbank Oil Fields is now seeking UNESCO World Heritage Designation. In May 2021, Fairbank Oil will host an important meeting of The International Committee for the Conservation of the Industrial Heritage (TICCIH), and share a new thematic study into the industrial heritage of petroleum production. The study puts forward criteria to help identify and evaluate the legacy of oil production. In this way, it will provide guidance to identify the most significant historic infrastructure around the world, as well as sites which are representative or characteristic of different phases of the oil industry.

The Oil Museum of Canada is part of our Passport Places program, a National Trust for Canada membership benefit where members get complimentary access to these beautiful places, as well as 1000+ National Trust Places abroad.
Become a member today!

Author, The Story of Fairbank Oil, Four Generations of the Family Producing Oil Longer Than Anyone in the World.