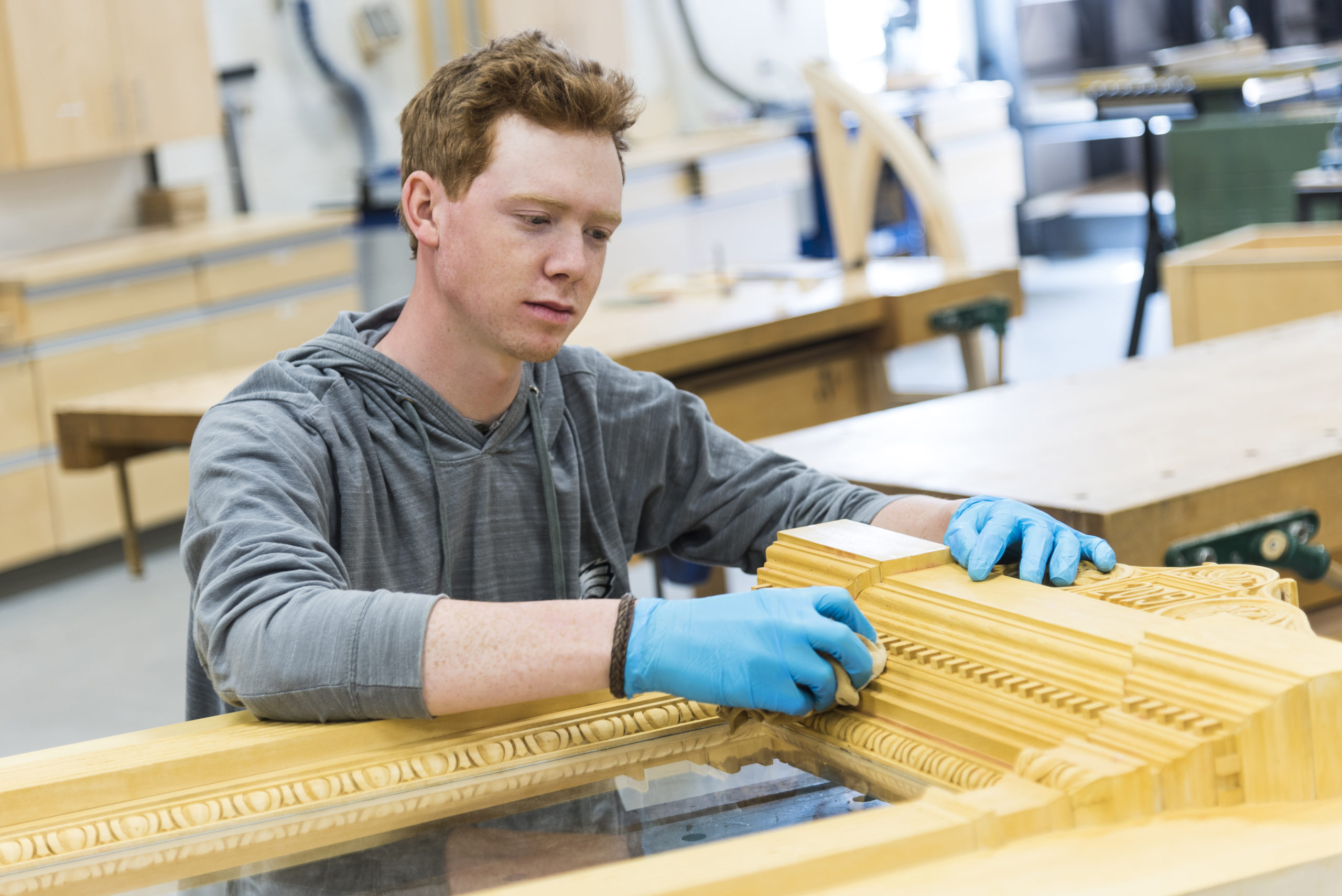 Successful conservation projects in Canada depend on the skilled craftspeople of the heritage trades. Historic places can’t survive without the specialized masons, carpenters, blacksmiths, plasterers, roofers and other trades that bring a deep understanding of historic materials, how they were traditionally assembled, how they deteriorate over time, and how to best conserve them.

“Every small town across the country should have access to a skilled heritage mason, carpenter, blacksmith and roofer”, says Bobby Watt, President of RJW Stonemasonry. But that is far from the reality, and heritage trades are at risk across the country. The loss of the heritage trades would be tragic, both for the rich collective experience and traditions they hold, but also for the impact on our ability to properly care for our historic buildings.

Having worked for decades alongside the other trades, Watt has advocated for more training programs to increase the supply of craftspeople. But the demand for those services are stifled by government contracting practices that often do not allow heritage trades to be required since they lack formal accreditation, and that often require contractors to hold large insurance bonds that are beyond the reach of most small heritage contractors. There is also a common perception that specialized trades are too costly, or not necessary. From what he sees, Watt believes that “most homeowners and commercial property owners make their decision based on low cost in the short term, not the long-term financial benefits of maintaining historic materials appropriately”.

While funding for conservation projects is typically sporadic at best, government can play a leadership role in supporting the training of new heritage craftspeople. As part of his work on the $863 million dollar rehabilitation of the West Block on Parliament Hill in Ottawa in 2011-2018, Watt was able to train over 80 masonry apprentices, including 18 women. The scale of the project allowed for this unique training opportunity. The client (Public Works and Government Services Canada) agreed to impose this requirement on the project’s prime contractor, and Human Resources Skills Development Canada also supported the initiative by supplementing the apprentices’ salary, providing grants for the purchase of tools and offering a tax rebate for the company to offset some of the cost of this training. All this was also supported by the union local, which eventually got new, highly qualified members who will continue to be employed by the major projects planned on Parliament Hill in the coming years.

Parks Canada has also been pro-active in its mandate to support heritage conservation by integrating trades students in their own projects. In Charlottetown PEI, the major project to conserve the historic wood windows of Province House National Historic Site has benefited from the involvement of students from Holland College, which has a memorandum of understanding with Parks Canada. Josh Silver, Learning Manager of the Heritage Retrofit Carpentry program, says that the relationship with Parks Canada provides a living laboratory for his students. “The students not only get the amazing opportunity to work on these historic windows,” says Silver, “They also get real-life experience working onsite with all the other trades.” It is that kind of tangible experience that explains why 100% of their graduates find jobs right away – and why the popular program is oversubscribed every year. 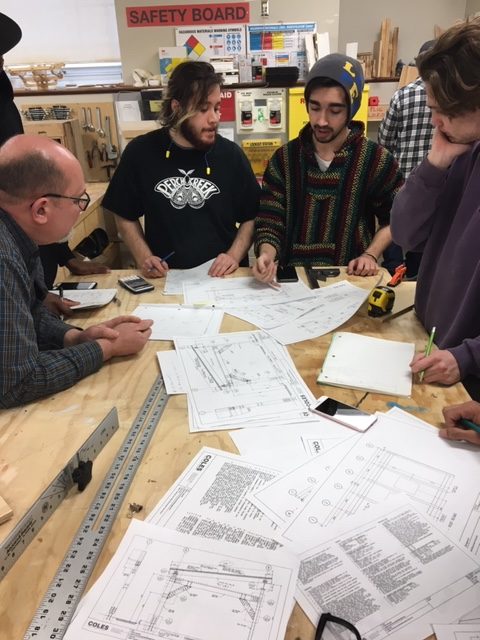 Specialized carpentry programs are oversubscribed at Holland College. So is the Heritage Carpentry and Joinery program of Algonquin College’s campus in Perth ON, which has attracted hundreds of students and graduated over 750 in its 30-year history. Christopher Hahn, the Dean of the campus, is adding a third cohort of students this fall to meet the demand for heritage carpenters, and the campus is offering a new 6-month pre-apprenticeship masonry program that also covers traditional techniques. Like the PEI program, Hahn’s has benefited from a good relationship with government, public agencies, and stakeholders to provide his students with on-site training opportunities. Enrollment in these programs is also buoyed by a younger generation attracted to fulfilling careers that contribute to a more sustainable future. In addition to these college programs, less formal training courses are also becoming popular with a people interested in learning the ‘building arts’ of blacksmithing, plaster restoration, or traditional paint systems.

Both Hahn and Silver agree that there are still hurdles to overcome. Without any nationally accepted standards for their heritage craft training programs or a formal certification process for their graduates, it is hard to build recognition for heritage trades, or have government contracting authorities specify heritage trade requirements. The Canadian Association of Heritage Professionals (CAHP) does recognize the heritage trades as professional members, following a peer-reviewed assessment of level of experience and adherence to a Code of Ethics. But the CAHP designation of an individual does not carry the same status that would come from a heritage endorsement added to their Red Seal certificate. The Red Seal program, administered by the Canadian Council of Directors of Apprenticeship, does not recognize the heritage trades as a distinct specialization.

“There is a fundamental disconnect in the education programs in Canada that train all the trades and even architects”, says Sue Schappert, past president of CAHP. “With the exception of a small number of programs specializing in heritage, they are overwhelmingly premised on new construction.” This doesn’t reflect the reality of the construction industry in Canada, where the number of building permits issued across the country for alterations / improvements to existing buildings is two to three times greater than all the permits issued for new construction (residential and non-residential combined).

That being said, many specialized conservation firms regularly collaborate with highly skilled craftspeople to deliver sound heritage projects. John Diodati, Director at EVOQ Architects in Montreal, says that his firm regularly involves trusted craftspeople as consultants at the very beginning of a project. “Many of the heritage trades are small, hands-on craftspeople that do not necessarily have the administrative and regulatory infrastructure such as bonding that would allow them to work on larger projects,” says Diodati. “However, their small size also means we can develop longstanding personal working relationships with them. Their specialized knowledge and practical approach to problem-solving has been helpful for us to develop and test repair options prior to implementation.” It’s also worth noting that the specialized trades in Quebec may benefit from a greater demand thanks to more robust government funding for heritage projects, and to the annual Rendez-vous Maestria in Montreal – a two-day event that seeks to strengthen and promote the heritage trades. Organized by the Conseil des métiers d’arts du Québec (the professional association that represents all types of visual artists and craftspeople), and targeted to both the building industry and the general public, the Rendez-vous Maestria showcases the value of heritage crafts in conference sessions and a large trade show.

But finding that expertise in other parts of the country can be a challenge. Donald Luxton, Principal of Donald Luxton & Associates based in Vancouver, BC, has sometimes had a hard time getting qualified contractors to bid on his projects. “We do have some great contractors with the right skills, but there are too few and they can be too busy to take on new work,” he says. And the situation is much more difficult for his projects in the Western provinces. Luxton believes a big part of the problem is the lack of financial incentives from governments to encourage owners to invest in the conservation of their buildings. “Without federal tax incentives and with the end of provincial Main Street programs, there is little to help persuade owners and increase the demand for heritage trades”. 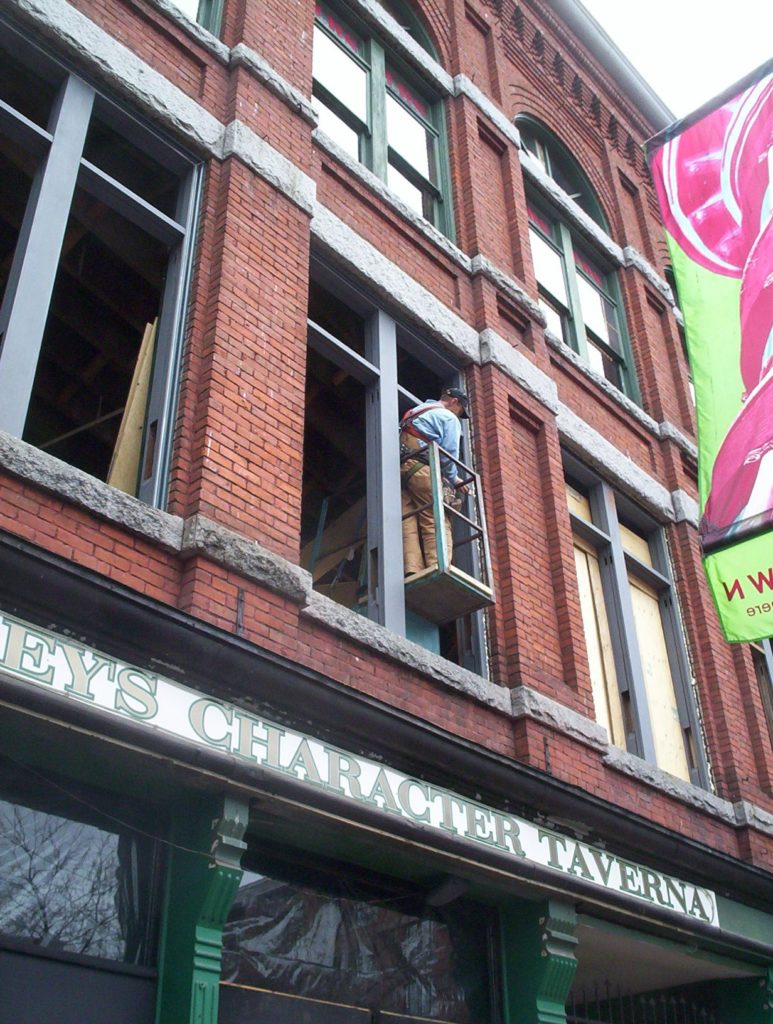 Skilled tradespeople are critical to the success of a building rehabilitation project. Here heritage carpenters restore the wood windows at the Dunn Block in Vancouver, BC. Photo credit: Vintage Woodwork.

As this story goes to press, COVID-19 is taking a toll on the construction industry and the heritage sector, and the long-term economic impact on the heritage trades is difficult to assess. In the coming months it will be critical for the heritage sector to advocate collectively for economic recovery strategies and stimulus investments that capitalize on the potential to create new green jobs through heritage rehabilitation and adaptive reuse of buildings. The heritage trades will be central in that work.

Banner photo: Students at Algonquin College’s Heritage Carpentry and Joinery program in Perth, ON not only learn how to conserve historic woodwork, but also, as seen in this photo, how to reproduce traditional mouldings and millwork. Photo credit: Algonquin College.