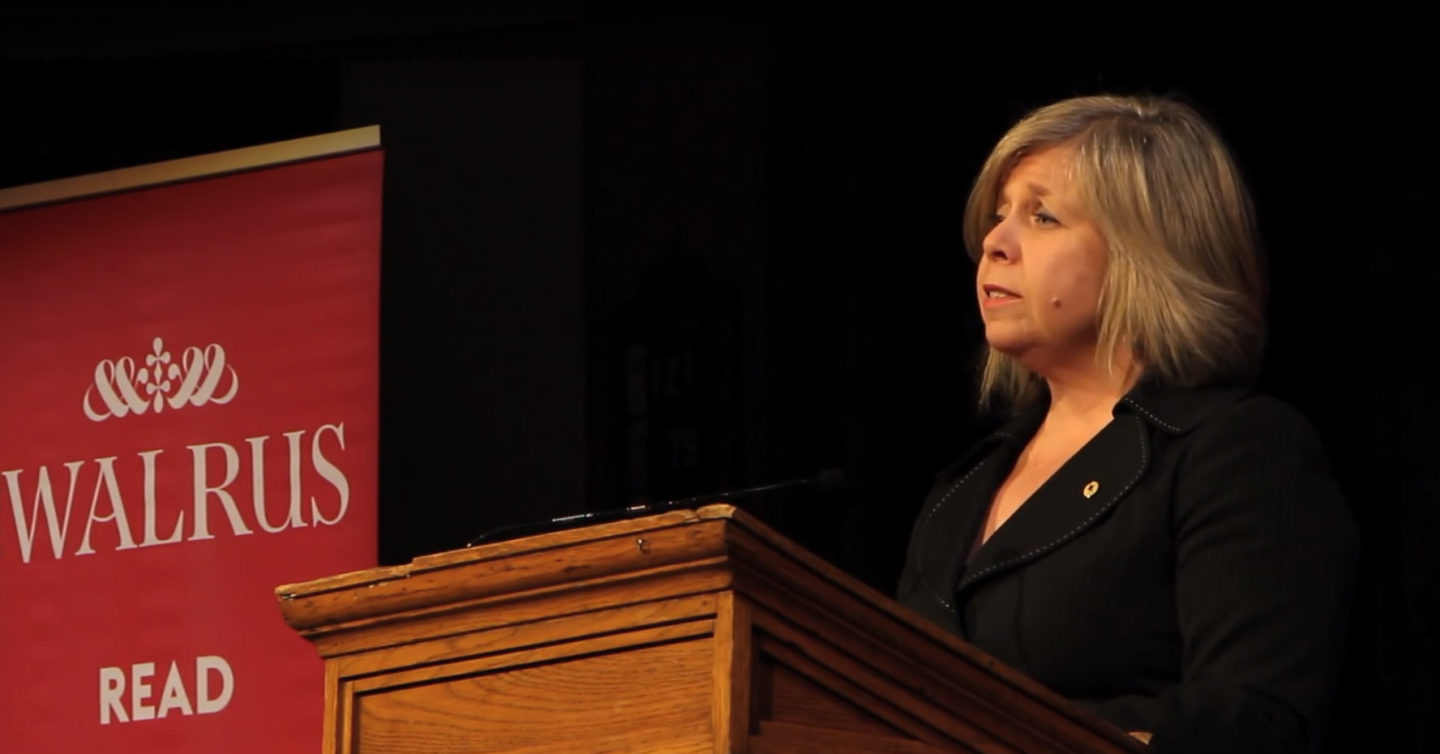 A Hope and a Prayer for Places of Faith

The following is a transcript of Natalie Bull’s speech at the Walrus Talks Spirituality, presented by the Walrus and the United Church Observer earlier this month.

Good evening. My name is Natalie Bull. I am Executive Director of the National Trust for Canada. The National Trust is a charity that works with communities to save places that matter, and “spirit of place” is something we talk about a lot. I would say that “spirit of place” is front and centre in sacred architecture and places of faith, whether they are gorgeous, elaborate Romanesque Revival piles like this one, or mosques, or synagogues or the little white churches that I know from growing up in New Brunswick’s bible belt. Most sacred architecture is a deliberate physical expression of the spiritual. Sometimes the very form of the building itself is a metaphor for the spiritual relationship, designed to move us, or still us or fill us with awe. Even if you never darken the door, I would bet that you consider the places of faith in your neighborhood to be prominent cultural, social and even spiritual landmarks. But many thousands of these buildings are doomed. Society is changing. Aging congregations, dwindling dollars in the collection plate and different ideas about spirituality and worship are taking their toll.

In urban centers, tiny congregations with massive properties are understandably tempted by development potential. Ottawa’s Beth Shalom synagogue was reportedly losing $200,000 a year when they finally sold their building to a developer for $15 million. Here in Toronto, Willoughby Baptist and St Jude’s Anglican, both demolished to build condos. Riverdale Presbyterian and Howard Park Pentecostal, converted to condos. Deer Park United nearby is slated to become a sort of preserved ruin for its surrounding condo development. Many more buildings have been lost, converted to new uses or are in play.

Quebec has been the canary in the coalmine, already far ahead of the rest of Canada in grappling with its massive collection of redundant religious buildings. The Province, recognizing the importance of these symbolic landmarks to cultural identity, has already invested almost $300 million in everything from roofs to stained glass to organs. But the pace of closure and conversion is staggering.

And the tsunami will only get bigger. Faith groups are the second largest real-estate holder in Canada, second only to the Government of Canada itself. We may be talking about more than 27,000 buildings, and it is expected that at least 30 percent of them will be on the chopping block in the next few years. So for heritage advocates, places of faith are front and center on our list of species at risk.

But is it any of our business? I’ve been told that heritage types should stay out of this crisis. That a preoccupation with saving a church building is a form of idol worship. That the church is really its people, not the building.

That makes sense on paper, but it really doesn’t square with the emotional turmoil that I see on the ground. I’ll give two examples. In Newfoundland, parishioners who were seeking heritage designation to protect the historic Church By the Sea awoke one morning to find that the steeple had been hacked off and pulled down under cover of darkness. After a long and acrimonious tug of war with church officials, they finally lost the rest of the building earlier this year. And in Victoria Mines, Cape Breton, locals are desperately fundraising against all odds to buy and repair their historic Stone Church rather than see it demolished.

More than just landmarks, these buildings carry family memories and meaning and enrich the spiritual experience. And they matter to more than just the faithful.  With their soup kitchens, homeless shelters and space for other charities and non-profits, places of faith are often invisible safety nets and de facto community centers.  In rural Canada, the church may be the only game in town.

As a heritage advocate, I see this broader social impact as an important asset, even a bargaining chip. And I’m not alone. Preservationists in the US have already developed a way to quantify the value that congregations and their buildings contribute to society.  The resulting dollar figure – aptly named the Halo effect – typically comes in at many millions of dollars for a single urban congregation. Because it helps tell a fulsome story of their value, it can provide congregations with a much more compelling case to attract funders and philanthropists.

So while shifting attitudes to spirituality may be a big factor putting these buildings at risk, a new take on their value to the wider community may offer a path their salvation, if you’ll pardon the pun. The Toronto Halo Project is now adapting the methodology for use in Canada. And there are already great examples out there. In fact, we are meeting in one!  I would say that the Halo Effect is alive and well here at Trinity-St Paul’s United Church and Centre for Faith, Justice and the Arts. Its upward spiral of financial sustainability and community service include a baroque orchestra, a Montessori school, a Middle Eastern Language school, a powerful activist agenda and much more.

Even when a congregation chooses to move on, sale and redevelopment don’t have to be a death knell. While condos and climbing gyms may offer an easier business model, what a blessing when a former place of faith can offer a sort of spirituality grounded in community service. Think community gardens, food hubs, farm markets, poverty alleviation, affordable housing and more, with or without a denominational label.

This reflection comes at a time when the field of heritage conservation itself is actively re-thinking its purpose, and returning to our roots as a social movement. I think heritage groups like mine can find new meaning in helping society come to terms with landmark faith buildings using heritage as a tool to strengthen community. And the National Trust is blessed with a wonderful partner for this challenge, the organization Faith and the Common Good, which brings essential expertise in mission renewal and sustainability.

All that being said, I am under no illusion that we can actually turn the tide. There are huge numbers of buildings involved, and a crippling burden of deferred maintenance. In some cases there are complex histories and the need for reconciliation.

But my hope is that faith groups and their communities – all of us – will simply do our very best to make wise use of these sacred spaces that we’ve inherited from the past. And my prayer is that wherever possible they will used in ways that help create resilient and sustainable communities with a powerful “spirit of place.”