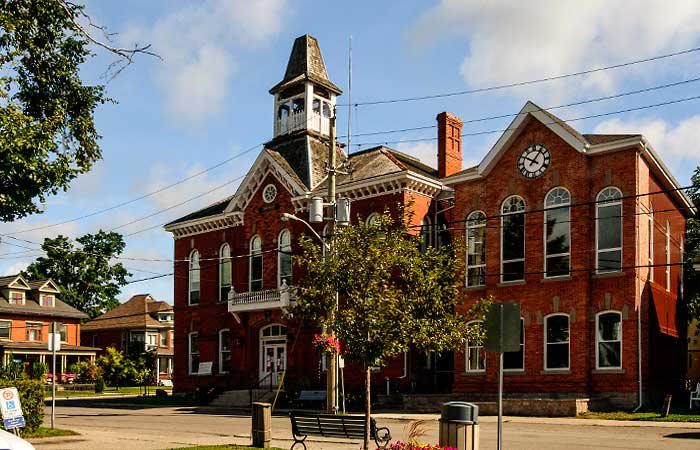 Rumour has it that one night, in 1945, Jimmy, the caretaker of the Town Hall in Acton, Ontario, woke up to the smell of smoke and the realization that the building was on fire. Quick-thinking, he rang the bell in the bell tower and sprang into action, swiftly determining the source and dousing it with his own one-man bucket brigade until the volunteer fire crew arrived.

In addition to housing the civic offices, a library, and a jail, the Acton Town Hall had always brought the community together for gatherings, dances, music, and school plays after it opened in 1883. Willow Hall, the main auditorium and stage, boasts a unique semi-suspended floor, making it the ideal surface for community dances. As the story unfolds, it seems that Jimmy wasn’t the only guardian angel. In 1974, when the municipal offices of Acton were moved to a neighbouring town and local leaders were advocating to tear it down to make way for parking, a group of volunteers swooped in to save it from the wrecking ball. The community rallied and purchased the building for $2 dollars, putting in motion decades of restoration and renewal. In 1982, the newly formed Heritage Acton community group raised over $1 million to restore the building. This included exterior brickwork, new interior wiring, a new heating system, and window replacement, as well as careful restoration of the interior plaster moldings that give Willow Hall its charm.

Now, old meets new. One of the original jail cells was transformed into a kitchen and the second remains in its original condition. In 2013, a new addition was added; it houses a second accessible entrance, a mezzanine, and a heritage elevator.

Peter Rowe, a local heritage homeowner and one of the many dedicated volunteers now caring for this community space, explains that Heritage Acton “sees the Town Hall as an anchor in downtown Acton.” Revenue from the rental of the facility has more than doubled over the last few years.

Halton Region Mental Health and the local B.I.A. are now tenants and the Town of Halton Hills is about to convert the underutilized fire hall space (circa 1950s) into a new youth centre.

Last fall, Heritage Acton launched another ambitious capital campaign, with the goal of raising $650,000 for restoration and capital improvement projects. They also secured a federal Legacy Grant from the Department of Canadian Heritage. This $284,000 grant provides for a matching contribution toward eligible expenditures up to the amount raised by Heritage Acton. Earlier that year, the group received a National Trust Launch Pad Coaching Grant, gaining access to pro-bono training for the development of their capital campaign.

And so, the story of the Acton Town Hall continues.

Across the country, beloved historic places benefit from dedicated people who are willing to step in to save and renew these special places. Lucky for Acton, there are no shortage of these guardian angels, including Jimmy, whom some believe still wanders the halls.

Heritage Acton hosts a gala in November 2019 at the Town Hall to celebrate the 175th anniversary of Acton and raise funds for the ongoing renewal of this historic venue.

For more information on the Acton Town Hall and how to donate to their capital campaign visit www.actontownhallcentre.ca.

Made possible by the generosity of donors, the National Trust’s Launch Pad program connects communities with game-changing coaching in fundraising, marketing, and business development to save and renew places that matter. For more information visit https://regenerationworks.ca/launch-pad-grant/.