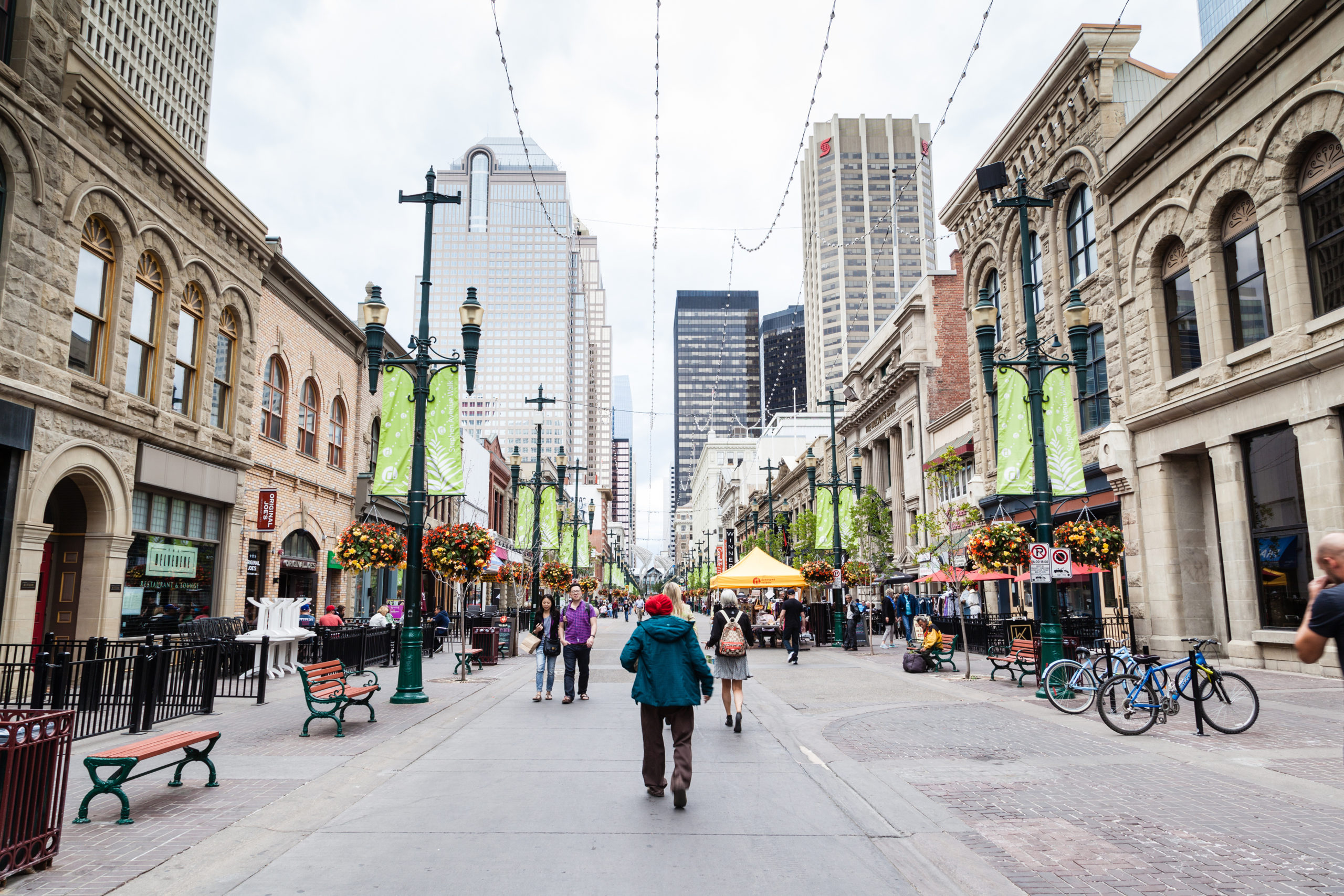 A development proposal for the most significant contiguous streetscape of sandstone buildings in Calgary would mean loss to the city’s heritage built form at an unprecedented scale.

Stephen Avenue (8th Avenue SW) is the historic commercial heart of downtown Calgary and holds exceptional cultural, architectural, and community value. Calgary’s most iconic street, Stephen Avenue is a well-preserved commercial district of almost three dozen historic buildings – many constructed of sandstone and vividly bearing witness to Calgary’s emergence as the “Sandstone City” after the Great Fire of 1886. Stephen Avenue is the city’s premier heritage district and the last remaining critical mass of historic buildings in a downtown transformed by office tower development during the oil boom of the 1970s.

Stephen Avenue has a profound and enduring value to the people of Calgary. In response to the ongoing demolition of historic buildings in the area in the 1970s, the Government of Alberta and the City of Calgary moved to preserve a sense of place along Stephen Avenue by designating four mid-block and end-of-block buildings as heritage, and there are now multiple provincial and municipal designations in the area. In the 1980s, there was a decade-long public and private sector funded program to rehabilitate 34 of the area’s heritage buildings for economic reuse with public grants up to $200,000 for facade restoration matched by the private sector’s rehabilitation of the buildings’ interiors.

A Land Use Application and development permit has been submitted by real estate firm Triovest for the city block comprising Stephen Avenue (8th Avenue) and 7th Avenue SW between Centre and 1st Street SW. Called the Stephen Avenue Quarter, the multi-phase proposal includes plans for an office tower, two residential towers (one the tallest in Calgary at 60+ storeys), retail space, and a hotel. Of the 17 sites of heritage significance that fall under the development (the highest concentration of heritage buildings in a single downtown block), the proposed plan appears to propose demolition of all but one of these sites (Central Methodist Church), while retaining only six façades along Stephen Avenue:  The Norman Block, Clarence Block, Tribune Block, Molson’s Bank, Calgary Hardware, Hudson’s Bay Company Department Store (1891) – all reduced to façades only.

The plans would require the de-designation of 5 municipally designated sites to facilitate demolition (the Tribune Block and four buildings along 7th Avenue), the formal approval by City of Calgary to allow demolition of one municipally designated site to retain only the façade, and formal approval by the province to allow demolition of one Provincial Historic Resource (the Molson Bank) to retain only the façade.  If it proceeds, this mass de-designation would seriously undermine the system of legal protection of heritage sites in Alberta. The majority of the remaining properties impacted by the proposal are listed on Calgary’s Inventory of Evaluated Historic Resources, indicating that they merit municipal designation. Importantly, a portion of the development footprint is included in the Stephen Avenue National Historic Site whose status would also be called into question. 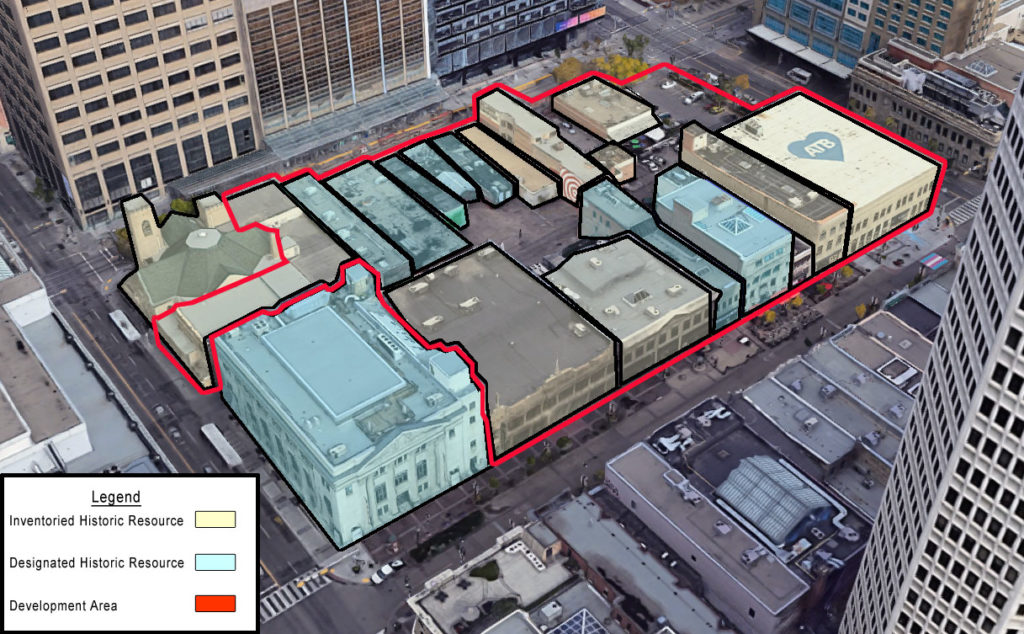 What needs to change:

The heritage values of the designated properties within the development footprint of the Stephen Avenue Quarter are clearly identified. Alterations to these heritage designated properties will require formal approval by Alberta’s Minister of Culture (Calgary MLA Jason Yuan) or the Mayor and Calgary City Council. These properties were given heritage protection, often decades earlier, in response to intense public pressure, and their future now rests in the hands of these elected officials.  While heritage designation is not about freezing properties in time, the degree of intervention, change and loss suggested by the proposal far exceeds what any reasonable citizen would find acceptable treatment for nationally significant heritage resources.

The National Trust believes Canada’s cities need policies and laws that ensure the retention and reuse of existing buildings as an essential response to the climate crisis. Upholding heritage designation and promoting reusing and upgrading existing buildings – as opposed to their demolition and replacement with new buildings, even energy efficient “green” ones – would have a substantial immediate and long-term impact in achieving Canada’s GHG emission targets. Capitalizing on the embodied energy of existing buildings and avoiding the carbon emissions and other environmental impacts arising from the resource extraction, material fabrication and construction of new buildings, is a value that cannot be overemphasized. Policies that promote building reuse would encourage the public and private sector to leverage their built assets as a productive form of climate action.

Canada also needs catalytic and transformative federal financial measures like the Federal Historic Rehabilitation Tax Credit in the United States, which have successfully worked to counterbalance the demolition/new construction advantage. Since its launch in 1976, the US program has leveraged $102.64 billion in private investment (5 times the value of the federal tax credits provided), created over 130,000 jobs each year, preserved 45,383 historic properties, enabled 172,416 affordable housing units, and avoided vast GHG emissions.

Follow the local advocacy efforts of the Calgary Heritage Initiative and the Save Stephen Ave campaign.