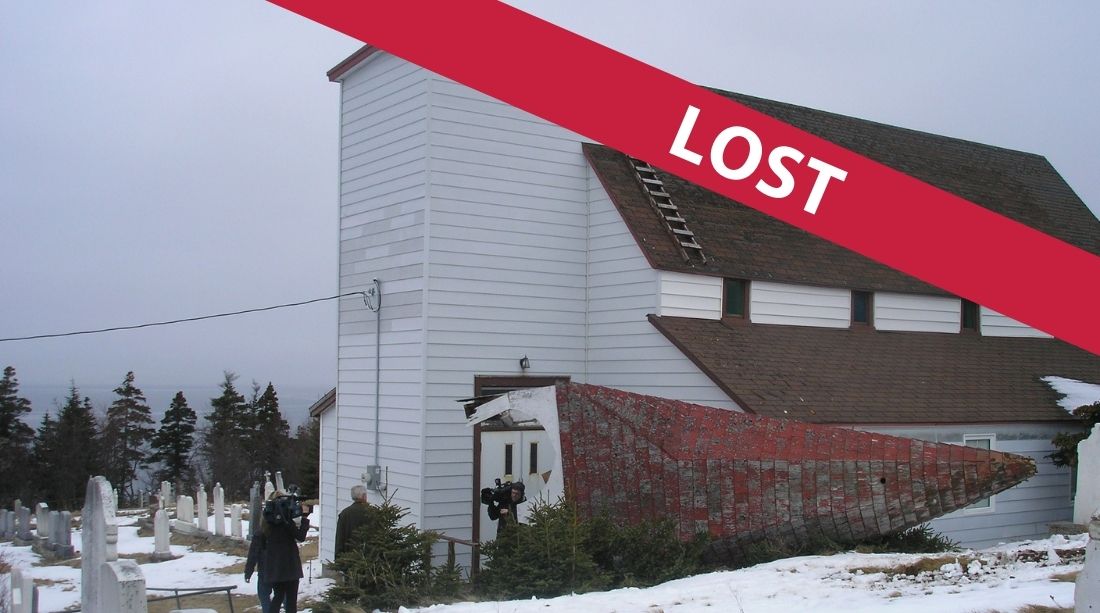 Vandals brutalized the 115-year old St. Philip’s Anglican Church by ripping off its steeple after the Town of Portugal Cove-St. Philip’s refused the Diocese’s application for a demolition permit. After Council designated the church a Municipal Heritage Structure, a parishioner allegedly attempted to destroy its pews. The volunteer group The Church By The Sea Inc. and the town council are working to find a solution that would save the historic church.

Once seen as the centre of the community, St. Philip’s Anglican Church was built in 1894 on the foundation of the original 1848 structure. Known as the Church By The Sea, it is the oldest surviving church building in the town of Portugal Cove-St. Philip’s. Built in a simple Gothic Revival style, it is set high on a bluff overlooking the sea and has been a beacon to mariners for years. Community ancestors built the church where generations were christened, confirmed, married and buried. The oldest headstone in the adjacent cemetery dates to 1801.

Closed since the construction of a larger church nearby in 2003, the old church has been used to store recyclables. Although still structurally sound, it is beginning to deteriorate from neglect; the furnace has been disconnected and the roof is in need of repair. Last March, town council rejected an application by the Diocese to demolish. The following day, the church was brutally vandalized. The steeple was sawn through and pulled down. The town quickly responded by designating the church a Municipal Heritage Structure at an emergency meeting, posting security at the site and requesting a temporary injunction to prevent further demolition. Just days later, residents of Portugal Cove-St. Philip’s witnessed a parishioner loading church pews into a truck and trailer. The man was allegedly following instructions from parish officials to cut them into shelving for the new church. The Church By The Sea is running out of time.

A local non-profit volunteer group, The Church By The Sea Inc, wants to save the deconsecrated building and use it as a local museum. Additional support has come from the Heritage Foundation of Newfoundland and Labrador, the Newfoundland Historic Trust and from provincially and federally elected representatives.

The mayor and council has authorized the group to provide volunteer security for the site to help prevent future vandalism. The group submitted a 13-page proposal to Rev. Edward Keeping offering to look after the building financially and suggesting sources of funding. A petition also went around town which garnered 600 signatures, 150 of those being from members of the parish.

In April, the Diocese appealed Council’s decision to refuse a demolition permit and designate the property a heritage structure to the Municipal Appeals Board. Stephen Sharpe, president of The Church By The Sea Inc., says the group is prepared to use volunteers with the appropriate skills and equipment to repair and raise the steeple back onto the church tower. In the meantime, the steeple sits where it fell last March.

Update: In 2013, the Diocese successfully appealed a Town Council Order that the Diocese repair the damaged church. In October, 2014, the bishop gave the parish of St. Philip’s permission to proceed with another application for demolition on the understanding that the parish intends to create a memorial park and columbarium on the site. On April 25, 2015, after a long and acrimonious debate, Town Council voted in favour of demolition. The decision was quickly followed by two separate appeals that will be heard by the Municipal Appeal Board Review on June 19.

Update: In September 2015, a demolition permit was issued for the church. Demolition work began soon thereafter. 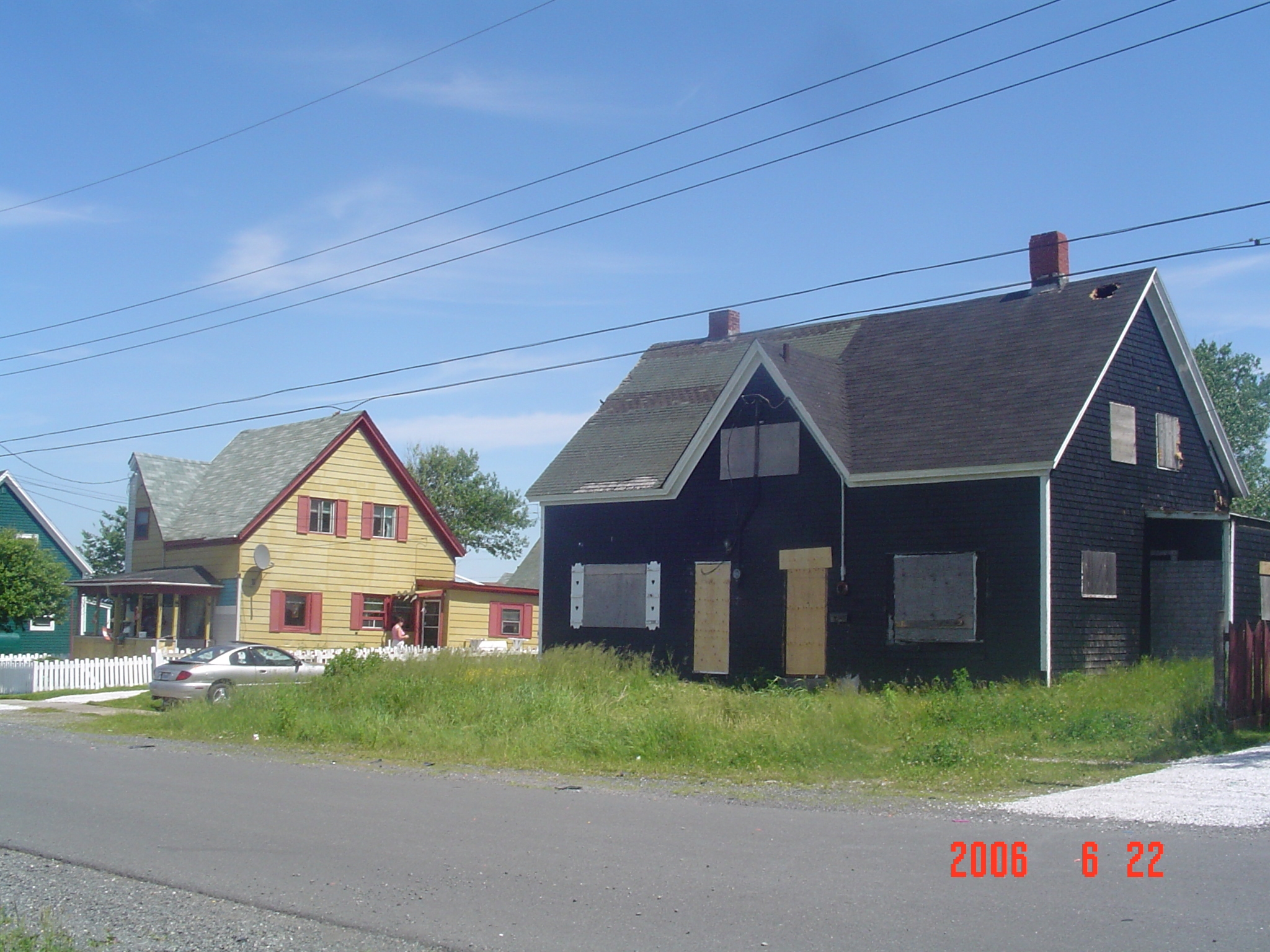 The once prolific workers cottages, known as “company houses,” that dotted the landscape of industrial Cape Breton are beginning to... 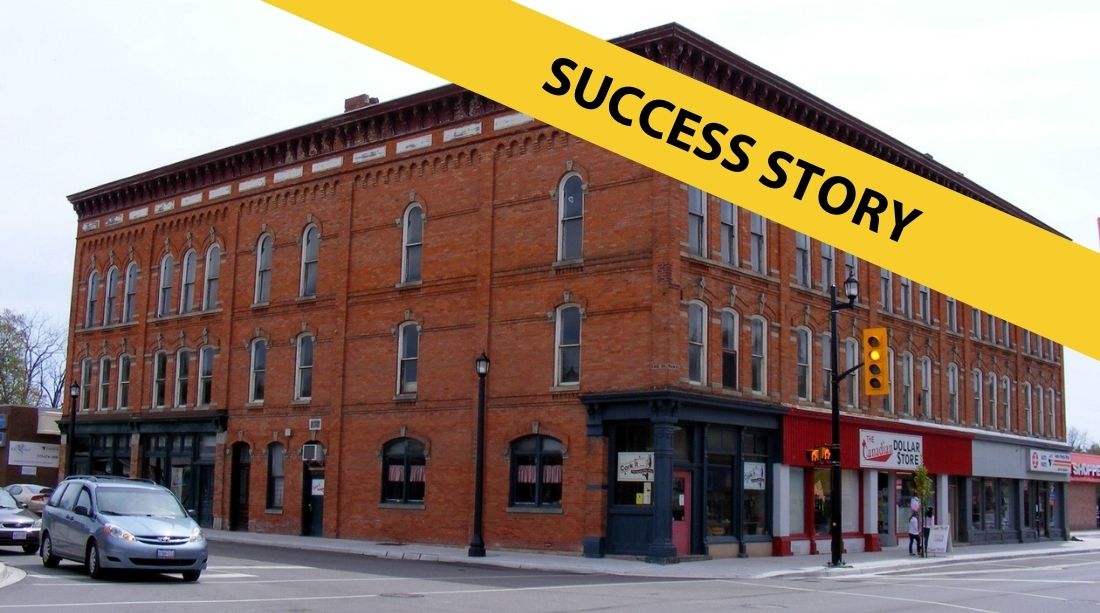 A CASE OF DEMOLITION BY NEGLECT This designated privately owned heritage building—home to one of the last remaining intact opera...