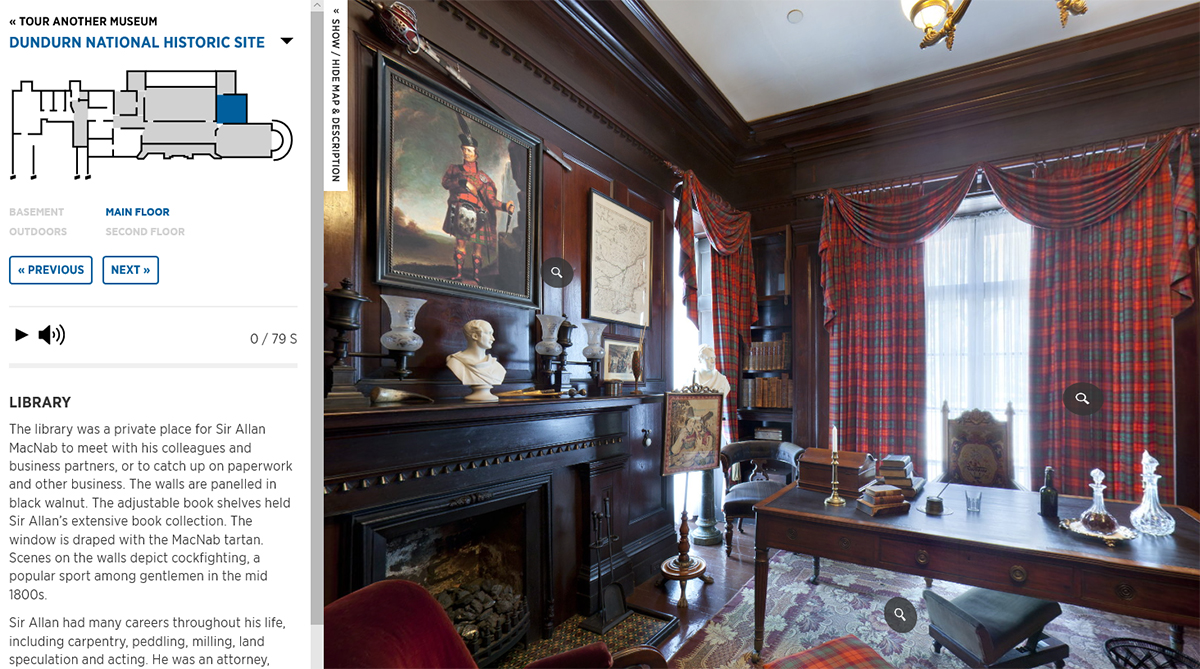 As a result of the COVID-19 pandemic most historic places are temporarily closed to the public. Many of us are looking forward to better times when Canada’s historic places will once again be open to the public. But for right now there are many ways to ‘visit’ and discover lots of interesting places online, with apps, VR tours, and games to keep the whole family busy. Here are some of them.

Fort Odanak – Odanak, PQ
Fort Odanak, built in the 18th century on the orders of Louis XIV, King of France, was inhabited by the Abenakis, one of the First Nations of America, and served as a rampart against Iroquois and British raids in the St. Lawrence Valley. Explore the physical remains of the fort and the site’s different occupations in this virtual exhibition.

Pointe-à-Callière, Montréal Archaeology and History Complex – Montreal, QC
Explore some of Pointe-à-Callière’s permanent exhibitions online, such as Where Montréal Began, the Memory Collector, 1701 – The Great Peace of Montréal, and certain sections of the Building Montréal exhibition.

Ireland House Museum – Burlington, ON
Learn about the Ireland family and immerse yourself in Burlington’s agricultural roots through their virtual tour.

Diefenbunker Museum – Carp, ON
Visit Canada’s Cold War Museum through their VR tours! Explore four floors of the bunker from any device and even with VR goggles if you have them.

Murney Tower – Kingston, Ontario
Built in 1846 as part of the fortifications of Kingston, Murney Tower has three floors displaying a collection of military and domestic artifacts of 19th-century Kingston. Experience the tower through this virtual tour, which features 360 degree views.

Dickinson House – Manotick, ON
In 1867, Moss Kent Dickinson built a large, two and a half-story clapboard building, facing his grist mill.  In choosing the building design, Dickinson, who was born in New York State, used a New England architectural style and placed it into an Ontario setting. Tour the historic building online.

Watson’s Mill – Manotick, ON
Watson’s Mill is an 1860s grist and flour mill that continues to grind flour, using the same technology that existed when it opened. Explore the museum online through their 3D VR Tour.

Moore Museum – Mooretown, ON
With descriptions and vintage images, you can discover the “Vanished Villages of the Moore Township” with Moore Museum’s virtual exhibit.

Bytown Museum – Ottawa, ON
Explore Ottawa’s history from the comfort of your home. View the museum’s 3D VR tour and follow along with an audio guide available in six languages.

Senate of Canada, Parliament Hill – Ottawa, ON
Experience the glories of the Senate of Canada’s rooms in this state-of-the-art virtual tour, The Senate Virtual Tour: Your Digital Admission to the Red Chamber.

Casa Loma – Toronto ON
Visit Canada’s Majestic Castle, Casa Loma and step back in time to a period of European elegance and splendor. Completed in 1914, it took 300 men nearly three years to complete the almost 200,000 square foot castle at a cost of $3,500,000 (at the time). Today you can explore the castle online.

The Elgin and Winter Garden Theatre Centre – Toronto ON
The Elgin and Winter Garden Theatre Centre in downtown Toronto was built in 1913 and originally designed for vaudeville performances, the theatres were meticulously restored to their original grandeur in the 1980s by the Ontario Heritage Trust.  For now, while the world is social distancing, you can experience a 3D VR tour complemented by a series of stunning photos.

Writing-on-Stone / Áísínai’pi UNESCO World Heritage Site – Warner County, AB
In this immersive VR experience, Sacred Teachings: Áísínai’pi | Writing on Stone, Blackfoot Elder Saakokoto Randy Bottle joins Blackfoot actor Eugene Brave Rock to bring audiences on a guided journey through this beautiful sacred landscape. While this experience requires an Oculus headset and software (common among gamers), there is also a video available that gives us a taste of this extraordinary place.

Claybank Brick Plant National Historic Site – Regina, SK
Claybank is the best preserved, early twentieth century brick plant in North America. Claybank bricks were used in some of Canada’s finest buildings, in the boilers of Naval ships and in the launch pads at Cape Canaveral. Enjoy a video outlining their history.

Dalnavert Museum – Winnipeg, MB
This Victorian mansion in downtown Winnipeg is a time capsule of the late 1800s and early 1900s. While the site is closed, you can still access all three floors and revel in its richly decorated spaces via an online virtual tour.

Langley Centennial Museum – Langley, BC
Visit the museum’s temporary exhibition “The Sporting Life: A History of Athletic Fashions with Ivan Sayers” and the permanent history gallery in a 360 virtual exhibition.

Gulf of Georgia Cannery National Historic Site – Richmond, BC
Discover over 200 salmon canneries in British Columbia! The long and complex history of salmon canning in British Columbia is as much about coastal communities, technological innovations and environmental changes as it is about bringing food to market. Follow each step of the canning process from tide to tin as you learn what it was like to work in a cannery.

Fort Conger – Ellesmere Island, NU
Through the virtual exhibit, Science and Survival at Fort Conger, you are all able to explore the history of this abandoned artic outpost that was built in 1881 and played a key role in international exploration during the late 19th and 20th centuries.

Do you know of a great virtual tour of your favourite historic place? We want to know about it! Email Sonja Kruitwagen at skruitwagen@nationaltrustcanada.ca or tweet us at @nationaltrustca

Do you know of a great virtual tour of your favourite historic place? We want to know about it!