Support for historic places in Canada 2017

On December 1, 2016, a Private Member’s Bill by Peter Van Loan (York-Simcoe) to create tax credits for historic places was tabled in the House of Commons.  Bill C-323 – An Act to Amend the Income Tax Act (Rehabilitation of Historic Property) – is based on a great US federal tax credit success story with a 40-year track record.  For the first time in decades, this Bill has restarted the conversation in Parliament about the need for a broader federal role in saving Canada’s historic places. Bill C-323 presents an historic opportunity to tell elected officials from every political party that Canada’s historic places matter, and that federal actions can help save and renew them.

The Liberal Party of Canada expressed their willingness to consider financial incentives for historic places in their October 2015 pre-election message to the heritage sector.  Responding to written questions from the National Trust for Canada, Liberal Party president Anna Gainey wrote:

On November 28, 2017, the House of Commons Standing Committee on Environment and Sustainable Development (ENVI) recommended that Parliament not proceed with Bill C-323. It did, however, indicate its strong support for federal tax measures for Canada’s historic places in its ground breaking report Preserving Canada’s Heritage.

The next year will be a critical one for the heritage sector.  This is a time for every heritage leader and organization to be engaged and informed. We strongly believe that our individual and collective responses must be loud, strategic and coordinated. 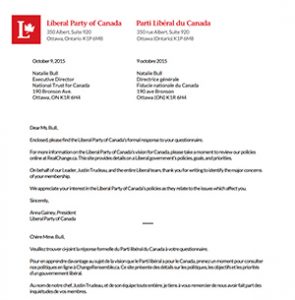