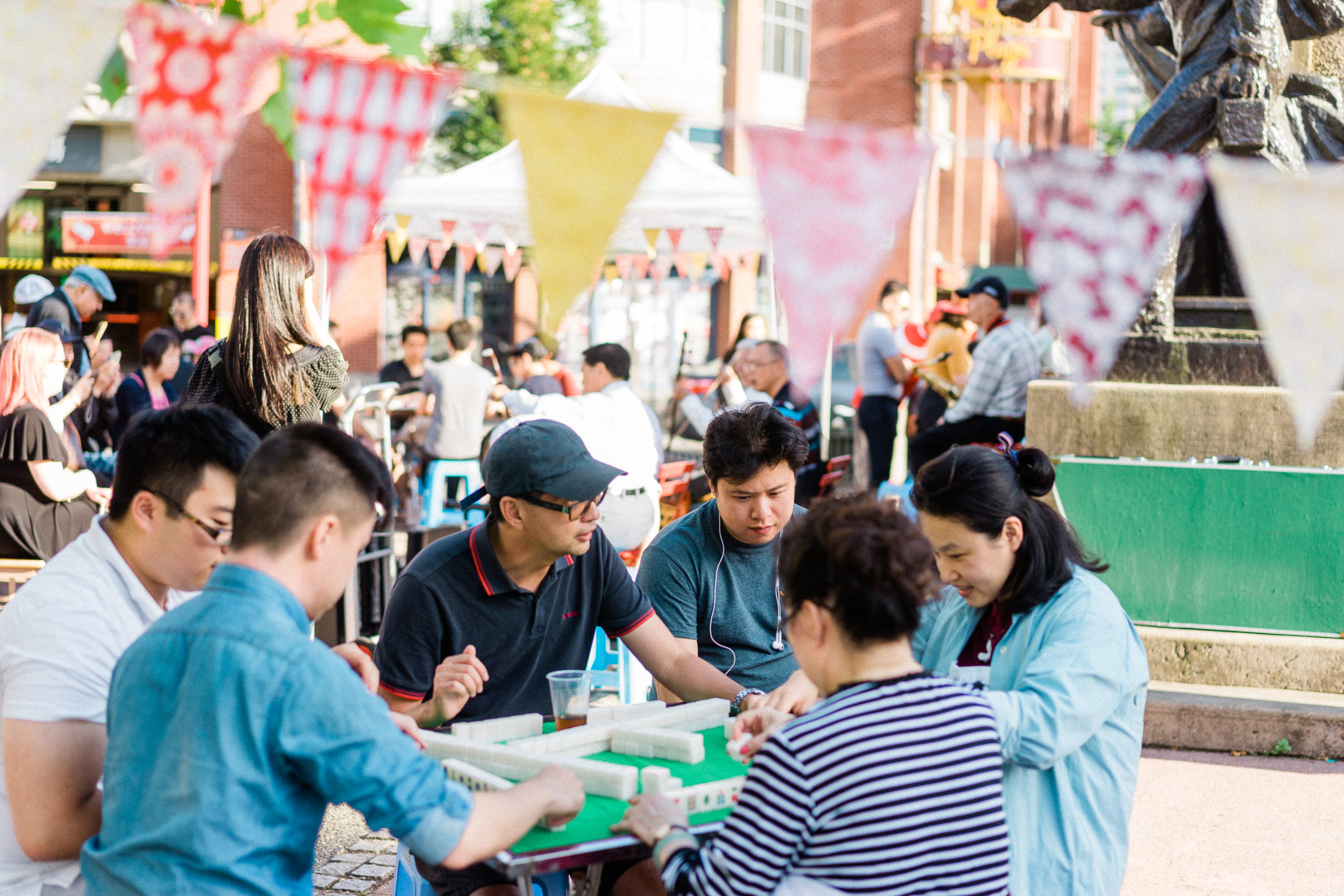 Place-keeping in Vancouver’s Chinatown: Reviving a Threatened Area with “Hot and Noisy” 熱鬧 Mahjong Nights and a Historic Cantonese School

In 2015, the historic Chinatown neighbourhood in Vancouver’s downtown eastside was at a tipping point. Surging development pressure threatened its historic buildings, property speculation was driving up rents and driving out long-time residents, many of them seniors, and its once vibrant street life was fading. This extraordinary district, Canada’s leading Chinatown for much of the 20th century, was in danger of losing both its physical character and its soul. Heritage Vancouver and the National Trust placed Vancouver’s Chinatown on their respective endangered places lists.

Enter Youth Collaborative for Chinatown 青心在唐人街 (YCC), a dynamic group deploying small-scale tactical urbanist events, leveraging urban planning and communications savvy, and reopening a historic Cantonese language school. Co-founded in 2015 by Doris and June Chow, Claudia Li, and Kathryn Gwun-Yeen Lennon, YCC’s goal has been to strengthen the connection between people and the place of Chinatown and reveal the interconnections between its tangible and intangible heritage. And over the past five years, they have had a dramatic impact. They’ve helped to rekindle the spirit of the neighbourhood, refocus City planning attention, and turn its future from bleak to hopeful.  “The temptation,” Doris Chow explains, “was to just go the institutional route and focus on planning tools and reports. We quickly realized there is often too much planning, and not enough doing, so we put our emphasis on community animation.” Their innovative advocacy through cultural expression is bearing fruit. Vancouver’s Chinatown is now serving as a beacon of hope and offering a tool box/strategic insights for other struggling ethnic neighbourhoods across North America. 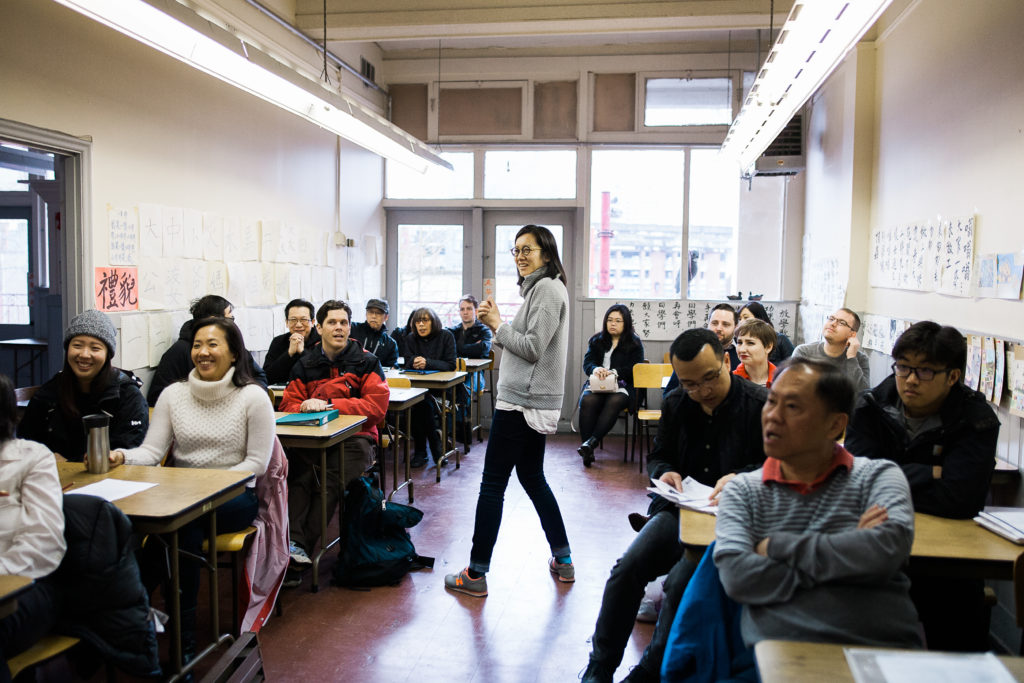 Vancouver’s Chinatown is the third oldest in North America – after San Francisco (1840s) and Victoria (1850s) – and remains one of the largest. Since before Vancouver’s founding in 1886, Chinese immigrants settled in the area of Carrall Street and Pender Street, forming a tight-knit self-segregated community, amidst racial prejudice. They brought with them architectural styles from China’s Guangdong Province whose influence is still felt throughout the neighbourhood. Unlike San Francisco, Vancouver’s Chinatown has retained many of its Clan buildings and community organizations – like the Tongs and Freemasons – sustaining the intangible heritage of the area. In the past several decades, the centre of gravity in Vancouver’s Chinese Canadian community has shifted to the City of Richmond with its dynamic night market and concentration of businesses. While Chinatown is still a place where Chinese Canadians come to shop, or to meet friends or relatives at gatherings, weddings or cultural events, the area’s recognition as a National Historic Site in 2011 grew out of concern for its future.

“When Chinatown’s night market ended in 2013,” Doris Chow explains, “its absence was immediately felt in the community. Organizing it and tearing it down had simply become too much work for too few customers. So, faced with this kind of depressed atmosphere, we needed to do something.” One of YCC’s first initiatives in 2015 was to mount a ‘’Hot and Noisy’ 熱鬧 Chinatown Mahjong Social.’ They chose to activate the Chinatown Memorial Square, an under-used concrete plaza at the heart of the community, one Saturday evening a month throughout the summer. Kathryn Gwun-Yeen Lennon says one of YCC’s goals was to not just cater to area residents, “It needed to be an invitation. A way for outsiders to connect with Chinatown life. Non-residents were inhibited about getting involved and needed an excuse to spend time there and get involved.” Mahjong – a Chinese tile-based game that is easy to learn, dynamic and LOUD – proved to be a great ice-breaker for warm summer evenings. These “Hot and Noisy” events now run each summer, helping spark a mahjong renaissance in the city. “Much of the conversation about Chinatown revitalization involves business,” says June Chow, “but the real value of Chinatown is the culture and the history. The Mahjong Socials have drawn city-wide attention, shown that people care about the area, and helped to keep a spotlight on Chinatown’s development pressure issues.” 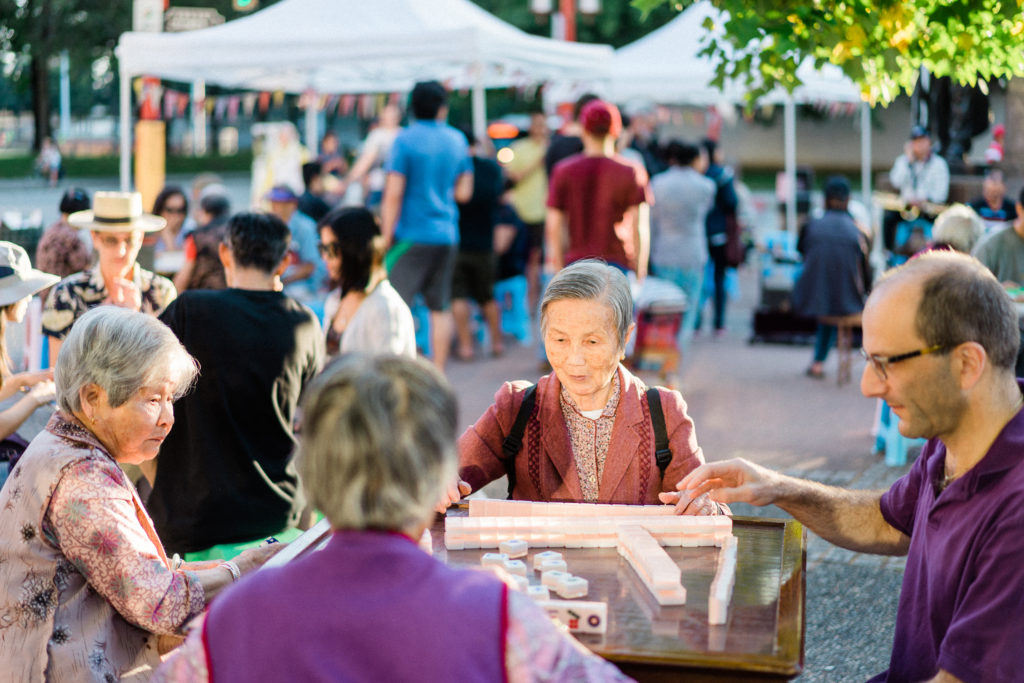 Chinese school on Saturdays has been a tradition and rite of passage for Chinese Canadians for over 100 years. Mon Keang School in the Wongs’ Benevolent Association Building (123 East Pender Street) had been a space for teaching Cantonese since 1925. So when it closed in 2011 due to declining enrollment and a demographic shift in favour of Mandarin, it left a big hole in the community. YCC came together to revive Cantonese language teaching in the old school, creating the Vancouver Chinatown Cantonese Saturday School, and developing a “place-based” learning program. The curriculum is a combination of in-classroom instruction and tours around the area where students can practice their new language skills: greeting grandparents, shopping in stores, and ordering dim sum. YCC wanted to make their “survival Cantonese” language training a living and accessible experience of place.

The school has proven so popular it now has a waiting list of 90 people, and groups in Toronto and Los Angeles are looking to follow Vancouver’s lead. The Saturday School’s student composition is very diverse: a third are adults who recognize the Chinese language as important to them and their identity; a third grew up not going to Chinese school and felt an absence; and the remaining third are non-Chinese partners wanting to connect with Chinese culture, or seniors home workers looking for deeper engagement with the clients in their care. June Chow couldn’t see this Cantonese training happening anywhere else. “It was very important that it took place in the old Mon Keang School – linking past and present. We wanted to prove a point. With old places in Chinatown, the general idea is to tear down or gut them and make co-working spaces or other trendy things. We said, ‘No, these places have a historic use that can be reused as-is.’ These spaces, like the language itself, are still relevant.” The feeling the old building exudes, in fact, is an experience and important element. Both June and Doris Chow relish the idea that generations of language students have heard the same sound on the wooden stairs as they ascend to the school room on the third floor – the building echoes with meaning and memories.

These days, the future is looking brighter for Chinatown. The City and Province are spearheading a nomination of the storied area for a UNESCO World Heritage Designation and hope it will be the first Chinatown in the global diaspora to be recognized. Doris Chow feels the World Heritage Site designation bid should be shaped around recognizing both the tangible and intangible dimensions of this layered place. But how to quantify those pieces and anchor those practices and rituals which animate the space? 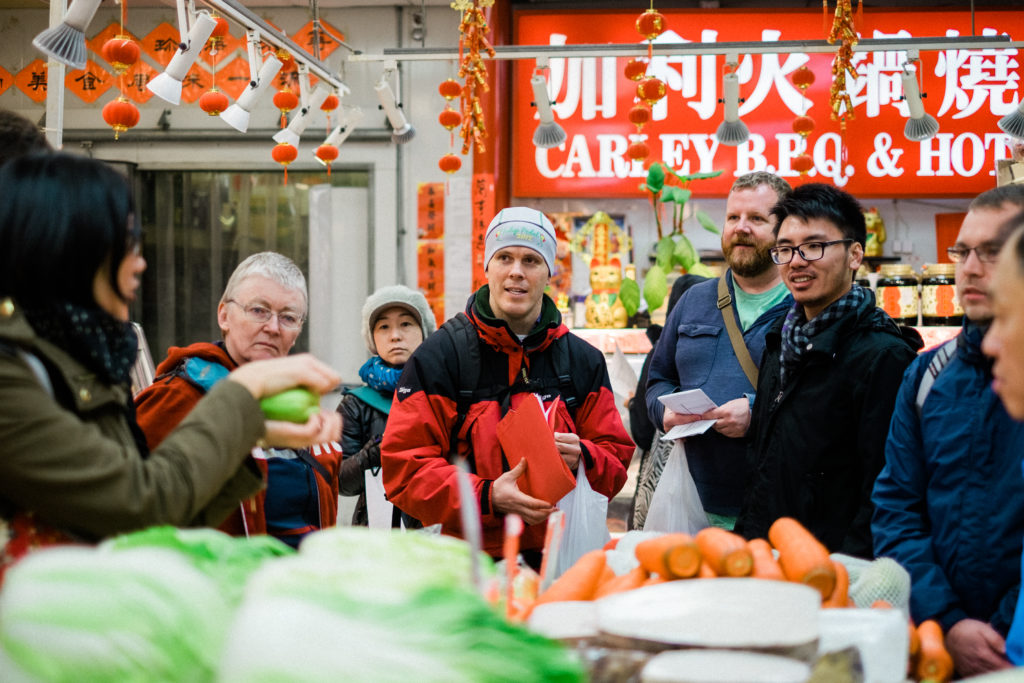 Recently, other historic neighbourhoods in Vancouver and beyond took the animation of Chinatown as an example to be followed. The Japanese Canadian community in Vancouver has been working to rebuild the “Japantown” area around Powell Street, particularly vibrant before Japanese internment during WWII. Similarly, Hogan’s Alley on Chinatown’s southern fringe, was home to Vancouver’s Black community for much of the 20th century. Beginning in 1967 much of the area was demolished for the Georgia viaduct freeway project, but efforts are now underway to revive and reanimate the area, building on the lessons from Chinatown. The Punjabi Market area on Main Street in South Vancouver – an ethnic hub since the 1970s – is also looking to get its mojo back. YCC’s influence extends to central Canada where there are now Mahjong Social Nights at Tea Base on Toronto’s Spadina Avenue, and in Ottawa’s Chinatown.

This spring, YCC was awarded two Heritage BC awards for “Education, Awareness and Communication” for their pathbreaking work with the Mahjong Socials and Cantonese School. The pace of development in Vancouver is aggressive, however, and will push YCC to act quickly with new efforts at the community level, as they work to preserve traditions and built fabric in a rapidly evolving context. “Planners often ask us, ‘What’s the formula? How can this be done in other parts of the city?’” Doris Chow reflects. “They also talk a lot about placemaking. But really, it’s about place-keeping. There is already something here in Chinatown, and there’s a real desire to keep alive the place our community created over generations. We wanted to show people that this is our neighbourhood, and we’re not going anywhere.”