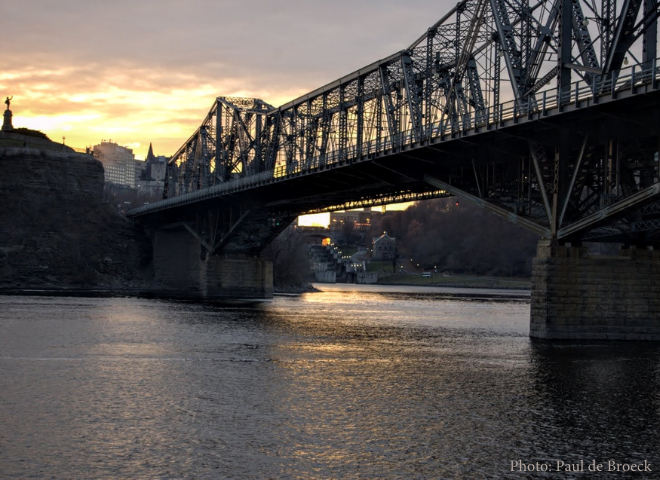 The imposing Alexandra Bridge is a key component of the nationally significant cultural landscape of the Parliamentary precinct at the core of the Canadian capital. The federal government’s announcement that it intends to demolish the bridge has raised alarms bells for citizens and organizations on both sides of the Ottawa River, in Gatineau and Ottawa.

Also known as the Royal Alexandra Interprovincial Bridge, it was built in 1898-1900 by the Dominion Bridge Company, the first Canadian company to tackle an engineering feat of this scope. It is recognized by the Canadian Society of Civil Engineering as an outstanding work of engineering due to its innovative steel truss cantilever design.

In a coordinated act of inter-provincial solidarity, advocates from the heritage, transportation and environmental sectors have formed the Alexandra Bridge Coalition. The group is reminding the federal government that the proposed demolition of the bridge runs squarely against its own policies and priorities for meeting carbon reduction targets, stimulating a green recovery and respecting federal cultural heritage. The Coalition is calling on the government to reverse its decision to replace the historic bridge, and to fully investigate options to rehabilitate the bridge for active transportation purposes.

The 2019 Ministerial mandate letter for Public Services and Procurement Canada (PSPC) Minister Anita Anand identified the replacement of the bridge as a priority, as did Federal Budget 2019. It was not until the National Capital Commission began a public consultation process in the Fall of 2020 that the public was invited to discuss this project – but only the future commemoration of the bridge (once demolished) was presented.

At no point were the public or municipal officials on either side of the bridge allowed to provide input into the demolition decision. A Life Cycle Analysis Report commissioned by PSPC in 2018 recommended that several additional studies were required before making a final decision on whether to repair or replace the bridge, including a heritage assessment. Those studies do not appear to have been completed before the announcement to demolish in 2019.

In the absence of federal heritage legislation, there is no process to evaluate heritage engineering assets, nor is there any protection that would require an appropriate review prior to any major alterations or demolition. The Ministerial mandate letters of two other Ministers include ensuring the protection of federal heritage assets – like the Alexandra Bridge – a direct conflict with the mandate letter of Minister Anand.

The planned demolition of the Alexandra Bridge without any heritage review process or meaningful community consultation is symptomatic of the absence of legislation for federal heritage assets, and makes the government’s current work to create this long-needed legislation all the more urgent. It also contradicts the federal government’s recently announced climate change targets and emphasis on green recovery.

It is particularly unsettling that one of the justifications provided for the demolition of an existing historic bridge is to improve vehicular traffic into the residential cores of Gatineau and Ottawa – cities that are actively seeking to limit vehicular traffic within those historic neighbourhoods.

The National Trust believes the federal government needs to provide bold leadership in addressing the climate crisis, and central to those efforts should be the retention and reuse of existing buildings and structures. Demolishing a historic federal bridge and increasing vehicular traffic is a major step in the wrong direction, and sends the wrong message to other governments and the private sector.

The Alexandra Bridge Coalition wants you to send a letter to the Prime Minister and the Minister of PSPC.
Find the Coalition’s media release and the easy-to-use form letter here: MEDIA RELEASE  LETTER

Location: Ottawa, ON and Gatineau, QC