Transformative Projects: Projects completed between 2013 and 2018 that have creatively renewed or transformed historic places or landscapes for new uses. 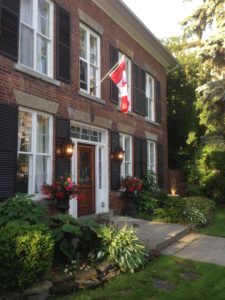 This impressive 1814 Georgian residence, once an important stop for many travelers to Upper Canada and later the first building in Cornwall to receive a heritage designation, fell on hard times, and by 2013 was in dire need of rehabilitation. Water was pouring through the ceiling into the kitchen, many of the building’s windows were broken, and the heating and water systems were no longer operational. Happily, the building was spotted by Robert Prowse, a television and radio producer and Heritage Toronto board member. He purchased the property and spent the next 11 months restoring and restoring it to once more serve its original purpose – a small inn. 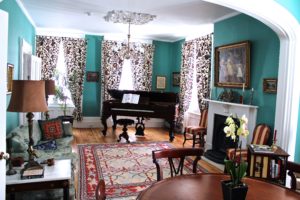 As the building had seen many unsympathetic alterations over the years, and given its deteriorated condition, rehabilitating the building while respecting its original character was no small task. The careful attention to detail has paid off – the Inn was recently listed as one of the top 30 five-star hotels in Ontario, and it now welcomes guests from around the world. This labour of love has saved and revitalized an important part of Cornwall’s history, and has transformed an eyesore into a positive economic contributor. 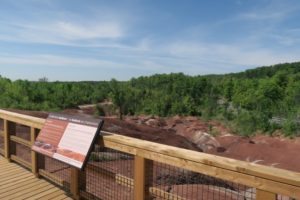 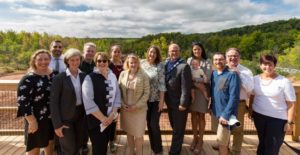 The project successfully achieved its objectives of improving the visitor experience while preventing further erosion of the fragile landscape. The scope included the enhancement of a recreational trail system that connects the Badlands to the Bruce Trail and a newly constructed accessible parking lot; new boardwalks, viewing platforms and fencing; and improved wayfinding and educational and interpretive signage. The project’s multiple successes result from an exemplary planning and stakeholder engagement process and careful implementation. 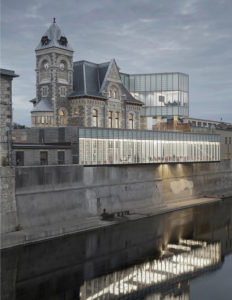 Until 2012, Cambridge’s 1885 masonry post office, listed as a National Historic Site and located on the bank of the Grand river, was in serious disrepair. The community in Cambridge saw this as an opportunity to preserve a historic building while creating new social infrastructure. A collaboration between the City of Cambridge and Idea Exchange, the project involved wrapping a 9,000-square-foot transparent pavilion around two sides of the the old structure, while sensitively rehabilitating the original building. Today, the building, now called The Old Post Office and Idea Exchange, houses Canada’s first “bookless” library. 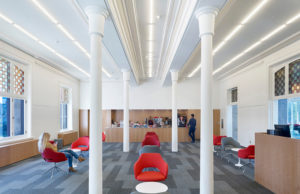 An arm of the Cambridge Public Library, the structure offers Cambridge residents free access to an array of spaces for learning and creativity, including a black box theatre, film and audio recording suites, a laser cutter, 3-D printers, soldering stations, vinyl cutters, and wood and metal workshop tools. A floating glass boardroom and a large exterior rooftop terrace and green roof overlook the river and provide up-close views of the heritage building, including its newly restored slate roof. The creatively reconceived Old Post Office and Idea Exchange has blended the old and the new to revitalize the building to be a distinguished landmark for all ages of the community and a hallmark of innovation. 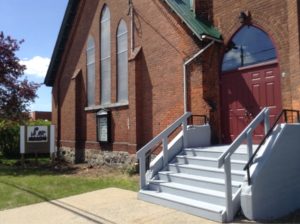 As congregations continue to shrink, the question of what to do with old church buildings becomes increasingly pressing. Such a question arose for St. John’s Anglican Church in Chapleau, Ontario. The structure, built in 1908, is one of the last remaining historic structures in the township of 2,000, residents, and by 2015 was badly in need of repair. Jason Rioux, born and raised in Chapleau, agreed to purchase the building and lease back the chapel to the congregation for a nominal fee, so that their worship can continue. Working with Small, a not-for-profit that assists with adaptive reuse projects in small communities, Rioux converted the basement of the old church into a multi-use space conceived of by the whole town. 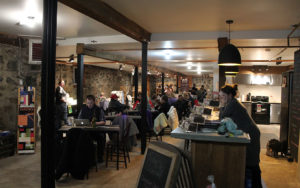 Now, the space serves as a hub to spur and support local entrepreneurs and hosts a licensed restaurant that serves wood-fired oven pizza. It also offers a shared space often used by fitness programs, children and youth programming, women’s shelter meetings and weekly movie nights. The Chapleau Hub serves as a great example of community involvement in an adaptive reuse project, with the potential to inspire similar projects across the country. 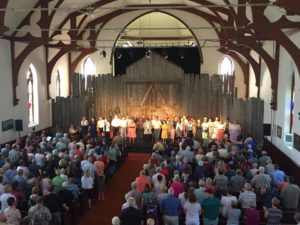 When a 110-year old Catholic church in a rural Ontario community was closed and scheduled to be demolished in 2012, a group of volunteers banded together to save to building. With no other public building in over 15 km in any direction, they knew that without a central venue to hold programs and meet, the Kingsbridge community members would become isolated. In three short years, over 550 volunteers had raised the funds to purchase the building and contributed much of the labour needed to complete the renovations required to host a concert and theatre series. 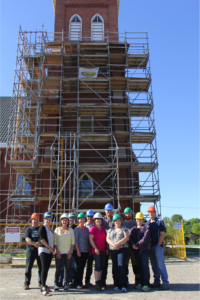 The Kingsbridge Centre Project was nominated by Roger Watt. 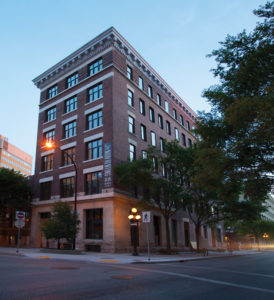 The rehabilitation of the Porter/Galpern building stands out as a shining example of the capacity of historic buildings to adapt to new uses and meet contemporary community needs. The building was constructed in 1906 for the James Porter and Company, a crockery and china wholesaler, and was subsequently taken over during the 40s by the Galpern Candy Co., a family-owned company producing fine candy. It later served as nightclub until it was abandoned in 2004. Left vacant and deteriorating for a decade, it was acquired by Alston Properties Ltd. and carefully retrofitted as a residential conversion under the leadership of Bryce Alston. 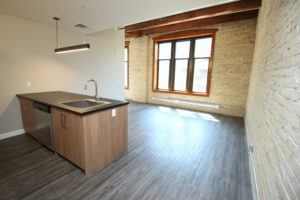 The interior was divided into more than thirty apartments and four townhouses with a rooftop deck, and was fully occupied by new residents in 2018. The building now not only provides much needed affordable rental housing to Winnipeg’s downtown, its conservation has also had a significant contribution to the social and cultural vitality of the streetscape. 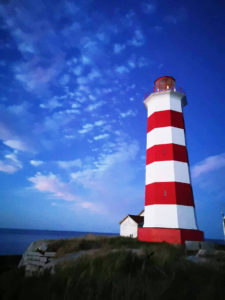 Sambro Island Lighthouse began operations in 1760 and it has been in continuous operation since, making it the oldest lighthouse in Canada and the longest serving lighthouse in North America. However, as the light was automated during the 1900s and visits to the lighthouse became infrequent, damage done to the building often went unnoticed for many months. As a result, the building suffered severe water damage to the wood interior. 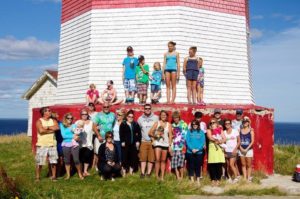 After careful assessment and analysis, Taylor Hazell Architects, with Read Jones Christoffersen and Quinan Construction, began work on the structure in 2015. Over the next two years, they conserved the spiral stair, mast structure, windows and white cedar shingles, repointed the masonry, and executed concrete repairs. The lantern’s severely deteriorated steel, aluminium and glass also received careful conservation treatments. The preservation and recovery of the Sambro Lighthouse as a community-driven project has had an important and transformative effect on the economy, education and the people who are keepers of the living history of the region. 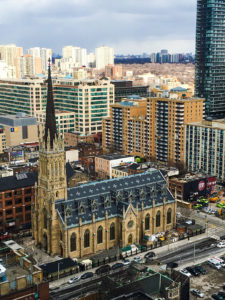 The seven-year rehabilitation of the St. Michael’s Cathedral, completed in September 2017, took great pains to respect the integrity of the original 1848 Gothic Revival design of architect William Thomas. This massive undertaking, which required close collaboration between the owner and design team, addressed significant conservation issues for the building’s envelope, including ornamental sandstone statues and details, slate and copper roofs, and stained glass windows. Inside, the hand-carved millwork and pews, plaster moldings, hand-painted ceilings and ironwork railings, among other elements, were painstakingly conserved. 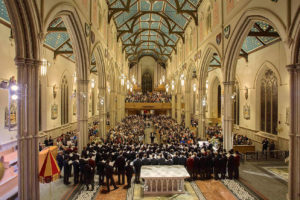 Delicate interventions were also required to accommodate the building’s contemporary purpose such as a new organ balcony in the Nave, an integrated security system, CCTV audio and video recording, and new theatrical lighting throughout. The multi-year project purposefully offered mentorship opportunities to young craftsmen and heritage professionals of the Cathedral.

When the Annapolis Royal Regional Academy, a beloved 1939 Beaux-Arts school building, was threatened with demolition in 2013, a group of residents from the town of Annapolis Royal took on a challenge: to find an appropriate new use of one of the town’s visual anchors. After much searching, in 2015 they attracted condo developer Tim Tanner, who purchased the property with the commitment to repurpose the building’s gym and library for the community. 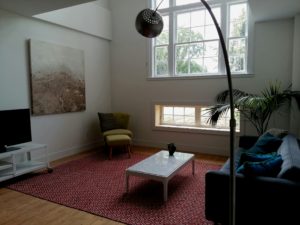 After a long process of fundraising and remodeling, the historic structure now houses 39 condominiums units, a gym, a bouldering wall and climbing club, and a state-of-the-art library. This heartening example of collaboration between a developer and community is another tangible demonstration of how a historic building facing demolition can be successfully be regenerated into a multi-use community hub while preserving the town’s heritage.

Resilient Places: Owners and organizations using historic places or landscapes in ways that illustrate extraordinary resilience, significance, and benefit to a community over a sustained period of time, with a successful track record of 10 years or more. 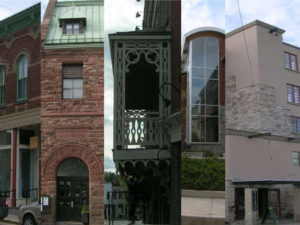 Over the past 25 years, an informal group of investors and visionaries in Almonte, Ontario, have been passionately working to conserve their town’s built environment. The Almonte Heritage Redevelopment Group, led by Stephen Braithwaite, has tirelessly protected and redeveloped five key sites – the Old Almonte Post Office, the Victoria Woollen Mill, the Thoburn Mill, 78 Mill Street, and 65 Mill Street – along with others that anchor the town to its milling history dating back to the 1820s. After the decline of that important industry in the 20th century, many historic buildings were put at risk.

The Almonte Heritage Redevelopment Group’s philosophy – to purchase endangered structures, redevelop them in dialogue with their heritage design, and resell them – has been a key factor in the cultural and economic re-invigoration of the town of Almonte. For almost three decades, the Almonte Heritage Redevelopment Group and its network of friends and supporters have been building a community that centrally values respect for the past and a celebration of its built legacy. 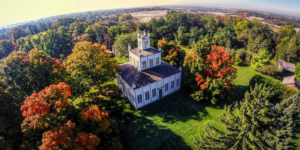 The Sharon Temple is a spectacular structure that has seen over 100 years of sustainable evolution. The structure was built during the 1820s by the Children of Peace, an Upper Canada Quaker faction led by founder David Willson. After his death and the decline of the group, the building fell into disrepair and was abandoned. In one of Canada’s earliest conservation projects, the structure was converted into a museum in 1917 by the York Pioneers and Historical Society. Over the next several decades, the site would expand to include a park and several relocated outbuildings related to the Children of Peace.

Now operated by the Sharon Temple Museum Society, the Sharon Temple remains one of the most recognizable buildings in Canada. In 2006, it was named one of the top 10 most architecturally important buildings in Canada by the Toronto Star. To share the values of the Children of Peace with a modern audience, in 2018, the museum staff added a fully accessible, sustainable garden, whose food grown is donated to local food pantries to help vulnerable residents of East Gwillimbury. Throughout the last 100 years, the Sharon Temple has left behind a legacy of equality, social justice, and peace, and remains an important site of historic conservation and remembrance.